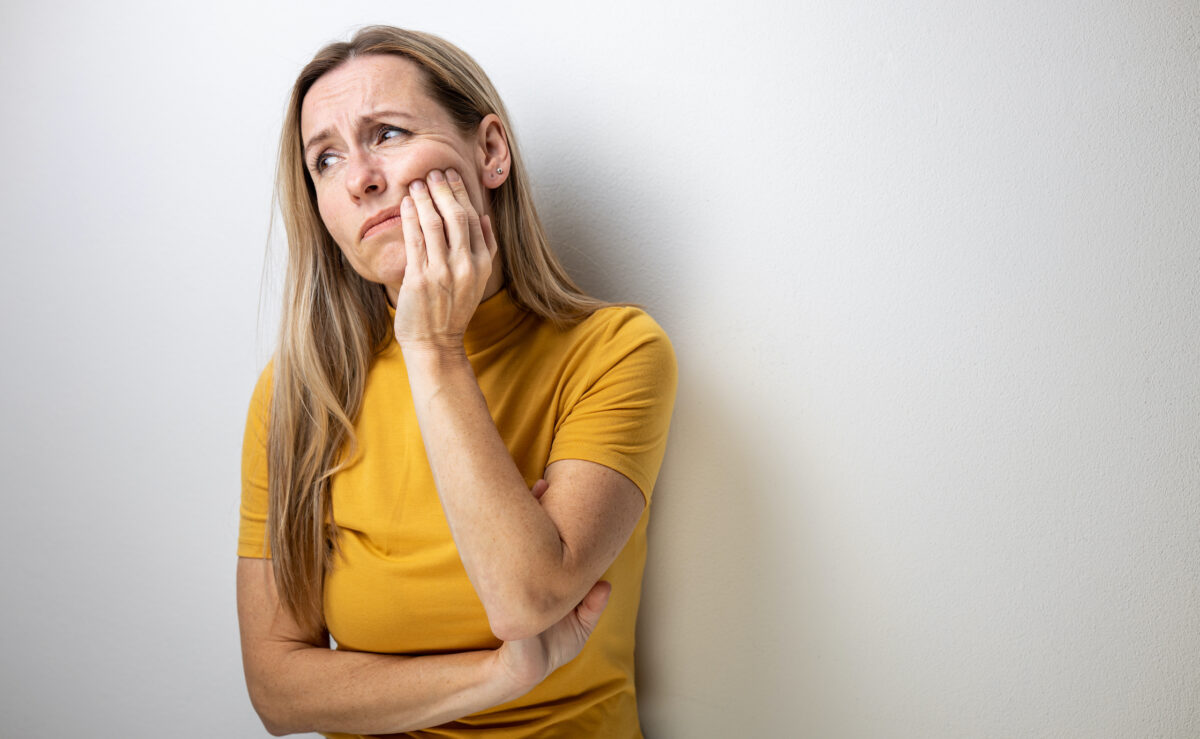 Gum disease may be an indication of an inflammatory process happening in the body and an indication the gut microbiome is out of balance. (l i g h t p o e t/Shutterstock)
Nutrition

Gum disease has an impact on your overall physical health. Current data now link it to an increased risk of mental health problems
BY Joseph Mercola TIMEJanuary 21, 2022 PRINT

A collaborative study led by researchers at the University of Birmingham looked at 64,379 people’s medical records and discovered that patients with periodontal disease have a 37 percent higher risk of developing mental health illness. The study, published in BMJ Open, also found that 60,995 had gingivitis and 3,384 had periodontitis. The data from these individuals were compared against 251,161 healthy individuals without any record of gum disease.

The researchers accounted for confounding factors, such as smoking habits, ethnicity, and body mass index. In addition to establishing the number of people with and without gum disease who also had mental health disease, they analyzed the data to determine the number in the same groups who developed cardiovascular disease, cardiometabolic disorders, or autoimmune conditions.

They discovered patients with a history of gum disease at the beginning of the study were more likely to be diagnosed with one of the health conditions in the following three years when compared against the healthy controls. The risk of mental health illness increased by 37 percent, autoimmune disease by 33 percent, and cardiovascular disease by 18 percent.

The health condition with the lowest risk was cardiometabolic disorder, but even it increased by 7 percent in people with a history of gum disease. The risk association was higher for people who developed Type 2 diabetes: 26 percent. One of the researchers, Dr. Joht Singh Chandan from the University of Birmingham, commented on the results of the study and the importance of the information in a press release, saying:

“Poor oral health is extremely common, both here in the UK and globally. When oral ill-health progresses, it can lead to a substantially reduced quality of life. However, until now, not much has been known about the association of poor oral health and many chronic diseases, particularly mental ill-health.

One of the researchers also noted that the findings suggest effective communication between dental professionals and primary care providers could help improve treatment plans that target oral health and a patient’s overall health.

Since 2009, data on the prevalence of periodontal (gum) disease in the United States has shown that between 30 percent and 47 percent of the U.S. population has some degree of periodontal disease, which has been called a growing epidemic.

In their study, the Birmingham researchers enrolled patients who had either gingivitis or periodontal disease, two of the largest diagnoses of gum disease. The data revealed an association with health conditions that are linked to an inflammatory response. A review published in Nature Reviews: Immunology, looked at several previous studies and found this mechanism is also linked to neurodegenerative diseases and some cancers, which can be the result of a chronic inflammatory response in the body.

Gingivitis is a mild form of periodontal disease in which the gums become red and swollen. They also bleed easily when brushed or flossed. Left untreated, it can advance to periodontitis. In this condition, plaque spreads below the gum line. The bacteria produce toxins that irritate the gum tissue and trigger an inflammatory response.

As the disease progresses, the gums separate from the teeth. Bacterial growth in these pockets helps destroy more gum tissue and bone that supports the teeth. Eventually, your teeth can loosen and fall out.

Other Types of Periodontal Disease

Aggressive periodontitis: This is a destructive disease that involves multiple teeth, fast progression, early onset, and the absence of systemic disease.

Pregnancy gingivitis: This appears during pregnancy and is related to the hormonal changes associated with pregnancy. Changes in what you eat while pregnant and the amount of saliva produced can also increase the risk of gingivitis.

Pericoronitis: This condition is common in 17- to 24-year-old adults. It appears where the wisdom teeth normally come through the gums and is triggered by infection over or around a partially erupted tooth. This leaves a flap of tissue that can collect food particles and result in an infection. The best preventive strategy is to brush and floss regularly.

Desquamative gingivitis: This is a rare and painful type of periodontal disease that affects the outer layers of the gum. The tissue appears red and glazed, and is easily torn, causing bleeding. It can be caused by mucous membrane pemphigoid (MMP), oral lichen planus, and pemphigus vulgaris. Endocrine disturbances, such as those during menopause, can also trigger the condition.

Caroline Aylott from Versus Arthritis commented on the importance of the Birmingham study results as they relate to patients with arthritis, especially autoimmune conditions.

“Some of the biggest challenges of arthritis, especially auto-immune conditions like rheumatoid arthritis (RA) which affects 400,000 people in the UK, is being able to know who is more at risk of developing it, and finding ways to prevent it. Previous studies have shown that people with RA were four times more likely to have gum disease than their RA-free counterparts and it tended to be more severe,” she said in the press release.

“This research provides further clear evidence why healthcare professionals need to be vigilant for early signs of gum disease and how it can have wide-reaching implications for a person’s health, reinforcing the importance of taking a holistic approach when treating people.”

Past studies have supported the evidence from the featured study. For example, one study published in 2001 with 1,412 participants found 62.5 percent of patients with rheumatoid arthritis had advanced forms of periodontal disease. They concluded that moderate to severe gum disease increases the risk of rheumatoid arthritis and vice versa.

A later study in 2010 discussed the specific oral bacterial infections that appeared to be linked to RA. The data linking periodontal disease and heart disease isn’t as consistent. The featured study found a strong link, as have other studies and literature reviews. However, other papers haven’t found a positive association.

Several mechanisms have been postulated to explain a relationship between periodontitis and cardiovascular disease. These include infection of atherosclerotic plaques by pathogens in the gums, systemic dissemination of pro-inflammatory compounds from gum disease, the effect periodontitis has on the lipid profile, or the contribution it makes to the development of Type 2 diabetes.

The featured study also found a link between gum disease and cardiometabolic disease. This is a group of health conditions that increases your risk of heart attack, stroke, and high blood pressure. These are consequences of metabolic syndrome, which is a constellation of symptoms that include belly fat, high blood pressure, impaired glucose tolerance, high triglycerides, and low high-density lipoproteins (HDL).

One study evaluated the medical records of 572 industrial workers who had medical and dental records from 2003 to 2012. The evaluation of the records in 2003 showed normal cardiometabolic values.

The researchers then compared the duration of periodontal pockets, which are a symptom of gum disease, against the progression of cardiometabolic risk factors over nine years. They found that chronic gum disease was significantly associated with these risk factors and suggested cardiometabolic disease may increase in patients who aren’t treated for periodontitis, though correlation doesn’t mean causation.

Steps to Protect Your Gums and Your Brain

Dr. Steven Lin is a dentist who uses holistic approaches to care for oral health as well as overall health. In a short video he posted on his YouTube channel, he encourages you to think of your mouth as a “gatekeeper” to your gut health and as a reminder to keep your gut microbiome balanced and healthy.

Your gums don’t take care of themselves. Eating processed and high carbohydrate foods increases bacterial growth in your mouth and the risk of gum disease. The first step to consider is optimizing your diet for your oral health and mitochondrial function by reducing your intake of hyper-processed carbohydrates.

The American Dental Association recommends you brush twice a day with a soft bristle brush and replace that brush every three to four months. You should also regularly floss between your teeth to remove plaque. While these are basic steps for oral care, there are several more steps you can take to help reduce the growth of bad bacteria and protect your overall health.

Monitor your vitamin D, K2, magnesium, and calcium levels. These nutrients work synergistically to help protect your gums, teeth, and bones. The best way to get calcium is to eat it in foods such as almonds, oranges, dried figs, low-fat dairy, and leafy green vegetables like kale and spinach. Vitamin K2 directs calcium into the bone and prevents it from being deposited along blood vessel walls. Foods high in K2 include dairy products and certain meats. Vitamin K2 also helps mediate gut inflammation in two ways, according to Lin. The first is by decreasing fibroblasts that fuel gum disease and activating matrix GLA protein that prevents calcification of the periodontal ligament and around the body.

Vitamin D deficiency increases the risk of inflammatory diseases and is associated with a higher risk of periodontal disease. You can maintain optimal levels through sensible sun exposure. If you can’t keep your serum levels between 40 ng/mL and 60 ng/mL you may consider supplementation.

Monitor your vitamin C status. One study from the University of Washington found that if your gums are bleeding, you may be deficient in vitamin C. They reviewed data from 15 trials in six countries and found when baseline levels of ascorbic acid (vitamin C) were less than 28 μmol/L, supplementation helped reduce gum bleeding. They concluded:

“Consistent evidence from controlled clinical trials indicates that setting human AA requirements based on scurvy prevention leads to AA plasma levels that may be too low to prevent an increased gingival bleeding tendency.
Gingival bleeding tendency and retinal hemorrhaging coincide with low AA plasma levels and thus may be reflective of a systemic microvascular pathology that is reversible with an increased daily AA intake.”

Stop using fluoridated products: It’s important to optimize your oral microbiome. Antibacterial and fluoridated products, such as toothpaste, mouthwash, floss, and fluoridated water, negatively affect your oral microbiome.
In the mouth, you don’t want to have a “scorched earth policy,” nuking all bacteria and hoping the good microbes come back, says biological dentist Dr. Gerry Curatola, founder of Rejuvenation Dentistry. Good microbes basically have a harder chance of setting up a healthy-balanced microbiome when you disturb them, denature them, or dehydrate them with alcohol- and chemical-based products.

Coconut oil is antibacterial and antiviral and contains 92 percent saturated fats, 49 percent of which is the anti-inflammatory and antimicrobial medium-chain saturated fat lauric acid. Scientific study has also suggested that oil pulling with coconut oil reduces plaque formation and reduces the risk of gingivitis.