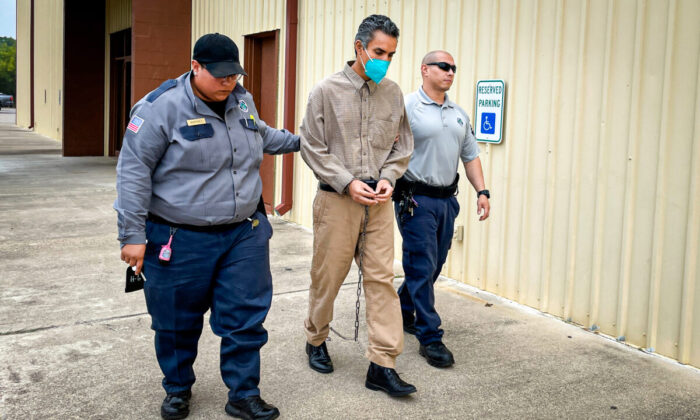 The defendant, Honduran native Lester Hidalgo Aguilar, was found guilty of criminal trespass on a local ranch and sentenced to the maximum jail time of one year. The judge declined to apply an accompanying fine, which could have been up to $4,000, but said Aguilar should pay court costs ($290).

Aguilar’s trial was a litmus test for the Operation Lone Star arrests, which began around July last year as Gov. Greg Abbott directed state troopers to arrest trespassers on state or private land.

Until now, almost all defendants have pleaded guilty or no contest to trespass or other misdemeanor charges, and have reached a plea deal of time served and no fine.

Aguilar’s trespass charge was enhanced to a Class B misdemeanor as he was found beyond 100 feet inside the property line of an agricultural operation, then elevated to a Class A as the crime occurred during a declared state disaster.

Most of the Operation Lone Star arrests have taken place in Kinney County, with ranchers and landowners increasingly finding cut fences, broken water troughs, and other property damage as scores of illegal immigrants have traversed their land to avoid law enforcement.

The Del Rio border sector, in which Kinney County sits, is consistently one of the highest regions for illegal immigrant “gotaways”—those who are detected by Border Patrol but evade capture.

In April, preliminary numbers from Customs and Border Protection revealed more than 16,000 gotaways in the Del Rio sector.

Those gotaways either coordinate with smugglers to drive them to San Antonio or Houston, or walk through private ranchland until they’re clear of the Border Patrol highway checkpoints, then arrange for transport.

Cheryl Gabler Tomlin, upon whose family ranch Aguilar was arrested, testified at the trial, saying the property is fully fenced and no one was authorized to enter the property, where she raises cattle and goats.

After the trial, she told The Epoch Times she was satisfied with the outcome. “I thought he would get off. I’m happy,” she said as she left the courtroom.

Tomlin said her life has changed considerably in the past year and a half as more illegal aliens encroach on her land. She recalled one of her scariest moments when she was opening a fence to let her horses out while still astride her ATV. A man appeared, and she said he whispered, “Don’t tell, don’t tell,” and leapt over the fence toward her ATV.

She hit the gas, and he struck the side of the ATV and fell down. She waved down Border Patrol agents who were down the road looking for him. The agents arrested the man and later told her he was a five-time aggravated assault felon from Honduras.

“I have a gun all the time now,” Tomlin said.

Kinney County’s population is around 3,100, and about half live in the county’s only significant town, Brackettville.

It’s a big ranching community, but with 16 miles of shared border with Mexico and large tracts of remote land, it attracts the illegal aliens who are trying to slip through unnoticed.

Jury selection took hours as the approximately 70 locals were whittled down to a six-person jury. Many prospective jurors said they had personal experience of the impact of the border crisis, and a large contingent were related to Border Patrol agents or local or state law enforcement officers.

Aside from Tomlin’s testimony, two Texas Department of Public Safety (DPS) troopers, who were present during Aguilar’s arrest, took the stand.

Sgt. Ryan Glenn, who supervises the tracking and arrest teams in the local area, said the priority for his teams is to protect local property owners.

“We met with local landowners and asked who should be here and who shouldn’t,” Glenn said. He said DPS uses surveillance cameras, drones, and communication with landowners and Border Patrol to help apprehend trespassers.

Defense lawyer Bryan Owens appealed to the jury for a not guilty verdict, saying the state didn’t meet the burden-of-proof threshold.

“Your verdict today won’t change anything about the border situation,” he said. “A guilty verdict is not going to deter even one person from trying to cross the border. This is about trespass.”

“You folks live in this community. I would say this is a good time to send a message … that the people of Kinney County do not tolerate people trespassing in our county,” Hackebeil said.

The jury took less than 20 minutes to find Aguilar guilty.

Aguilar chose to allow state District Judge Roland Andrade to sentence him, rather than the jury—which was subsequently allowed to go home—and Aguilar took the stand to appeal for a light sentence.

He said his parents brought him to Florida at age 6, where he later graduated from high school.

Aguilar admitted to a criminal history that includes a 1996 shoplifting charge in Omaha, Nebraska, buying cocaine in California in 2002, and conducting a home invasion in Florida in 1999.

After being jailed in California, Aguilar was extradited to Florida to face the earlier home invasion charge. Upon his release, he opted to voluntarily return to Honduras rather than take an extended probation period. He later moved to Mexico but said cartels were targeting him, so he crossed the U.S. border.

He said he hasn’t made any attempts throughout the years to enter the United States legally.

At its conclusion, Aguilar said he was happy with the trial.

“I’m still grateful. Everything’s OK. There’s tough feelings from the community,” he told The Epoch Times. With eight months served since his arrest on Sept. 13, 2021, he has four months to go.

Kinney County Attorney Brent Smith, who served as second chair to Hackebeil during the trial, said he’s pleased with the outcome of the trial.

“I’m very satisfied with what the jury concluded. I don’t see it providing much incentive for others to go to trial, when they see they can get one year of jail time,” Smith told The Epoch Times.