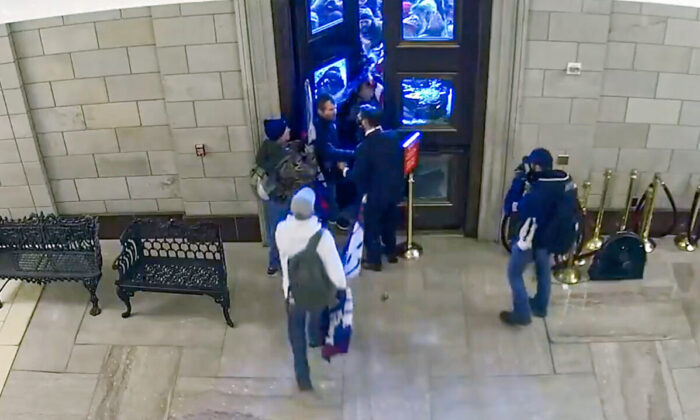 George Tenney III confronts an agent from the House Sergeant-at-Arms after opening the inner Rotunda doors on January 6, 2021. (DOJ/Screenshot via The Epoch Times)
Crime and Incidents

A South Carolina man who opened the inner Capitol Rotunda doors during the breach on Jan. 6, 2021, pleaded guilty in federal court on June 30 to two felony charges.

George Tenney III, 35, of Anderson, pleaded guilty in Washington to civil disorder and obstruction of an official proceeding.

Tenney faces up to five years in prison on the civil disorder charge and 20 years on the obstruction charge. He will be sentenced on Oct. 20.

Tenney played a pivotal role in allowing crowds into the Rotunda. He opened one of the magnetically locked inner doors after appearing to look to someone out of view of the security camera for instructions.

Federal prosecutors have charged a number of defendants, including members of the Oath Keepers, with “breaching” this entrance to the Capitol.

However, neither the huge bronze Columbus Doors on the outside, nor the magnetically secured inner doors can be opened from the outside.

Security video shows Tenney standing in the east foyer of the Rotunda and looking off-camera as if listening to someone.

Even though the inner doors can be opened in an emergency by holding the door handle down for three seconds, Tenney was able to open the left door as soon as he touched it, the video shows.

“A police officer who was outside tried to push [the doors] closed and Tenney resisted pushing against the door to try to keep it open,” the Department of Justice said in a news release.

“An employee of the House Sergeant-at-Arms then ran towards Tenney, pushing him aside in an effort to close the door.”

After assisting protesters coming through the door, “Tenney ultimately had to be pulled back inside so that the Rotunda Doors could be closed to keep other rioters from entering,” the DOJ said.

“He then retreated to the Rotunda and exited the Capitol through a window at approximately 2:32 p.m.”

Prosecutors said Tenney posted messages on Facebook in late December 2020 suggesting drastic action might be necessary at the Capitol due to fraud in the presidential election.

“It’s starting to look like we may siege the capital (sic) building and congress if the electoral votes don’t go right,” he posted on Dec. 28.

“There’s a bunch going around, figured we should talk about it … we are forming plans for every scenario. What you think?”

Tenney accessed the Capitol through the Senate wing doors at 2:19 p.m., prosecutors said.

A friend, Darrell Youngers, remarked at the time: “We are inside the Capitol Building. It has been overrun.

“… The Capitol Building has literally been broken into … this is what a revolution mother [expletive] looks like.”

Despite Tenney’s admission of guilt as part of a plea bargain, serious questions remain about the Columbus Doors and who opened them, allowing crowds to stream inside the Rotunda.

Video evidence from the east side of the Capitol shows the Columbus Doors were wide open as crowds first approached the steps leading to the Rotunda on Jan. 6.

Just before the police line on the steps was breached by protesters, video shows the bronze doors were closed, and they remained so as crowds gathered outside the entrance. It is not clear why they were opened again, and by whom.