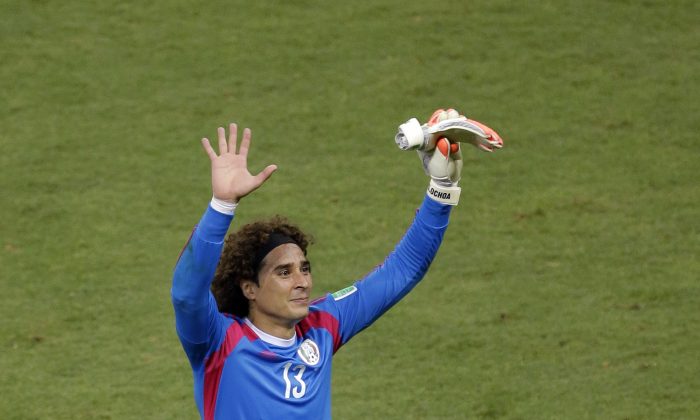 Ochoa, 28, was one of the better goalkeepers in a World Cup of outstanding goalkeeping at Brazil 2014.

However, the Mexican goalkeeper is out of job now, after his three-year contract with French Ligue 1 side Ajaccio ended earlier in the summer.

Ochoa was earlier linked with a move to Liverpool, Arsenal, and Malaga, but he insisted that he would take his time to decide where he will play his football next, and get back to the press later.

Christophe Monga, Ochoa’s agent, has said that Ochoa received offers from two unnamed French clubs, but he turned them down because “it was not the challenge [Ochoa] was expecting.”

Monga suggests that Ochoa prefers to stay in the French Ligue 1, and will move on if he doesn’t get a suitable contract.

Since then, Ochoa has yet to declare which club he is playing for, nor has there been much news or rumors about his possible designation until recently.

Abendzeitung Muenchen, a Munich tabloid, has suggested that Ochoa could be headed for Bayern Munich.

The tabloid noted that Bayern Munich coach Pep Guardiola had said recently that Munich needs “another goalkeeper as back-up to [Germany international] Manuel Neuer and second-choice keeper Tom Starke,” and that Ochoa is the man for the job.

If Ochoa did turn down offers because he felt that they lacked challenge, however, then Abendzeitung’s rumors should be taken with a pinch of salt.