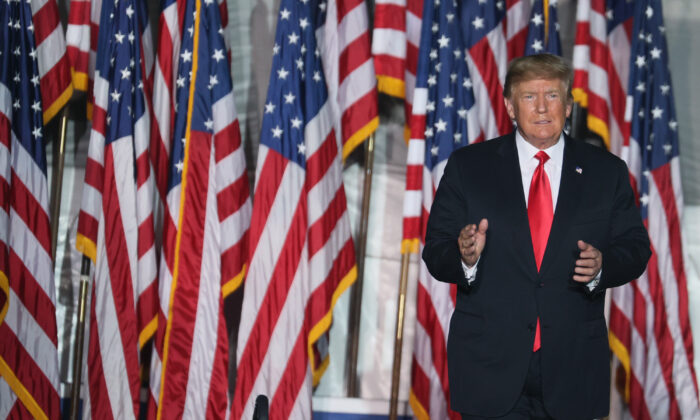 Guided by Trump Hatred, Opposition Must Now Answer for Its Improprieties

The year ends in Washington amid immense contumely. The Democrats continue monotonously on the one theme they have had these five years—Trump-hate, and they are now serving up that tired dish from a pre-confected misstatement of the former president’s views of the trespass and vandalism at the U.S. Capitol on Jan. 6.

It’s as odious and defamatory as their prolonged insistence upon a conspiracy between Trump and the Russian government to influence the 2016 presidential election. This endless presentation of Trump as a threat to democracy must be in its last lap. Even the former president’s more fervent admirers have often been appalled at his stylistic shortcomings, but not a whit of evidence has been adduced that his conduct has ever been illegal.

The real problem is that his opponents, in their desperation to be rid of him, so severe was his assault upon the complacent bipartisan and political establishment in Washington, that they have committed a sequence of grievous improprieties themselves.

And instead of enjoying the advantages of opposition, they must now try to justify their misconduct in elevating what is already clearly one of the very most dangerously incompetent administrations in American history, bearing comparison only with those of Franklin Pierce and James Buchanan that led directly to the Civil War.

What has really shaken American public life almost to its foundations is the sequence of five events: Donald Trump recognized when few others did the level of discontent in the traditional working and middle classes of white America and he mobilized the radical center of American opinion, which felt discriminated against in favor of a vast class of privileged yuppies and Clintonian and Obaman and parvenus.

Trump was attacking the liberal Republicans of the Bush-McCain-Romney wing of the post-Reagan Republicans as harshly as he was the Clinton and Obama Democrats. The near-unification of Democrats and traditional Republicans in opposition to Trump and his supporters assured not only a profound division in the country, but committed the hitherto complacent bipartisan political class to a no-holds-barred assault on Trump.

This was so vehement that it was almost certain to cross unacceptable legal barriers. Trump had changed parties seven times in 13 years, polling diligently and watching the ranks of those who would be susceptible to his populist appeal grow steadily. When he finally made his move, the consequences were bound to be very divisive.

His victory was so unexpected and his political methods were so uncompromisingly confrontational, it was widely believed by his astonished opponents—either genuinely or as a tactical pretense—that Trump was a lawless figure capable of almost any level of chicanery and that he only won the election by colluding with the Russian government to saturate key parts of America with partisan internet activity.

This was a complete fabrication, although it was legitimized by the corroborative opinions of the former directors of the CIA and national intelligence agencies and the antlike maneuvering of the director of the FBI and a number of his senior colleagues.

As soon as a silver stake was driven through the heart of this immense falsehood, the anti-Trump forces came snorting out of the undergrowth, claiming the telephone call in which Trump asked the president of Ukraine to find out what was the true story of the Biden family’s financial involvement in that country was an unconstitutional attempt to solicit foreign intervention in U.S. presidential election—almost exactly what they had just failed to prove in the mighty smear job sustained by 95 percent of the political media over the Trump-Russian collusion nonsense.

What followed was the sequence of four actions that placed almost unprecedented pressure on the ability of the American federal system to function effectively. Stirred to an extreme determination to repel the Trump offensive and reestablish their control of the federal government, the bipartisan political establishment collaborated, presumably more or less informally, in a series of steps designed to extirpate Trump and Trumpism.

The Democrats and their media allies seized at once on the political potential of the coronavirus. There was approximately one week of arm-in-arm trans-party solidarity when everyone was “in this together,” following which Trump was mercilessly accused of being “anti-science,” and insensitive to the suffering of the victims.

First, the Democrats, in the declared interest of making it easier for voters to exercise their franchise with the least possible concern about contracting the COVID virus while doing so, focused on six swing states: Arizona, Georgia, Michigan, Nevada, Pennsylvania, and Wisconsin, and effected extensions of voting times and the admission of ballot harvesting, in which ballots would be sent to everyone on the voters’ list regardless of likely obsolescence of the list, and could be cast with unverifiable accuracy by anyone who produced such a ballot signed by an ostensible voter.

In most cases, the alterations to voting and vote-counting methods in the states weren’t made by the state legislatures as the Constitution requires, but were decreed on the authority of Democratic governors, or adopted in settlements of lawsuits between the parties within the states. Having been adopted by a questionable method or not, the changes were upheld by state courts, generally reliable in partisan terms to sustain the initiatives of the party that appointed the majority of the judges.

Second, new rules were invoked, in some cases, observers were expelled, in others, the harvested ballots were simply mixed in with conventional ballots and it became impossible to judge the likelihood of any individual ballot to be genuine. All the measures necessary to flip the fewer than 50,000 votes necessary to win the election were taken to ensure that the Democratic candidate, Joe Biden, won at least Pennsylvania and two of the other swing states, assuring his election. (He won all six, and all but Michigan by a combined plurality of less than 153,000 out of about 20 million votes cast in those states. A flip of 46,000 between Arizona, Georgia, and Pennsylvania out of 15.3 million in those states, less than a third of 1 percent, would have given it to Trump.)

The desired result having been obtained, the third step was that the co-equal judicial branch of the U.S. government simply abdicated the responsibility of adjudicating the legality of these measures. As usual, Trump didn’t help himself by his hyperbole: He didn’t, as he claimed, win the popular vote, and having predicted the dangers of ballot harvesting, had inadequate forces on the ground to protect Republican votes, and no plausible legal team to attack the measures by which these drastic changes in the voting and vote-counting systems had been adopted.

None of the constitutional arguments was judged on its merits; all were rejected on process grounds. The Supreme Court of the United States, seized of a case from Texas and supported by 18 other states against the designated swing states for unconstitutional alterations of voting and vote-counting rules and failure to adhere to the constitutional requirement of fair elections, declared its legal incapacity to rule.

It was a shameful abdication, which was then compounded by an almost total media assertion that the Trump forces had no grounds to object to the outcome of the election. This, too, is shameful. With more than 40 million harvested ballots and such a close election, no one knows who won. The anti-Trump forces had their way but a majority of Americans doubt the legitimacy of the outcome of the election and a majority have a low opinion of all branches of government and of the media.

The only way for the Democrats to work their way out of this dangerous position was to have elected a successful administration. As the whole world can see, this administration’s failure in almost every field, the only way left to resolve the present divisions in the country is to evict the administration at the polls and replace it with legislators and an executive who will restore the integrity of the electoral process.

It will happen, but these next three years will be painful and embarrassing.