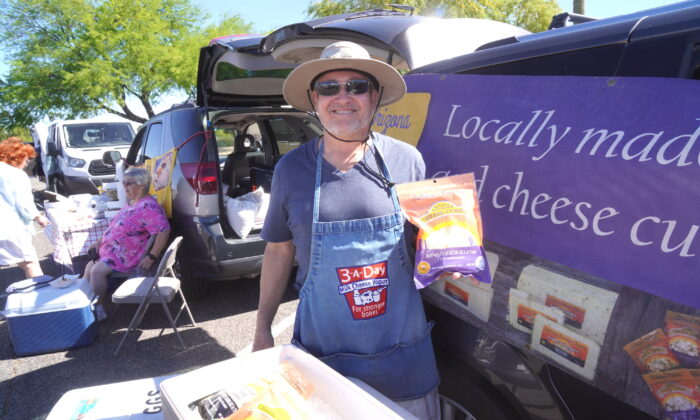 Tom Garrett, also known as The Cheese Guy, was one of many vendors selling locally sourced food and products at Sun City Farmers' Market in Sun City, Ariz., on April 7. (Allan Stein/The Epoch Times)
US

Growth of ‘Victory Gardens’ Providing for People Fed Up With Shortages

SUN CITY, Ariz.—Even in the midst of a worldwide food shortage, William Allen has his uncle’s delicious oranges and kumquats to fall back on.

He still has his small commercial farm—Mojo Tree Farm in Eloy, Arizona—and his indoor mushroom growing facility to carry him through times of scarcity.

This means he has nutritious, locally grown produce to offer his customers every week at Sun City Farmers Market in central Arizona. He’s been doing it for the past decade.

The key to his survival is adaptability.

The Sun City Farmers Market meets every Thursday at the Recreation Center of Sun City parking lot just outside of Phoenix.

Here, Allen and many other local growers are able to showcase and sell their products on tables under shade trees or canopies.

But only fresh non-GMO herbs, fresh-baked goods, fresh natural meats, and fresh seafood find their way to this market.

Like the soil he works in, he’s got everything he needs down pat.

“We’re not going to have any supply chain issues. We take care of the whole thing—like a closed system,” he said. “We know there are water issues coming up, so we do a grow center indoors. On our farm, we have water as well as irrigation. So we’re making workarounds, and working on hydroponics as well.”

It all comes down to sustainability, Allen said, and farmers moving to a more localized model.

Think small farm and garden—think close to home—and you’ll never be without food. This has been the mantra as green projects large and small continue to sprout in backyards and community spaces—even on city rooftops.

In New York City, Rauschenbusch Ministries operates the Hell’s Kitchen Farm Project, a nonprofit that has been thriving during the pandemic. The rooftop farm consists of 52 soil-filled plastic tubs set up on the 4,000-square-foot Metro Baptist Church rooftop in Hell’s Kitchen.

The project’s mission is to “create a more secure urban community through collaborative farming, education and community initiatives,” according to the project’s website.

“We strive to do this growing fresh food on a previously underutilized rooftop for distribution through a local food pantry, providing community nutritional education, and organizing a Community Supported Agriculture (CSA) program,” it states.

“Sometimes we’ll have beekeepers come up and check on the bees,” Agina told The Epoch Times.

In fact, urban community gardens in the United States have been growing before and since the pandemic, playing a key role in sustainable urban farming, according to the Trust for Public Land, a conservation organization.

The group found that in 2018, the number of garden city plots in city parks had increased 44 percent since the nonprofit started keeping track in 2012.

Today, there are more than 29,000 garden plots in city parks in the nation’s 100 largest cities. These small projects not only provide healthy, shared spaces for horticulture, they “offer simple solutions to a host of complex problems facing our cities.”

“The [plots] are always taken—year after year,” said Mary Maurer, the hospital’s community health resource center coordinator. “One gal has had her garden for 15 years.”

The community garden is part of the Vermont Garden Network. Maurer said each plot is maintained by the person at cost and typically measures 25-by-30 feet.

“This year is busier than last year. I have more calls coming in. The residents who’ve been around longer will do perennials. One gal only does potatoes. [Others] a lot of tomatoes, lettuces,” Maurer told The Epoch Times.

“I had one gardener last year who said if they had extra they’d donate their crops. They couldn’t eat them all.”

She said that in difficult economic times people are interested in growing their own food to offset their grocery bills. Also, many people don’t have access to their own garden space, so the hospital’s garden plots remain in high demand.

“A lot of people are supplementing their own food,” she said.

The hospital also has a 550-gallon water tank for garden irrigation and composting sites to make natural fertilizer.

“Everyone is trying to be organic and not use [chemical] fertilizer,” Maurer said. “Some people come before work. Their time in the garden is before it gets hot, or later when it’s cooler. So it’s sweet to see people incorporate [gardening] into their day.”

The success enjoyed by each gardener varies based on skill level and the amount of time and effort put into gardening, Maurer said.

“The ones who put the time and energy in it—they’re flourishing. Ninety-nine percent of people who want to garden, want to make it as successful as possible,” she said.

As small-scale agriculture continues to take center stage, cities and towns across the United States are looking to capitalize on their open space, whether it be a vacant lot or on the rooftop of an urban skyscraper.

Small Gardens: They All Add Up

Christian Kanlian, a food systems consultant at Agritecture in Brooklyn, said his job is to help clients plan urban farming solutions and maximize growing space. The company currently has more than 300 clients from 40 countries.

Kanlian said the company’s goal is to help build local and resilient food systems to meet the needs of a broad spectrum of consumers.

“There’s absolutely been an increase in our area. I think people are taking an interest in knowing where their food comes from,” he told The Epoch Times.

Kanlian said he only sees more interest in home and community gardens in light of their historical success in the United States.

During the Panic of 1883, for example, just 430 acres fed 975 families, according to the U.S. Department of Agriculture. Five million World War I “war gardens” produced 528 million pounds of food, while small gardens fed 23 million households during the Great Depression.

“I think the trend toward regional [farming] is only going to increase. I think it takes [global events] to change things. A lot of it will have to come from cities and local governments to incentivize production,” Kanlian said.

Allen said he uses ash and charcoal to make natural fertilizer, in addition to traditional composting.

It’s all part of his vision of creating a closed agricultural system free from the influence of farming conglomerates, “Bill Gates and the whole manipulated meat thing—people trying to mess with the fertilizer, mess with the foods, all this GMO stuff.”

“As time goes on, more people are realizing they don’t want [synthetic food]. If you asked me this question 20 years ago, you’d probably have one out of 100 [people] recognizing GMO food,” Allen said.

“‘Hey, how come my food tastes like plastic?’ People are starting to be more aware. I know the demographic that comes to the markets, they don’t like it. They’re specifically here because they don’t have interest in plastic meats.”