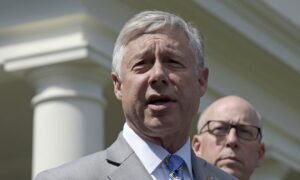 An increasing number of Republican senators are voicing opposition to holding an impeachment trial against former President Donald Trump, leaving Democrats’ ability to swing enough votes for a conviction in doubt.

Twenty-nine GOP senators have now spoken out against holding a trial, according to an Epoch Times tally, arguing it’s unconstitutional to try to convict a former office holder, or a waste of time.

“I think right now Donald Trump is no longer the president. He is a former president,” Sen. Mike Rounds (R-S.D.) said on NBC’s “Meet the Press” on Sunday, arguing parts of the Constitution say lawmakers can impeach a president but they do not indicate “that you can impeach someone who is not in office.”

“The first chance I get to vote to end this trial, I’ll do it,” Sen. Marco Rubio (R-Fla.) added on “Fox News Sunday.”

The pair and 27 other Republicans have said they don’t agree with holding a trial. The others include Sens. Ted Cruz (R-Texas), Tim Scott (R-S.C.), and Ron Johnson (R-Wis.).

“I believe an impeachment trial of a former president is unconstitutional and would set a very dangerous precedent. There is no provision in the Constitution for holding such a trial over a former president who is now a private citizen. Where would we get the authority to do so?” Johnson wrote in a statement last week.

Virtually all Democrats have said they’ll vote to convict Trump on the charge of incitement of insurrection. The House of Representatives impeached Trump because they said his words led to the Jan. 6 breach of the U.S. Capitol, including a speech he gave that day at The Ellipse.

A timeline showed that Trump had not finished speaking when the violence at the Capitol started. Trump has defended his speech, calling it “totally appropriate.”

Democrats must convince at least 17 Republican senators to vote with them to convict the former president. A conviction requires a supermajority. No president in U.S. history has been convicted. Three have been acquitted, including Trump.

Fifteen Republicans have expressed openness to voting to convict, or haven’t ruled it out. Chief among them is Senate Minority Leader Mitch McConnell (R-Ky.). Others include Sens. Mike Crapo (R-Idaho), Rob Portman (R-Ohio), and Susan Collins (R-Maine).

The stances of the six others aren’t clear. Five of their offices didn’t respond to requests for comment. A spokesperson for Sen. John Kennedy (R-La.) declined to comment.

Republican senators who are open to voting to convict or haven’t ruled it out:

Republican senators whose stances are unclear:

Editor’s Note: This article has been updated.