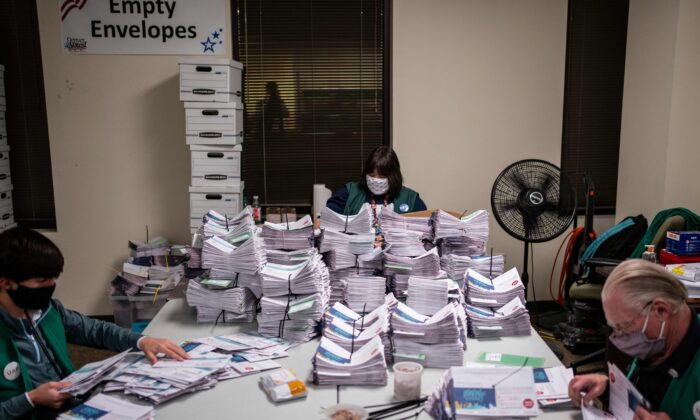 A good-government group is suing Colorado Secretary of State Jena Griswold in federal court for refusing to allow the inspection of voter list maintenance records as required by federal law.

Griswold says her agency’s contract with ERIC prohibits the release of the data that ERIC provides to member states. ERIC, a nonprofit that describes its mission as “assisting states to improve the accuracy of America’s voter rolls and increase access to voter registration for all eligible citizens,” was created in 2012 with assistance from The Pew Charitable Trusts, a left-wing philanthropy.

Griswold also claims Colorado can’t hand over the records because of the federal Driver’s Privacy Protection Act and other laws governing the Social Security death record database. Colorado’s membership agreement with ERIC, she claims, also prohibits member states from disclosing records that are public documents under the National Voter Registration Act (NVRA) of 1993.

Colorado, 30 states, and the District of Columbia outsource the maintenance of their voter rolls to ERIC. ERIC regularly provides the Colorado Secretary of State’s office with reports showing which registered voters are no longer eligible because they have died or relocated. The NVRA provides that all records used to add or remove voters are public records, yet Griswold denied a group’s request to inspect the reports ERIC provides to the state.

“Elections must be free and transparent for Americans to trust their results. Secretary Griswold and ERIC are blocking transparency and violating federal law,” said Adams, a former U.S. Justice Department civil rights attorney.

The lawsuit, PILF v. Griswold, was filed on Dec. 16 with the U.S. District Court for the District of Colorado. Griswold is being sued in her official capacity.

On Aug. 20, PILF notified Griswold that she was in violation of the NVRA for failure to permit inspection of voter list maintenance records as required by 52 U.S.C. Section 20507(i), according to the 14-page legal complaint filed with the court.

On Nov. 18, Griswold notified PILF that she wouldn’t be complying with the group’s requests, the complaint states.

PILF said in the complaint that it “utilizes the NVRA’s Public Disclosure Provision and state and federal open records laws that require government records be made available to the public. Using records and data compiled through these open records laws, the Foundation analyzes the programs and activities of state and local election officials in order to determine whether lawful efforts are being made to keep voter rolls current and accurate in accordance with federal and state law, and to determine whether eligible registrants have been improperly removed from voter rolls. The Foundation also uses records and data to produce and disseminate reports, articles, blog and social media posts, and newsletters in order to advance the public education aspect of its organizational mission.”

Griswold and the Electronic Registration Information Center didn’t respond to a request for comment by press time.