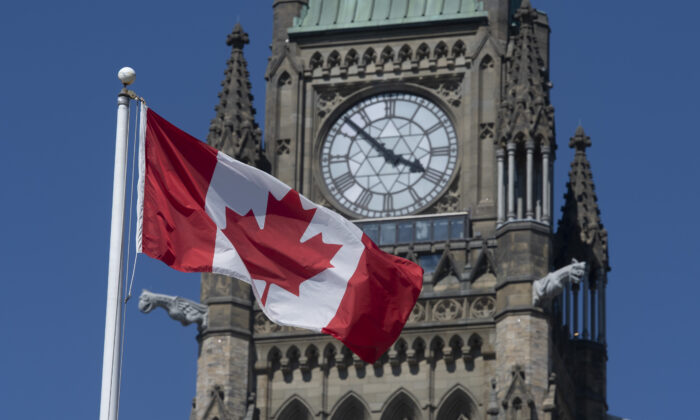 The Canadian flag flies near the Peace tower on Parliament Hill in Ottawa on June 17, 2020. (The Canadian Press/Adrian Wyld)
Canada

‘Canada’s Pandemic Is Effectively Over,’ Says Group of Doctors, Scientists

A group of leading scientists, doctors, and policy professionals has declared Canada’s COVID-19 pandemic officially over as of Feb. 16.

Known as “The Canada Science & Policy Committee to Exit the Pandemic,” the group, launched in January under the aegis of think tank The Institute for 21st Century Questions (21CQ), issued a press release on Feb. 16, declaring an end to Canada’s pandemic.

“The Exit Committee has now met numerous times and consulted extensively across the country and internationally. Today, it declares that Canada’s pandemic is effectively over—that is, it has reached endemic stage and should be treated as such,” the release said.

The committee of 15 members said they have devised a national exit plan that covers the entire country across “eight national systems in crisis” including COVID-19 public health, non-COVID public health, business and the economy, education, institutions, national unity, social fabric, and international.

The exit plan will be released during a national press conference on Feb. 18, the members added.

At Friday's nat'l press conference, the Committee will release its nat'l exit plan across the 8 nat'l systems in crisis. @kwadwo777 pic.twitter.com/Ne2pR0xwUe

During the launch of the Exit Committee on Jan. 20, Irvin Studin, committee member and president of 21CQ, said a pandemic exit framework with practical strategies for Canada is long overdue.

“This is not for fun. This is not for narcissism. This is not a science project or research project,” said Studin at a press conference. “It is a project to exit the country from its worst public catastrophe since Confederation.”

He said the committee was formed in order to bring Canada’s medical, scientific, and policy communities together to avoid working in silos and speed up a systematic plan to exit from the pandemic.

Studin added that the committee seeks to offer practical advice to governments so that decision-makers can tackle the COVID crisis from a broader perspective rather than continuing to make “huge mistakes” in “disrupting” the rhythm of Canadian society through their pandemic policies.

“We aim to exit in the coming months. We will be briefing all governments and all scientific professionals across the country actively.”

Studin, who is the co-chair of the Exit Committee, stressed that their approach will be policy-led, which he said should be the priority.

“We have a policy lead, not a science lead. The science is in support of the policy because, after all, this is not a ‘follow the science’ project. It is a policy project to exit the pandemic informed by science,” he said.

“Science is one of multiple inputs and that is the appropriate way to understand the exit.”

In recent weeks, several provinces have announced plans to lift their vaccine passport mandates and other pandemic measures.

Studin said removing restrictions is not enough for Canada as the country needs a “deliberate choreography to reinstate elegant living” that takes into consideration the eight systems in crisis the committee has stated.

“What’s happened over the last two years is that the country has, across the [systems in crisis] I have articulated—from public health to education to the economic sector—found itself collapsed to a lower level of equilibrium,” he said.

“If we imagine that this status quo persists, we will live miserably indeed, and the country could disintegrate very fast.”

He said what Canada needs is a “burst of energy” to “resuscitate” the systems.

“We will be providing some of that energy and some of that thinking and the courage for decision-makers to say ‘we’re back, we’re out, we move on,’” he said.