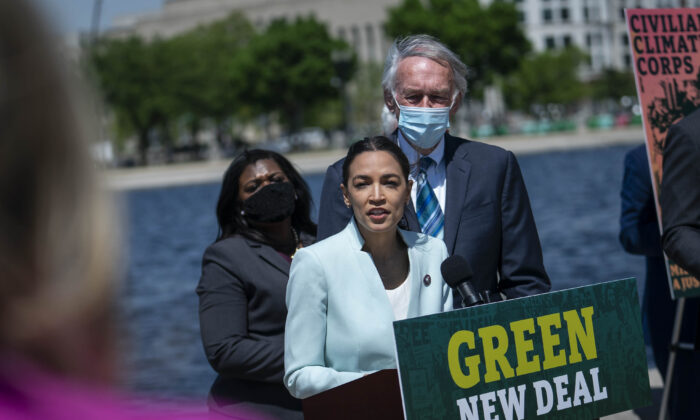 Progressive Democrats reintroduced their signature climate change-fighting blueprint, this time in the form of a Senate resolution, with Sen. Ed Markey (D-Mass.) proclaiming in Washington on April 20 that “the Green New Deal isn’t just a resolution, it is a revolution,” while Republicans denounced it as a “socialist super-package.”

First introduced in 2019 in the form of a non-binding House resolution (pdf), the essentially identical Senate version (pdf) of the Green New Deal seeks to eliminate U.S. greenhouse gas emissions within a decade, transition the economy away from fossil fuels, weave climate change imperatives into any infrastructure bill considered by Congress, along with a medley of progressive social justice priorities in areas such as race relations and income disparities.

“The green new disaster is back,” Sen. John Barrasso (R-Wyo.), ranking member of the Senate Committee on Energy and Natural Resources, said in a statement. “Free market innovation is the best way to protect our air, water, and communities—not heavy-handed government regulation or taxation.”

While touting the Green New Deal as a “revolution,” Markey said the proposal “provides the framework we need to confront the intersecting crises our country faces—climate change, a public health pandemic, racial injustice, and economic inequality.”

“We can transform our economy and our democracy for all Americans by addressing the generational challenge of climate change,” he added.

“We’re going to transition to a 100 percent carbon free-economy, that is more unionized, more just, more dignified, and guarantees more health care and housing than we ever have before,” Ocasio-Cortez said at the press conference. “Do we intend on sending a message to the Biden administration that we need to go bigger and bolder? The answer is absolutely yes.”

Since it was unveiled two years ago, the Green New Deal has become a lightning rod of criticism from conservatives and industry experts. Some critics have called it part of a socialistic effort to push the economy off its free-market foundations and, in the words of Marc Morano, author of the book “Green Fraud: Why the Green New Deal is Even Worse Than You Think,” it’s imbued with the overarching aim of controlling “every aspect of your life.”

Republicans were quick to push back following the relaunch of the green blueprint.

“The Green New Deal is a socialist super-package which will only saddle hard-working taxpayers with debt and displace millions of Americans from their jobs,” Rep. James Comer (R-Ky.), the ranking Republican member of the House Oversight Committee, said in a statement. “Democrats will stop at nothing to push their progressive pet projects on the American people.”

“True to its name, the Green New Deal is the most amateurish resolution in recent memory,” Environment Subcommittee ranking Republican Ralph Norman (R-S.C.) said in a statement. “This legislation would change every aspect of American life—what we eat, how we travel, how we stay warm, and even what jobs we can take. This is no way to govern. Simply put—The Green New Deal is an attempt to disguise socialism in the name of environmental protections.”

It wasn’t immediately clear whether the plan would receive a significantly warmer reception from President Joe Biden’s administration than it did from the administration of former President Donald Trump, who, in 2019, had denounced the Green New Deal.

“It’ll kill millions of jobs. It’ll crush the dreams of the poorest Americans and disproportionately harm minority communities. I will not stand for it,” Trump said at the time. “We will defend the environment, but we will also defend American sovereignty, American prosperity, and we will defend American jobs.”

Biden, while campaigning for president, sought to distance himself from the Green New Deal, saying that he had his own “Biden plan” that was different from what he called “the radical Green New Deal.” Still, the Biden Plan for a Clean Energy Revolution and Environmental Justice references the controversial legislative proposal as its underpinnings.

The president, who is hosting an online climate summit this week and announced in January that the United States would rejoin the 2015 Paris Agreement to fight climate change, has promised to put the country on track to net-zero emissions by 2050—a much later deadline than set out in the Green New Deal.

Markey confirmed to reporters at the press event that he wants to go further than Biden’s plan.

“Yes. We believe that this is the moment that requires us to act big, think big, have a program that matches the magnitude of the problem that we’re confronted with,” Markey said.

Besides being denounced by Republicans, the Green New Deal is likely to face opposition from moderate Democrats, such as Sen. Joe Manchin (D-W.Va.), who voted against the measure in 2019 and reportedly said on April 20 that the Green New Deal is “not practical,” it “doesn’t work really if you’re talking about global climate,” and “you can’t eliminate your way to a cleaner environment, you have to innovate your way.”

The Green New Deal calls for 100 percent of power demand to be met from zero-emission energy sources such as wind and solar, modernizing transportation infrastructure, cutting carbon emissions from the manufacturing and agricultural sectors, as well as making buildings and homes more energy-efficient. It also aims to create an economic safety net for communities affected by climate change and the shift away from fossil fuel use, including through guarantees of health care, jobs, and job training.

Morano, in an interview with The Epoch Times’ “Crossroads” program, argued against a heavy-handed regulatory approach to combat climate change, warning that if progressives “get their way,” there would be “climate lockdowns” of the kind that have been seen under the COVID-19 pandemic.