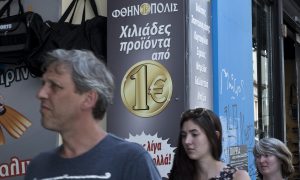 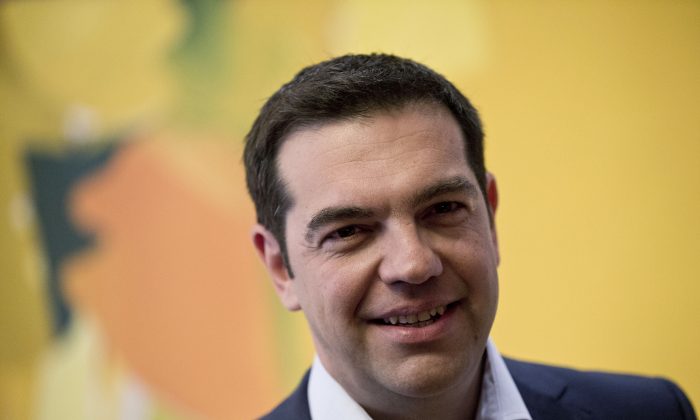 Greek Prime Minister Alexis Tsipras waits the arrival of Stavros Theodorakis, leader of the political party To Potami (The River) prior their meeting at his office in central Athens Tuesday, June 16, 2015. Greece insisted Monday it is ready to return to bailout talks "at any moment" after a breakdown in negotiations with creditors pushed the country closer toward bankruptcy and jolted international markets. (AP/Petros Giannakouris)
Europe

Speaking in parliament, Tsipras turned on bailout lenders from the eurozone and the International Monetary Fund, accusing them of insisting on imposing a “failed program.”

The latest cuts demanded by lenders, Tsipras said, concerned pensioners, who have already been “brought to their knees”

“It appears this is a show of strength aimed at killing any effort to counter austerity … It’s an issue that does not only concern Greece but all the peoples of Europe,” he said.

The continued uncertainty caused a second day of heavy losses on the Athens Stock Exchange, whose main index was down more than 4 percent. Germany’s DAX was as much as 1 percent lower, amid wider European losses.

Elected on an anti-austerity platform in January, Tsipras is having trouble convincing skeptics in his coalition government to back a compromise deal with creditors that would likely see an extension of bailout taxes that he had repeatedly promised to abolish.

Dissenters within the main Syriza party — some openly seeking a break with lenders and return to national currency — have organized anti-austerity rallies in Athens Wednesday.

“I see my task in that, and I have said time and again that I would like to do everything that is possible to keep Greece in the eurozone,” she said.

“And I am applying myself to this task.”

“‘The time is certainly getting very, very short,” said Jeroen Dijsselbloem, the Dutchman who acts as the eurozone’s top finance official. “Since the talks were suspended on Sunday, I don’t think there has been a lot of development.”

Tsipras on Tuesday met with the leaders of two opposition parties who offered his government help in the bailout negotiations.

The parties — the centrist Potami and Socialist Pasok — have a combined bloc of 30 seats in parliament.

Mujtaba Rahman, of the New York-based risk consultancy Eurasia Group, said tension between Greece and lenders could help Tsipras sell a compromise to his party.

“We continue to believe pressure on Tsipras from within Syriza will dissipate if he is seen to bring home the best possible political deal,” the group’s Mujtaba Rahman said.

“But time is close and the risk of worst case scenarios is certainly increasing.”