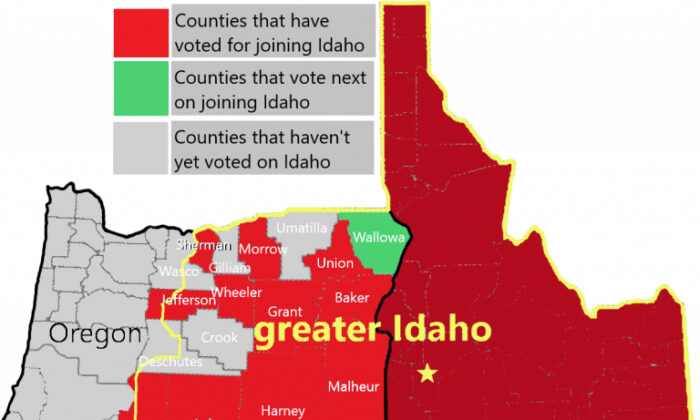 What Idaho's proposed border relocation would look like if more counties from eastern Oregon and California joined. (Courtesy of greateridaho.org)
By Allan Stein

Two more conservative-leaning counties in eastern Oregon, and one politically split county in California, have voted to begin the process that could lead to secession from their respective blue states.

On Nov. 8, Oregon’s Morrow County passed the Greater Idaho proposal with 61 percent of the vote and Wheeler County with 59 percent.

A similar measure in San Bernardino County, California, passed by a narrow margin, 51.3 percent to 48.7.

“These are solutions they want their elected leaders to look into,” said Matt McCaw, spokesman for the Greater Idaho Movement based in Oregon.

“We think it makes sense to move the border to where the cultural divide [exists]. Oregon is a very polarized state—two very different cultures.”

The Greater Idaho Movement seeks as many as 15 counties in Republican-majority rural eastern Oregon to join with neighboring Idaho to the east.

So far, 11 counties have signed on since the movement launched in 2019. Another county will vote on whether to investigate the secession process early in 2023.

If both states ultimately agree to separation, the next step would be to form an interstate compact between Idaho and Oregon, something McCaw believes has “plenty of popular support.”

The benefits would be mutual, he said.

For example, though Oregon would end up losing about 400,000 (9 percent) of its population and ceding 63 percent of its land mass to Idaho, a political merger would end the longstanding partisan divide in Oregon, where Democrats comprise 47 percent of the electorate.

The situation is nearly the reverse in Idaho, with nearly 84,000 square miles, 2 million residents, and a gross domestic product that exceeds $79 billion. Moreover, nearly 57.7 percent of the state leans conservative and Republican.

Oregon, by contrast, encompasses more than 98,000 square miles and has 4 million residents and a gross domestic product of $224 billion. Vast swathes of some 30 million acres of productive forestland lie in the eastern part of the state.

McCaw said most of Oregon’s wealth comes from industry and finance in the western coastal area, where liberal politicians in the state’s largest city of Portland often decide the state’s policies.

McCaw said that political and cultural polarization is a problem not only in Oregon but across the United States. He said there is a “huge urban [and] rural divide” that is “only getting bigger.”

He said that disapproval with the 2022 midterm elections among conservatives would only fuel partisan realignments at the state and county levels.

“We’re about matching government to people and their values. You get rid of polarization and tension by matching people to the government they want,” McCaw told The Epoch Times.

In San Bernardino County, with more than 2 million residents, real estate developer Jeff Burum proposed Measure EE as a way to leave California and create the new state of Empire.

At issue is the state’s apparent inability to supply the resources or funding to support a growing population.

The measure asked voters their “opinion on whether they want San Bernardino County elected representatives to study and advocate for all options to obtain the county’s fair share of state funding, including secession from the state of California.”

Burum told The San Bernardino Sun, “I would never wilfully want to leave this state. But I can tell you this, if you’re just going to continue to abuse me and abuse us, sometimes you don’t have a choice but to stand up for yourself.”

Jack Pitney, a professor of American politics at Claremont McKenna College in Claremont, California, told the Daily Press there is a “very low probability” Measure EE would succeed, given that there are constitutional hurdles to overcome.

He said the Constitution requires a vote of the state legislature to allow secession and the U.S. Congress to approve the establishment of a new state.

West Virginia was the last state to secede at the height of the Civil War in 1863. Until 1792, Kentucky was a part of Virginia, and Maine a part of Massachusetts before separating to become an independent state in 1820.

Another example is Washington, once a part of the Oregon Territory before it split from Oregon and became a territory in 1853 and the 42nd state in 1889.

In Idaho, Republican state Rep. Barbara Ehardt said she supports the Greater Idaho movement as a “win-win” for both states even though it’s far from being a done deal.

“States rights—that’s why I favor this movement. At some point, states will have to get the courage and rise and say, you know what? We’re not playing in that sandbox because it’s corrupt. We’re going to do what we need to,” she said.

“When I first heard about this [movement] it resonated. Why wouldn’t we want to explore this, given that Idaho has been the No. 1 state in the nation for percentage of growth? If this weren’t a win for Idaho, I wouldn’t be behind it,” Ehardt told The Epoch Times.

Ehardt said the more liberal-leaning parts of Oregon would benefit from fewer political struggles with conservatives and tax subsidies of the state”s less affluent eastern half. There would be “zero exchange” of congressional seats, and a more unified culture.

The gains for Idaho would come from natural resources—minerals, water, timber, and the acquisition of Coos Bay, an important commercial hub.

As one of the nation’s fastest-growing areas for conservatives, Idaho’s right-leaning base would gain from the infusion of 400,000 new residents, many of whom would likely vote Republican, Ehardt said.

“There’s opposition among Democrats in Idaho, as one would expect,” Ehardt said.

Among conservatives, however, “they’re thinking politically to preserve a way of life because of insane policies that will destroy their way of life.”

Several Democratic state lawmakers in Oregon did not respond to The Epoch Times’ request for comment on the idea of county secession.

At this stage, Ehardt views Greater Idaho as something of a “long shot,” but not impossible to achieve.

“We’d probably need a little divine intervention. I don’t mind saying that. Because I believe in that.”

McCaw said the issue is “less about red versus blue state but whether this makes sense. The answer is ‘yes’.”

Some states, such as Texas, have taken matters a step further, demanding secession from the United States to become a separate country.

In June, the Texas Republican Party endorsed a referendum on the state seceding from the United States and forming an independent republic.

“Eastern Oregon is not that way. It wants a right-leaning government. Let states make those decisions. Let border decisions make sense when [borders] are drawn.”

In the meantime, McCaw feels Greater Idaho has gained enough support and momentum to bring the measure to a referendum vote in both states, possibly in 2024. He said in poll after poll, conservative residents in both states—even many Democrats—feel that divorce “makes sense” in the current political environment.

“We feel like we’ve proved at this point that eastern Oregon wants this as a solution,” McCaw said. “We believe we can make this happen.”

UPDATE: This article has been updated with a new map.