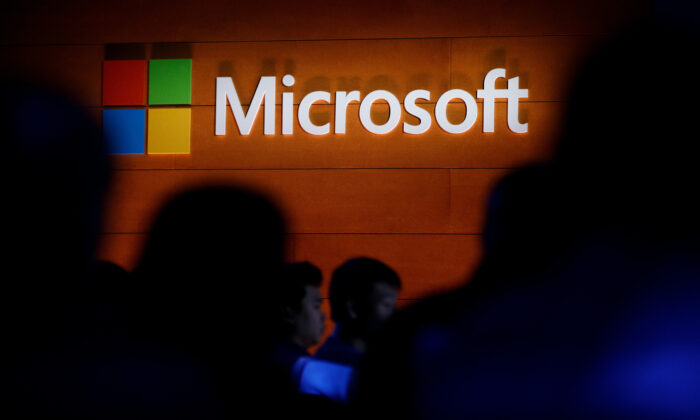 The Microsoft logo is illuminated on a wall during a Microsoft launch event in New York City on May 2, 2017. (Drew Angerer/Getty Images)
Viewpoints

It’s been a while, but the Marvelettes should consider coming back to rerecord their 1961 hit “Please Mr. Postman,” not to mention the MissBehave Girl Band who did a cover in 2019 and the Fab Four themselves, who did their own version back in the day. (Rerecording might be difficult for them.)

The lyrics—“Mister postman look and see / Is there a letter in your bag for me”—are not sufficiently “woke” (i.e., “inclusive”), according to Microsoft.

The corporation has introduced a (voluntary, for now) on-screen editor in their almost universally used Office software to guide us away from what they deem “non-inclusive” language to proper “wokespeak.”

Hence, no more sexist “postman.” Better, they would suggest, is “postal carrier,” as in “Mister postal carrier look and see …” Or how about the also-approved “postal worker” to give us the Soviet-tinged “Mister postal worker look and see.” Both are, unfortunately, a tad high on the syllable count, but musicality or anything approaching aesthetics have little to do with this.

Other words judged “inappropriate” by Microsoft with a preferred substitute offered are fairly obvious in this age of social justice imbecility: “Master” is out because it’s evidently associated with slavery, not locks. “Expert” is suggested instead. (I guess no more masterpieces. Shakespeare and Beethoven were “experts,” although we might have to revise that after running “King Lear” through Office.) “Dance performer” instead of “show girl” and, to underscore the new androgyny, instead of “heroine,” “hero.” It goes on.

Imagine, Microsoft, the company founded by Jeffrey Epstein’s great friend Bill Gates, is telling us how to behave through language alteration. (Does anyone have a synonym for hypocrisy meaning “so hypocritical it’s actually nauseating.” We need a new word here.)

Soon enough, they’ll be asking us to insert our pronouns in order to log in.

On the surface the whole thing is hilariously stupid, but this is no joke. Woke, and all it entails, is far from funny. Even the reliably liberal Bill Maher has recognized that, reminding his ideological compatriots that a lot of the public is fed up with this nonsense.

But that doesn’t deter Microsoft that continues to pay obeisance to what’s in reality manipulative propaganda designed to control us and guilt us into being sheep, a nation of conformists. (Conformism is the hallmark of the modern American left, in my estimation.)

That Big Tech should be deeply involved in this is no surprise. In a sense, who else? They are the new totalitarians, far outstripping the old totalitarians that were mere nation states.

And control of the language, Orwell showed us on multiple occasions, is the root of the matter. “Sticks and stones may break my bones but words will never hurt me” is one of the great lies we are told as children. You can often recover from physical injury and be perfectly fine. Emotional wounds created by words scar us our entire lives, skew our ability to see reality, and often have immense ramifications on our behavior going forward.

Microsoft and the others (Facebook, Google, and so forth) know this as well as anyone. That’s why they are endeavoring to control the language. Embarrassed, Microsoft might withdraw this particular initiative, but it has shown us their true intention.

Other attempts will follow by them and/or their colleagues. Google’s control of search algorithms is arguably also a form of the control of language.

This is all an important part of what we call the Great Reset. In fact, it’s the essence of it. Control words. Control ideology. Control the world. (And, of course, control the money, whether in blockchain or cash.)

Everyone becomes a globalist. Democracy is gone, constitutional republics too. They’re too cumbersome, too 18th century in a high-tech world.

Microsoft’s stealthy attempt to control our language, buried deep in their menu system as it is, is no small thing. It’s a more dangerous and enduring virus than COVID. We better stop it before it stops us.