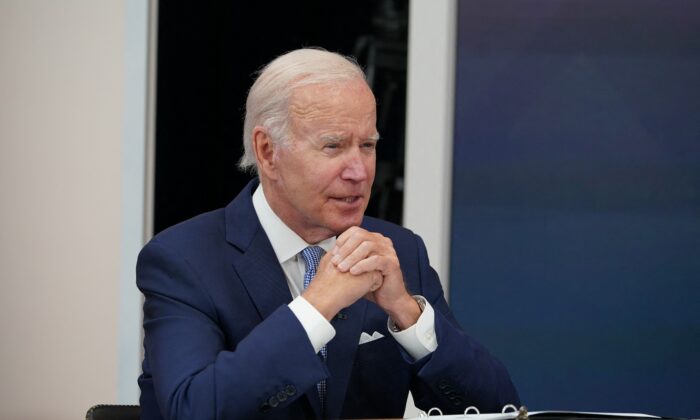 President Joe Biden during a meeting in the South Court Auditorium of the Eisenhower Executive Office Building, next to the White House, in Washington, on July 28, 2022. (Mandel Ngan/AFP via Getty Images)
By Zachary Stieber

Two doctors and a former Harvard Medical School professor have signed onto the lawsuit that alleges the U.S. government and Big Tech colluded to censor dissenting voices.

Dr. Jay Bhattacharya and Martin Kulldorff, who authored the Great Barrington Declaration, on Aug. 2 joined the states of Missouri and Louisiana in the case, which is moving forward with discovery after a recent ruling.

Dr. Aaron Kheriaty, who was fired for refusing to get a COVID-19 vaccine, also joined the legal action.

All three say they have been affected by Big Tech censorship, and believe the punitive measures have been influenced or directed by government officials.

In April 2021, for instance, Google-owned YouTube deleted a video of Bhattacharya and Kulldorff questioning whether masks were effective in stopping the spread of SARS-CoV-2, which causes COVID-19.

Kulldorff, a former Harvard Medical School professor who now works at the Brownstone Institute, was also suspended by Twitter for several weeks after positing that masks give people a false sense of security, which makes them more likely to expose themselves to the illness. That’s the same theory put forth by top U.S. officials until they pivoted to endorsing widespread mask-wearing months after the pandemic started.

“I have always shared peer-reviewed research findings as well as my own opinions and perspectives on Twitter and LinkedIn. It was not until I began posting information about COVID and our COVID response policies, however, that I encountered censorship on the Twitter platform,” he wrote in a declaration filed in the new case.

Multiple platforms, meanwhile, took action against the declaration, which called for focused protection of the elderly while letting the rest of society live their lives normally and was vociferously opposed by top U.S. health officials, including then-National Institutes of Health Director Francis Collins.

Search results on Google initially placed the declaration’s website near the top but soon ranked it lower than articles that were critical of the document, according to declarations from Bhattacharya and Kulldorff. Reddit removed links to the declaration and Facebook removed a page dedicated to the document, though it later restored it.

The scientists say they’ve had to “self-censor” in order to try to remain on the platforms.

That has sometimes meant not posting at all, and other times posting by using “imaginative phrasing,” Kulldorff said.

They also say the timing of the censorship decisions support the assertion that the moves were induced by the government, including how censorship of the declaration happened soon after Collins called for a “quick and devastating … take-down” of the document in private and disparaged it in public.

“These are clear indications to me that government is in collaboration with Big Tech to suppress scientific dissent,” Bhattacharya told The Epoch Times.

Government officials such as former White House press secretary Jen Psaki have openly admitted to flagging “problematic posts” for Facebook and raising issues with posts on Twitter, the complaint notes, while some of the platforms have acknowledged consulting with government officials on content moderation.

“The government’s sweeping campaign to suppress the perspectives of the plaintiffs, and others like them, represents the most severe abrogation of the First Amendment in modern times, and we look forward to seeing this constitutional atrocity rectified in a court of law,” Jenin Younes, a lawyer for the New Civil Liberties Alliance, which is representing the new plaintiffs, said in a statement.

The plaintiffs were added in an amended complaint, filed in response to the government’s motion to dismiss.

The revised effort drops one defendant, Psaki, who is no longer with the federal government, and adds a number of others.

Carol Crawford with the U.S. Centers for Disease Control and Prevention (CDC); the U.S. Census Bureau; Jennifer Shopkorn, a senior adviser for the bureau; the Department of Commerce; Robert Silvers and Samantha Vinograd, Department of Homeland Security officials; the Cybersecurity and Infrastructure Security Agency; Jen Easterly, director of the agency; and Gina McCarthy, a White House national climate adviser were named as defendants.

None were named in the original filing.

President Joe Biden, Dr. Anthony Fauci, and Homeland Security Secretary Alejandro Mayorkas were among the defendants named in both complaints.

The additions came after new information came to light, including emails between the CDC and top executives at Big Tech companies like Twitter.

The messages show Crawford and colleagues met with and discussed taking action against alleged COVID-19 misinformation.

The Census Bureau was involved in the coordination, according to the missives.

The messages, the amended filing states, “confirm the allegations of collusion between [government] officials and social-media platforms to censor disfavored speech, speakers, and viewpoints, as alleged herein.”