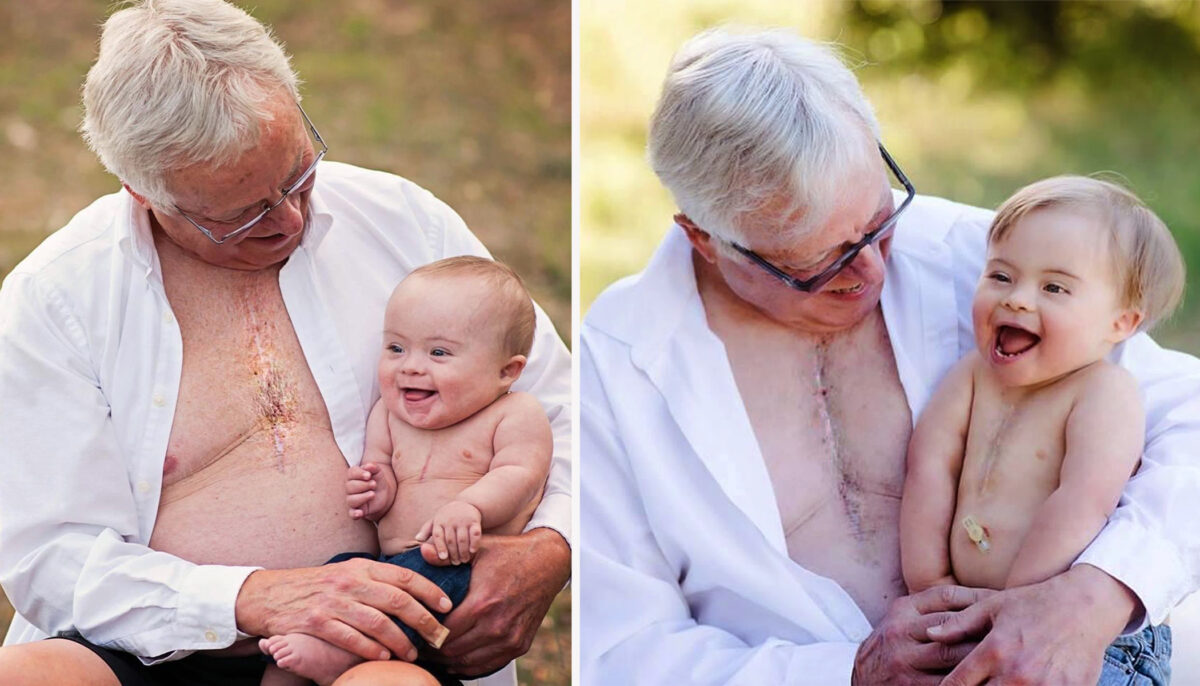 A grandfather and his grandson from Santa Rosa in North California not only share an inseparable bond but also matching scars from heart surgeries they had on the very same day, eight years apart.

After grandad Jim Simpson and grandson James O’Leary’s special bond was captured in a series of touching photos, James’s mom and Jim’s daughter, Larkin O’Leary, is sharing their “heartiversary” story with the world to inspire hope in others.

Baby James was born on March 17, 2014, and was his parents’ “St. Patrick’s Day miracle.” James was suspected to have Down syndrome at birth, a diagnosis that was overshadowed, for Larkin, by news of a critical heart defect.

“He had only let out one cry and then stopped, so they rushed him to the NICU and my husband followed behind,” she recalled. The first time the new mom saw her son was on an iPhone screen.

It was discovered later that James had a heart issue and needed an immediate transfer to San Francisco. The couple were able to take their “baby with a broken heart” home eight days later.

James then needed to gain weight for open-heart surgery at the age of 6 months as he had an AV canal defect. However, he struggled, going in for surgery at two-and-a-half months prematurely. “In recovery, we almost lost him,” said Larkin.

James has since had an additional 28 surgeries and has spent hundreds of days in the hospital, but you would never know it, says his mother, from the smile on his face.

Larkin’s father, Jim, meanwhile, was having an ablation for atrial fibrillation in 2008. A complication mid-procedure meant that Jim ended up needing emergency open-heart surgery, but the then-63-year-old pulled through.

The “heartiversary” photoshoot was Larkin’s idea; photos were shot by photographer Lindsey Tatum, who first met James when he was just weeks old. “It has been an honor to capture these special times in his life,” Lindsey told Good Morning America.

Jim and James’s love for one another, said the photographer, is “palpable.”

For Larkin, the photos represent survival and strength. “[T]hey capture the beginning of the rollercoaster of a life we now have,” she said. “Both my son and dad have taught me just how precious life truly is.”

For Jim, the photos are heartwarming. “I love looking at ones we have on walls and shelves,” he mused, Larkin told The Epoch Times. “They mean so much to me; the beautiful bond we have.”

Larkin hopes that Jim and James’s “heartiversary” story will help others, quoting Brene Brown: “One day you will tell your story of how you overcame what you went through, and it will be someone else’s survival guide.”

To support and advocate for other children and families with disabilities, Larkin also started a nonprofit: Common Ground Society.

“When we were in the midst of a 40-day hospital stay, I lost it. I lost hope,” Larkin recalled. “I found a few moms who were experiencing the same things we were. … They listened without judgment.”

Common Ground Society’s mission, said Larkin, is to challenge the world to be inclusive and kind. The society has held presentations to almost 16,000 students, and hundreds of college and community members, to date; Larkin says they are “just getting started.”

Today, Jim and James’s bond is stronger than ever. James is fast growing up, and he along with his sister are the lights of the O’Learys’ lives.

“We are grateful every day for them,” said Larkin, adding that her greatest wish is to assure others that hope exists. “[E]ven if it’s a dimly-lit light at the end of a very long tunnel,” she said. “It’s there.”