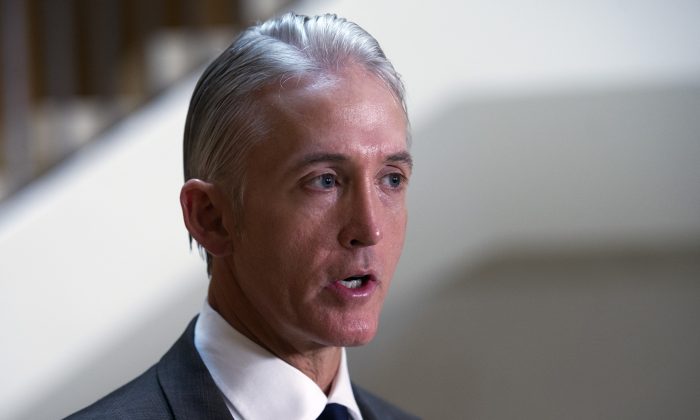 WASHINGTON — The chairman of the panel investigating the deadly 2012 Benghazi attacks said Sunday that new information reveals a “total disconnect” between the security needs of U.S. personnel on the ground and the political priorities of Hillary Rodham Clinton’s State Department staff in Washington.

Rep. Trey Gowdy, R-S.C., described emails from Ambassador Chris Stevens to the State Department requesting more security almost from the moment he arrived in Libya. The request virtually crossed paths with one Clinton’s staff sent to Stevens, asking the new ambassador to read and respond to an email from a Clinton confidant, according to Gowdy. At another point, Clinton aide Victoria Nuland asked Stevens for advice on “public messaging” on the increasingly dangerous situation in the region, Gowdy said.

“He didn’t need help with (public relations), and he was asking for more security,” Gowdy said on CBS’ “Face the Nation.” Gowdy refused to release the emails on Sunday. But he said they point to “the total disconnect between what was happening in Libya with the escalation in violence — that we were a soft target, that there was an increase in anti-Western sentiment … while Washington is asking him to read and react to a Sidney Blumenthal email and help on how to message the violence.”

At one point, according to Gowdy, Stevens joked in an email: “Maybe we should ask another government to pay for our security upgrades because our government isn’t willing to do it.”

Gowdy described the emails as he defends his 17-month probe into the Sept. 11, 2012, attack that left Stevens and three other Americans dead, and anticipates Clinton’s long-awaited public testimony on Thursday. The event is a make-or-break moment for the investigation that even some Republicans say was designed to undermine Clinton’s second bid for president.

“I have told my own Republican colleagues and friends, shut up talking about things that you don’t know anything about,” Gowdy said Sunday on CBS.

Gowdy, a former prosecutor, insisted that his investigation is focused on the events before, during and after the deadly attacks. On Sunday, he cast Clinton as “just one out of 70” witnesses and suggested her testimony is of equal value with the others, at best. He’s only interested in Clinton’s testimony because she was secretary of state at the time of the attacks, so “you have to talk to her,” Gowdy said.

Of more interest, he suggested, is one week in June 2012 that’s covered by Stevens’ emails and is key to the investigation.

As Gowdy describes them, Stevens’ emails paint a picture of a newly installed ambassador in a consulate that’s been the target of increasing terrorist attacks. Almost immediately, he “knows that there’s been an uptick in violence, and he’s asking for more security,” Gowdy said on CBS.

“On almost exactly that day,” Clinton aide Jake Sullivan asks Stevens to read and respond to an email from Blumenthal, “who knows nothing about Libya,” Gowdy says.

Apparently additionally, Victoria Nuland, who is now assistant secretary of state for European and Eurasian Affairs, emailed Stevens, “and says, ‘We need help with your public messaging advice.'”