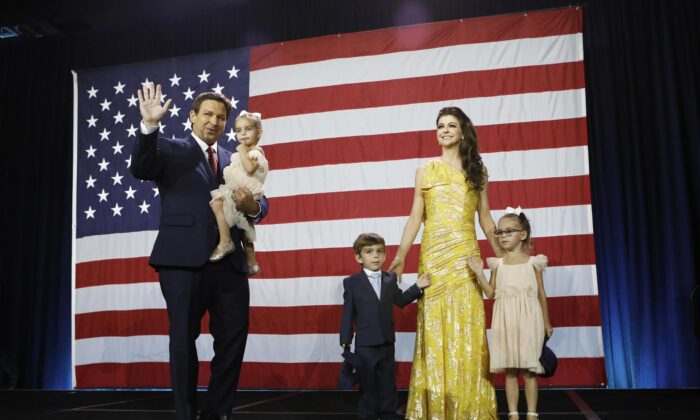 As the midterm results continue to roll in, governor and Senate races in swing states and deep blue states show Republicans catching up to Democrats, suggesting growing support among voters for a red wave to wash across America’s political landscape.

After all the polls closed on Election Day, the Democrats’ fragile grip on power was at risk as Republicans pushed state by state in a grinding bid to break the Democrats’ one-party hold on Washington.

In the House, Republicans were ahead of Democrats 199 to 172, with 371 of 435 seats up for election called and 218 needed for a majority, according to Associated Press data.

In the Senate, Republicans were ahead by a razor-thin 47 seats to 46, with 30 of 35 seats up for election called and 51 needed for a majority.

In the contest for governorships, Republicans were ahead 24 to 21, with 31 of 36 seats called.

House Republican Leader Kevin McCarthy (R-Calif.), who is poised to become speaker if the GOP takes control of the lower chamber, addressed a crowd of supporters after midnight in Washington on Election Day, expressing his expectations for a red wave to wash across U.S. politics.

“We are expanding this party,” McCarthy said, listing the races Republicans had won so far.

“The American people are ready for a majority that will offer a new direction that will put America back on track,” he added.

Besides the fact that the results that have come in so far show the GOP ahead overall, what’s particularly notable is that in swing states Georgia, Pennsylvania, and Florida, and in deep blue states New York and California, Republicans have gained ground on Democrats.

This reinforces the view that U.S. politics are, indeed, in the midst of a red groundswell.

In New York in the 2018 midterms, Democrat Andrew Cuomo won against the GOP nominee Marc Molinaro by 59.6 percent to 36.2 percent of the vote.

By contrast, in 2022, incumbent Gov. Kathy Hochul, a Democrat, was ahead 52.7 percent to Republican challenger Lee Zeldin, who had 47.3 percent of the vote with 93 percent of districts reporting, representing a far narrower margin.

In Georgia in 2018, Republican Gov. Brian Kemp won with 50.2 percent against Democrat challenger Stacey Abrams, who got 48.8 percent. In 2022, with 98 percent of districts reporting, Kemp was ahead 53.4 percent to Abrams’s 45.9 percent, representing an erosion of support for Democrats.

In California, the 2018 midterms had Democrat Gov. Gavin Newsom ahead 61.9 percent against GOP challenger John Cox’s 38.1 percent. In 2022, with 39 percent of districts reporting, Newsom was ahead of Republican Brian Dahle by 58.3 percent to 41.7 percent, a narrower margin.

In Florida in 2018, Republican Gov. Ron DeSantis won against Democrat Andrew Gillum by 49.6 percent versus 49.2 percent. In the 2022 midterms, with 99 percent reporting, DeSantis was ahead with 59.4 percent compared to Democrat challenger Charlie Crist’s 40 percent.

A look at some Senate race margins paints a similar picture.

In New York in 2018, Democrat Sen. Kirsten Gillibrand won against Republican challenger Chele Farley by 67 percent percent to 33 percent. In 2022, with 81 percent of districts reporting, Democrat Sen. Chuck Schumer was ahead of GOP challenger Joe Pinion by 55.9 percent to 43.1 percent, a far narrower margin.

Arizona is a battleground state where the Republicans lost ground in the 2022 midterms.

In 2018, Republican Gov. Doug Ducey won with 56 percent over Democrat David Garcia’s 41.8 percent. In 2022, Democrat Katie Hobbs was ahead of Republican Kari Lake by 50.9 percent to 49.1 percent, with 62 percent of districts reporting.