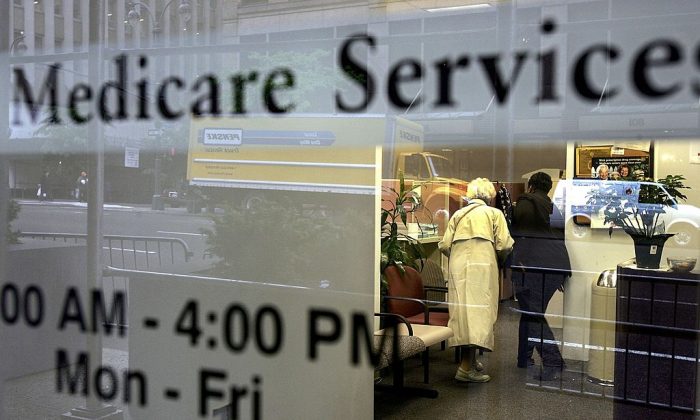 Seniors rush to register for the Medicare Part D plan before deadline on May 15, 2006 in New York City. (Spencer Platt/Getty Images)
Viewpoints

Government welfare is communism. Free money from the state, whether in terms of benefits, handouts, or non-universal tax-breaks, is a trap that will draw people into socialism and beyond.

Stage one of societal cancer is “welfarism.” Citizens get a few benefits for the elderly, the very young, those who can’t look after themselves, maybe some student loans. The economy remains pretty healthy. The symptoms are mild and noticed by very few.

As things get more “social democratic” (stage two), the benefits become more universal and more generous. The selective tax incentives become larger. At stage two, most people are getting something from the government. Some people are getting a lot. The government help is no longer seen as a gratefully received lifeline to get through tough times, but rather a “right.” People who are dependent on state funds grow increasingly envious of those who get more. People who work hard and get little grow increasingly resentful of those who work little and get a lot.

Honest, self-respecting businesses are at a competitive disadvantage against those less-scrupulous enterprises willing to “milk the system.” The economy starts to show signs of distortions and inefficiencies. Economic growth slows, while social tensions slowly rise. A small minority notice some worrying symptoms. Most remain oblivious.

In “socialism” (stage three), things begin to spiral out of control. Taxes are now way higher, and the economy is sluggish or negative. Benefits and handouts are near universal, and health care, education, and most social services are run by the state. Quality of service considerably declines as fewer and fewer private businesses can maintain a competitive service-oriented economy. Increasing private sector unemployment leads to growing unemployment rolls, and a corresponding growth in taxes, welfare expenditure, government make-work schemes, and a rapidly expanding public sector.

Those few surviving businesses either live off government contracts or have a corrupt relationship with government bureaucrats, organized crime, or both. Symptoms are now very obvious. The economy is imploding, waiting lines are endemic, and service quality is abysmal in almost every sector. A few are fighting back, but most are desperately trying figuratively to cannibalize their fellow citizens to survive.

Stage four is “communism.” Society’s immune system—the virtues of honesty, responsibility, and compassion—are virtually wiped out. The economy is in free-fall and social decline is evident everywhere. Resentment and jealousy are endemic. Hatred is rife, just contained only by the increasingly powerful military and state security services. The state controls all and is busily sucking every last ounce of life out of the economy and the people. Everything is free, but most of it is worthless. Health care is available to all (unless you’re an enemy of the state) but the quality is abysmal, and the queues are endless.

Unless you are politically connected, your elderly and chronically ill will die long before they get to share a hospital ward with 12 other people, an army of cockroaches, and a toxic soup of filth, bacteria, and viruses. By now, the disease is obvious to all. But, by that time, everyone is trapped. The leaders must watch their backs every second, lest their rivals stab them. They must repress the populace with terror, lest the people rise up and hang their leaders from lamp posts. The army and secret police must leech off the workers to get enough crumbs to feed their own families. The common people can’t organize a revolt because, in every darkened basement of 10 or 12 conspirators, three or four will be government informants ready to sell out their fellow plotters for a bigger room or a few more ration coupons for their families.

This is the terminal stage. Death can be staved off for a while with outside intervention, but the only possible cure at this stage is a desperate, bloody, and, almost certainly suicidal, revolt.

And it all started with just a little bit of harmless welfare.

It constantly amazes me as I travel across this great land how many Americans and even anti-communists fail to see the connection between government welfare and socialism and communism.

I often hear people tell me how much they love the constitution, but can’t wait for their Medicare to kick in. They’re for freedom but, hey, just got an extra benefit because their college-aged daughter is living at home. They love America, but they just hired another worker because the state gave them a wage subsidy to do so.

These people are all patriots, but they’re allowing stage one cancer to take hold in their own country. How can they complain when stages two, three, and four eventually destroy all they hold dear?

A friend of mine in New Zealand, I’ll call him Ian, is a committed libertarian. He has a favorite saying: “Being a libertarian costs.” He means that figuratively, as in the emotional pain and spiritual anguish he’s often had to endure. But, he also means it literally.

As a libertarian, Ian will take nothing from the state. In New Zealand, both health and accident compensation are socialized, and there are numerous incentives for businesses covered by the taxpayer. Everywhere you turn, from cradle to grave, there are government benefits, handouts, and tax incentives available to rich and poor alike.

Ian won’t take any of it. He’s paid massive amounts of tax to the state, but refuses to take anything in return. He drives on the state-funded roads because there is no choice; he pays for state-provided utilities if there is no private competition. Beyond that, Ian refuses every free service, every subsidy, every handout, every “incentive.”

If he injures himself, he is “entitled” to state accident compensation. He pays the taxes, then he pays out of his own pocket for his own care.

Freedom is everything to Ian, and he would rather pay double for many things than give up an ounce of his liberty.

If all of us were like Ian, we would never have to worry about socialism or communism again.

Welfarism, social democracy, socialism, and communism are cancerous and parasitic. If we do not let these parasites attach themselves to us, they can’t drain the life from our bodies and souls.

Every American must understand that the first step in fighting creeping totalitarianism is to get off every form of welfare and government largesse possible. This may be difficult at first, but becoming a free, fully self-responsible being is the only real way to effectively fight for liberty for all.