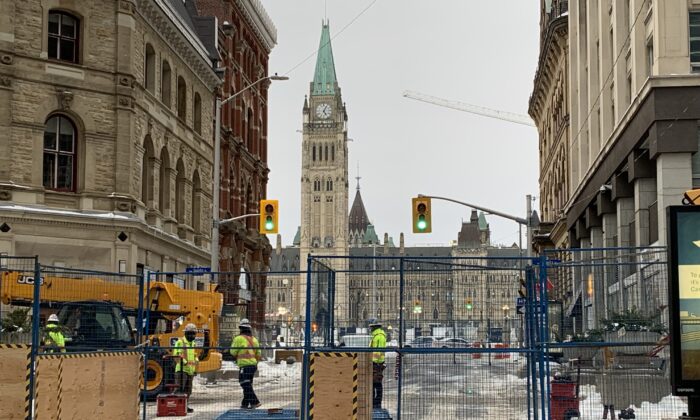 Workers build a fence on Metcalfe St. in Ottawa on Feb. 21, 2022, after the Freedom Convoy protest was cleared in the days prior. (Jonathan Ren/The Epoch Times)
Canada

The government will not allow a committee of parliamentarians tasked with reviewing the application of the Emergencies Act to access the classified information it is using to justify keeping the measures in place, senators heard as they debated the motion to maintain the public order emergency on Feb. 22.

The Senate began debating on Feb. 22 whether to confirm the government’s decision to invoke the Emergencies Act for the first time in Canadian history over protests and blockades of Canada’s borders by people opposing vaccine mandates and other COVID-19 restrictions.

Sen. Marc Gold provided the government’s arguments for invoking the Act in a speech outlining the need for Canada “to be able to respond to ongoing threats,” but as has previously been the case in the House of Commons, questions arose regarding whether the threshold has been met to declare a public order emergency.

“There was a certain amount of ‘trust us’ in the government’s justification for these extreme measures we are debating today,” said Sen. Dennis Glen Patterson of the Canadian Senators Group.

“However, this comes at a time when trust in governments at all levels clearly is eroding on the part of many citizens. I know this order is based on a perceived threat to the security of Canada, but yesterday during a briefing for senators, Minister of Public Safety [Marco] Mendicino referred to matters within his knowledge that could not be shared.”

Patterson asked if it would be possible to access the classified information the government is using to justify its actions.

“The short answer is no,” answered Gold, explaining that members of the review committee would have to take an oath of secrecy, but would not have the proper security clearance to access the material.

“The Parliamentary Review Committee will not be required to have the level of security clearance necessary to review confidential security information.”

Patterson pushed back, saying the review committee will then not be able to properly do its job without knowing the facts.

“I wonder how you can say that the review committee will have the power to seriously investigate—those were your words—when you have just said that certain matters will not be available to the committee,” Patterson said.

Gold said current laws to protect information need to be respected and reasserted that the public domain information presented by the government to justify using the Act is sufficient.

“[It] more than clearly satisfied the legal test that the government had reasonable grounds to believe that the national emergency was such that the act needed to be invoked and these measures put in place.”

The government invoked the Emergencies Act on Feb. 14 and the motion confirming it passed in the House of Commons along party lines on Feb. 21. Now it’s up to the Senate to debate and vote on it. If the motion passes in the Senate, a joint review committee of the House and Senate will be established. If the motion is rejected by the Senate, the Act will be immediately revoked.

Sen. Scott Tannas, leader of the Canadian Senators Group, was not satisfied with Gold’s argument, noting that no active protests remain to justify maintaining the emergency.

“What emergency exists today other than some secret emergency that you can’t tell anybody about and our oversight committee won’t get to know about either?” said Tannas.

The truckers’ Freedom Convoy, which called for the lifting of restrictive federal COVID-19 measures, arrived in Ottawa on Jan. 29 and remained parked on city streets for three weeks.

The organizers said their movement was non-violent and drew support from people across the political spectrum and from different backgrounds.