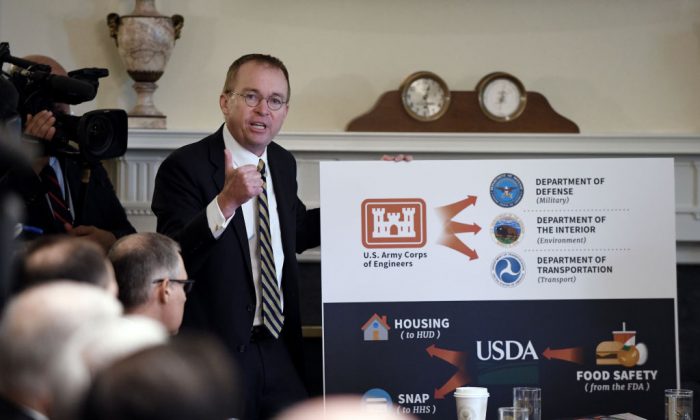 OMB Director Mick Mulvaney speaks about a government reform proposal during a cabinet meeting in the Cabinet Room of the White House, in Washington, on June 21. (OLIVIER DOULIERY/AFP/Getty Images)
Trump Administration

WASHINGTON—The Trump administration has unveiled a proposal to reorganize government departments in order to help federal agencies work better. Office of Management and Budget Director Mick Mulvaney has described the plan as the biggest federal government reform since the 1920s.

“It has been almost 100 years since anybody really reorganized the government at this type of scale,” he said on June 21 during a cabinet meeting hosted by President Donald Trump.

During the cabinet meeting, Mulvaney described the importance of fixing the “Byzantine nature” of regulations by citing several examples of inefficiencies among federal agencies.

Poultry companies, for example, have to deal with different government offices and a lot of paperwork because chickens and eggs are regulated by different agencies.

By the direction of @POTUS, we released a plan to make government more effective, efficient and accountable to better serve the American people.

“If you have a chicken, it’s governed by the USDA,” Mulvaney said. “If that chicken lays an egg, it’s covered by the FDA, but if you break the egg and make it into an omelet, that is now covered again by the USDA.

“A hot dog, the hot dog meat is governed by one, you put it in a bun, it’s covered by another.

“This is stupid. … This makes no sense,” he concluded.

The overhaul proposals stem from an executive order signed by Trump last year directing the Office of Management and Budget to create a plan to reorganize the executive branch. The executive order aims to improve the “efficiency, effectiveness, and accountability” of government by eliminating redundant federal agencies and programs.

As part of the overhaul plan, the Trump administration wants to merge the departments of Labor and Education into one agency that would be called the Department of Education and the Workforce.

The new department would be broken into four sub-agencies, to allow for a better focus on training skilled workers to meet future employment needs.

“This is what a lot of countries do,” said Mulvaney, adding that job training and educational training should be aligned to prepare students for jobs.

Education Secretary Betsy DeVos supported the merger plan, saying in a statement that the proposal “will make the federal government more responsive to the full range of needs faced by American students, workers, and schools.”

“I urge Congress to work with the Administration to make this proposal a reality,” she said.

According to the Competitive Enterprise Institute (CEI), a libertarian think tank, the administration’s plan will eliminate waste and duplication in workforce development programs.

“The current administration’s plan to merge the Department of Labor and Education is commendable,” stated Trey Kovacs, a policy analyst at the CEI.

“Combining the agencies will encourage the sharing of best practices that can lead to the elimination of poor-performing workforce development efforts and cultivate more successful government programs.”

Labor unions representing teachers and government workers, however, opposed the administration’s proposal, arguing that the reorganization plan would weaken the agencies and eliminate essential programs as well as public service jobs.

The administration’s other reform proposals include privatizing air traffic control, reforming the jurisdictions of the Department of Transportation, privatizing the U.S. Postal Service, and streamlining financial education and literacy programs.

There are 20 different federal agencies that deal with financial education and literacy programs, and, Mulvaney said, “most of them have no idea if they are effective or not.”