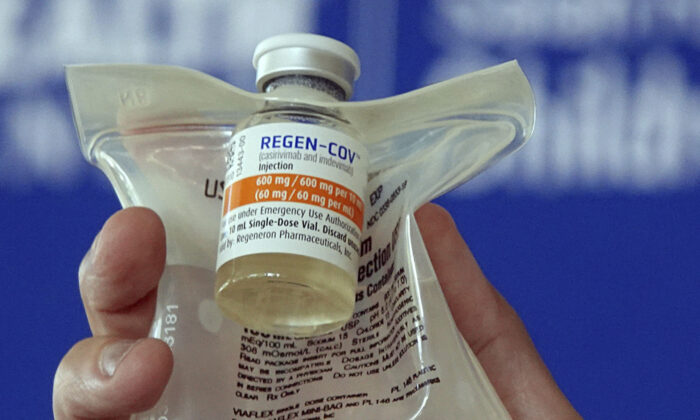 The head of a medical supplies company involved in the distribution and supply of monoclonal antibodies across southeastern and northeastern regions of the nation, told NTD in a Jan. 12 interview that government takeover of the monoclonal antibody supply chain has exacerbated backlogs and shortages.

“The way the products are being distributed right now, relying on the government to determine who gets what, that process can be very lengthy in terms of time,” Dealmed CEO Michael Einhorn said.

As a result, physicians are reporting “surpluses in certain areas, not enough in other areas” which has fueled frustrations when critical patients are not receiving antibodies for COVID-19 infections.

While it’s unclear how the monoclonal antibodies are being rationed among states, Einhorn said that “commercialization” of these products should be allowed, so that infusion centers that need them can order in products based on “patient volume.”

“If they have oversupply they wouldn’t order more,” Einhorn said, whereas when remedies are supplied by the state, “nobody’s going to say no the government” as the products are “free practically,” leading to mismatches in supply and demand.

“I find it very difficult to believe that, in a mere year, a governmental agency in a different state can figure out the dynamics of a local regional health care system,” he added.

One particular monoclonal antibody, sotrovimab made by GlaxoSmithKline (GSK) and Vir Biotechnology, is in high demand as emerging reports suggest it is more effective than other products against Omicron.

Dr. Marc Siegel, a practicing internist and a professor of medicine at NYU’s Langone Medical Center, wrote in an op-ed in USA Today that “Omicron is most susceptible to sotrovimab, made by GlaxoSmithKline, but in most states, it is almost impossible to find.”

Monoclonal antibody therapies have been shown to be effective in preventing severe disease or hospitalization in high-risk patients with mild to moderate COVID-19.

On Jan. 12, the Biden administration secured 600,000 more doses of sotrovimab for an undisclosed sum, bringing the total doses purchased by nations globally to roughly 1.7 million, according to Reuters. The additional doses will be delivered in the first quarter of 2022 according to GSK.

Since October 2021, the U.S. Department of Health and Human Services (HHS) has delivered over 385,000 doses of sotrovimab to states across the nation.

Florida Gov. Ron DeSantis on Jan. 7 criticized the Biden administration that had cut Florida’s supply of the remedy in half, to 150,000 doses. DeSantis added that before the government “seized control of the monoclonal supply,” Florida was administering 30,000 doses per week.

Under the Biden administration’s COVID-19 “action plan,” monoclonal antibodies are listed as a “life-saving” treatment, “shown to reduce the risk of hospitalization by up to 70% for unvaccinated people at risk of developing severe disease.”

The plan also identifies the remedy as a “key tool to improve health outcomes, prevent hospitalizations, and reduce the strain” on hospitals.