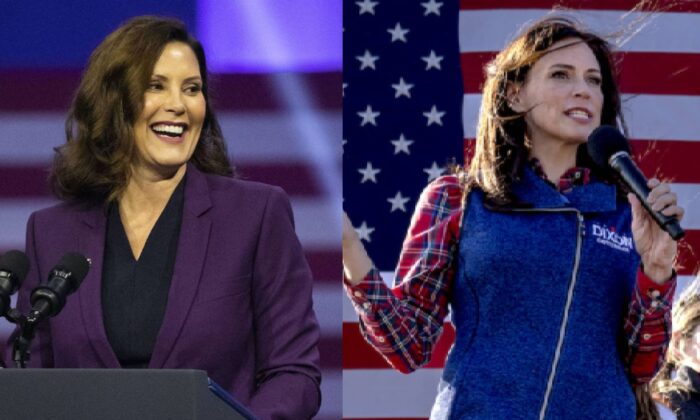 The governor of Michigan did not contest an accusation by her challenger that she cemented business ties with the Chinese Communist Party (CCP) as part of her effort to develop Michigan’s economy and defended the move as an effort to increase economic development.

The exchange between Democratic Gov. Gretchen Whitmer and Republican challenger Tudor Dixon occurred during a televised debate on Oct. 25, which aired on WXYZ-TV.

“I will fight for every dime to come to Michigan so I can make your life better,” Whitmer claimed.

Dixon was quick to retort, however, and accused the Whitmer of offering massive amounts of taxpayer monies to CCP-controlled companies in order to get them to develop facilities in Michigan.

“You should be careful of where all of your dimes go if Gretchen Whitmer is in charge,” Dixon said. “Because she just offered $715 million of your taxpayer dollars to a Chinese corporation to come to the state of Michigan.”

The accusation was an apparent reference to the Whitmer administration’s approval of $715 million in grants and tax exemptions for Gotion Inc., a U.S. subsidiary of China-based Guoxuan High-Tech Power Energy Company.

Guoxuan’s chief executive is one Li Zhen, a Chinese billionaire who served in a leadership role for a regional affiliate of the CCP, which is believed to be a part of the regime’s propaganda-oriented United Front Work Department.

The U.S. taxpayer monies handed over to the company by the Whitmer administration are expected to result in the creation of a new EV battery plant on a 523-acre parcel of land in Michigan.

Though the administration has promised the factory will bring 2,000 new jobs to Michigan over 10 years, there is no guarantee that that will happen, nor that the jobs will go to the people of Michigan or even American citizens.

“She can tell you all she wants that she is improving economic development and keeping automotive jobs here,” Dixon said, “but we’re hearing that battery plants are going outside of Michigan unless they’re owned by the Chinese and have strong ties to the Chinese Communist Party.”

“Your tax payer dollars are not safe with Gretchen Whitmer.”

Dixon’s claim is in line with laws (pdf) in communist China which require that Chinese companies or foreign companies with a majority stake owned by Chinese interests must maintain a CCP cell within the company to advocate for the Party.

Whitmer did not deny the accusation but instead said that her administration was “making historic progress when it comes to economic development” by creating such incentives.