Gov. DeSantis Warns Time for Hurricane Evacuation Is Over in Several Counties 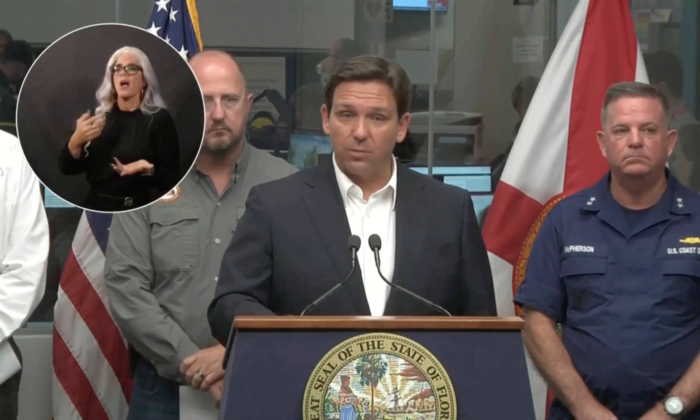 Florida Gov. Ron DeSantis speaks to give an update on preparations for Hurricane Ian on Sept. 27, 2022. (Florida Governor's Office/Screenshot via NTD)
By Jack Phillips

The National Hurricane Center’s (NHC) current track shows the storm will make landfall somewhere in Charlotte County at around 2 p.m. ET. The county and surrounding areas will see the highest impacts from the storm, which was upgraded to a strong Category 4 system with 155 mph winds.

People in Collier, Lee, Charlotte, and Sarasota counties could no longer safely evacuate, DeSantis said. They should stay inside and get off the roads, he added.

“If you are in any of those counties, it’s no longer possible to safely evacuate. It’s time to hunker down and prepare for this storm,” DeSantis warned.

Hurricane Katrina, for example, had storm surge flooding of between 25 to 28 feet along portions of the Mississippi coast when it hit the United States in 2005 and 10 to 20 feet above normal levels along the Louisiana coast.

DeSantis, a Republican, said that Ian could strengthen to become a Category 5 hurricane with 157 mph winds or greater.

“So, this is a major, major storm,” he said, noting there was a “significant” strengthening of the storm overnight.

Authorities urged more than 2.5 million residents to evacuate their homes for higher ground. If Ian strikes the Tampa area, it would be the first hurricane to make landfall there since the 1921 Tarpon Springs storm.

DeSantis had warned late Tuesday night that evacuation would become difficult for those who waited much longer to flee because increasing winds would soon force authorities to close highway bridges.

“You need to get to higher ground, you need to get to structures that are safe,” DeSantis said, adding that widespread power outages would leave millions without electricity once the storm strikes.

“I do have concerns about complacency,” Criswell said on Tuesday. “We’re talking about impacts in a part of Florida that hasn’t seen a major direct impact in nearly 100 years. There’s also parts of Florida where there’s a lot of new residents.”

Ian churned across the southeastern edge of the Gulf of Mexico headed for Florida after thrashing Cuba, knocking out the electrical grid for 11 million people and ravaging the western end of the island with violent winds and flooding.