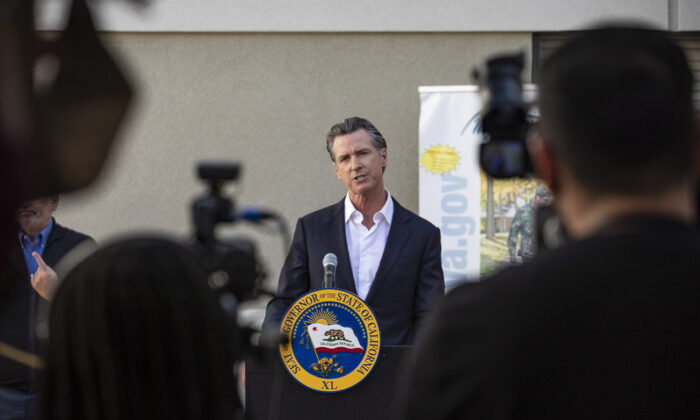 California Gov. Gavin Newsom has called on water associations to take “aggressive actions” to increase water conservation and warned that mandatory water restrictions may lie ahead this summer if the state does not significantly cut down its consumption.

Newsom made the comments during a meeting with leaders from the state’s largest urban water suppliers—including those covering Los Angeles, San Diego, and the San Francisco Bay Area—and water associations on May 23 amid worsening drought conditions.

“Every water agency across the state needs to take more aggressive actions to communicate about the drought emergency and implement conservation measures,” Newsom said. “Californians made significant changes since the last drought but we have seen an uptick in water use, especially as we enter the summer months. We all have to be more thoughtful about how to make every drop count.”

Newsom also called on water suppliers to “better engage” their customers to ensure all Californians are attempting to save water in the state.

In July 2021, the Democratic governor declared a drought emergency and called on Californians to voluntarily reduce their water use by 15 percent. But by the end of March 2022, the state had failed to meet that goal and Newsom issued an executive order asking local agencies to increase their response to the ongoing drought, the governor’s office said.

On May 24, California’s State Water Resources Control Board, under direction from Newsom, is set to vote on a statewide ban on “watering of non-functional turf in the commercial, industrial and institutional sectors” according to Newsom’s office.

It will also vote on regulations that would require local agencies to implement water use restrictions amid a potential 20 percent decline in supplies because of extreme weather.

If approved by the board, every city in the state will be covered by the regulations directing decreased water usage.

The first three months of this year were the driest in the state’s recorded history, Newsom said, with the state’s largest reservoirs currently at half of their historical averages, and the state’s snowpack—which provides 30 percent of the state’s water—is at just 14 percent of average.

Despite this, the state only used 3.7 percent less water during that period than in the same period in 2020, according to the State Water Resources Control Board.

“Currently, local water agencies have implemented restrictions on about half of California’s population. If the Board’s regulations are approved, every urban area of California will be covered by a local plan to reduce water use,” Newsom’s office said on Monday.

The governor’s office is also calling on Californians to conserve water by limiting outdoor watering, taking shorter showers, taking showers instead of baths, using a broom as opposed to a water hose to clean outdoor areas, and washing clothes in a full load.