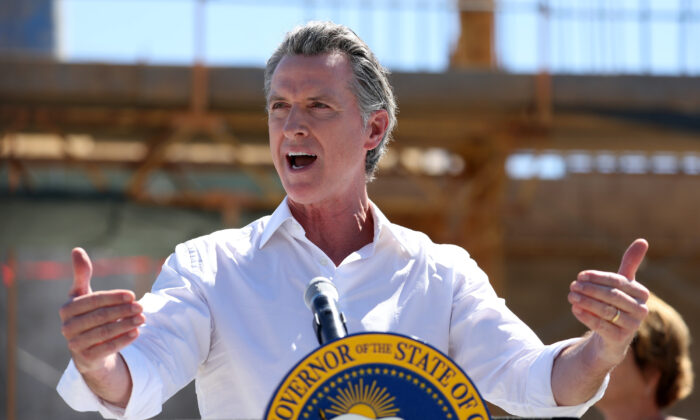 California Gov. Gavin Newsom on Monday announced that he signed legislation targeting some fast food franchises to lift minimum wages to $22 per hour and change working conditions. Opponents have described the bill as “hypocritical” and “ill-considered.”

The bill will create a 10-member Fast Food Council appointed by Newsom, a Democrat, and other state lawmakers.

“California is committed to ensuring that the men and women who have helped build our world-class economy are able to share in the state’s prosperity,” Newsom said in a statement.

“Today’s action gives hardworking fast-food workers a stronger voice and seat at the table to set fair wages and critical health and safety standards across the industry. I’m proud to sign this legislation on Labor Day when we pay tribute to the workers who keep our state running as we build a stronger, more inclusive economy for all Californians.”

The council will be made up of fast food workers, employee advocates, franchisees, franchisors, and representatives from the Governor’s Office of Business and Economic Development and the Department of Industrial Relations.

According to the bill, the state-appointed council will establish minimum standards on wages, working hours, and other working conditions for workers at fast food restaurants that have “100 or more establishments nationally that share a common brand, or that are characterized by standardized options for decor, marketing, packaging, products, and services.”

The exception to this rule is for fast food chains that as of Sept. 1 operate an on-site bakery.

The California Restaurant Association (CRA) argued that the bill unfairly targets some franchises to the detriment of others and the community.

“By signing AB 257 into law, Governor Newsom has not leveled the playing field but instead targeted one slice of California’s small businesses and consumers who rely on counter service restaurants to feed their families,” a statement from the organization reads.

“As individual employers and neighborhood restaurants across the state, we will use every tool at our disposal to protect our consumers, workers, and other job providers from the pain and havoc that will result from enacting this bill.”

CRA also decried the signing of the bill while inflation in the United States is at record high levels, saying that consumers and small business owners will pay a 20 percent increase “to fund the outsourcing of the legislature’s duties to union-led bureaucracy.”

“By arbitrarily singling out a sliver of the restaurant industry, California’s approach imposes higher costs on one type of restaurant while sparing others, putting some workers at a disadvantage and picking clear ‘winners’ and ‘losers.’

“Governor Newsom ignored the arbitrary and haphazard nature of this bill and signed into law a reckless precedent which will have far-reaching harmful impacts beyond the state’s borders,” the organization said.

McDonald’s USA President Joe Erlinger, a California native, said that the state government has been driving businesses out of California with its policies.

Erlinger said he supports wage increases and noted that McDonald’s operates well in jurisdictions with high minimum wage regulations in the United States and around the world.

But he said that the approach California has taken “targets some workplaces and not others.”

“It imposes higher costs on one type of restaurant, while sparing another. That’s true even if those two restaurants have the same revenues and the same number of employees,” he said in an open letter.

“If you are a small business owner running two restaurants that are part of a national chain, like McDonald’s, you can be targeted by the bill,” he added.

“But if you own 20 restaurants that are not part of a large chain, the bill does not apply to you. For unexplainable reasons, brands with fewer than 100 locations are excluded. Even more mystifying, the legislation excludes certain restaurants that bake bread. I can only conclude this is the outcome of backroom politicking.”

Erlinger said the bill is “lopsided, hypocritical and ill-considered” and noted that economists have warned that it will “drive up the cost of eating at a quick service restaurant in California by 20 percent at a time when Americans already face soaring costs in supermarkets and at gas pumps.”