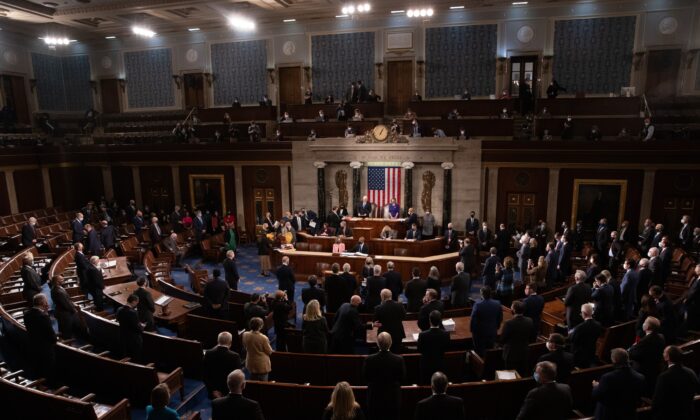 The House floor as seen in a file photo. (Graeme Jennings/Pool/AFP via Getty Images)
By Jack Phillips

Republicans on Sunday flipped an Oregon congressional district, giving the GOP another seat as control of the House is still up for grabs.

That congressional district was recently redrawn and Rep. Kurt Schrader (D-Ore.) was ousted in the primary by McLeod-Skinner. Previously, Chavez-DeRemer was the mayor of Happy Valley, Oregon.

“I am humbled and grateful for the outpouring of support we received throughout this campaign,” Chavez-DeRemer told KATU-TV. “From the suburbs of Clackamas, down to rural Linn and Marion counties, and over to the Cascades to Central Oregon, one thing was clear to me: Oregonians wanted common-sense solutions to their everyday problems. Families needed a Congresswoman to tackle inflation, keep us safe, and focus on what’s best for Oregon families.”

The Republican said she was proud of her bipartisan record, asserting it was “critical to approach every issue through a non-partisan lens. That is exactly what I promise to do as your next Congresswoman. This is a historic victory for Oregon, but the work starts now.”

“I vow to work for all Oregonians toward a better future for our children,” she told the outlet.

Elsewhere in Oregon, Democrats were able to keep control of the 1st, 3rd, and 4th congressional districts. The Republican Party kept the 2nd district, which encompasses about two-thirds of the state’s area.

Chavez-DeRemer, a small business owner, built her campaign around concerns over homelessness and rising crime in Portland, which neighbors some of the district’s suburban communities.

McLeod-Skinner, an attorney and regional emergency coordinator, previously ran unsuccessfully for Oregon’s 3rd Congressional District in 2018. She sought to highlight Chavez-DeRemer’s stance on abortion and claimed she was too conservative for the district.

The Congressional Leadership Fund, spent more than $2.7 million on several ads in the district, which stretches from Portland’s southern suburbs to the central high desert city of Bend.

As for control of the House, Republicans currently have 212 seats to Democrats’ 204. Either party needs 218 seats to take a majority.

The GOP took a blow to its chances of retaking the majority after Democrat Marie Gluesenkamp Perez was called the winner over Republican Joe Kent in Washington state’s 3rd congressional district, located north of Portland, Oregon, across the Columbia River. That seat is currently held by Rep. Jaime Herrera Beutler (R-Wa.), who had voted to impeach former President Donald Trump and who lost to Kent in the primary.

On Saturday, AP and other outlets called Nevada’s Senate race for Sen. Catherine Cortez Masto (D-Nev.), allowing Democrats to retain control of the upper congressional chamber. Several Republican senators this weekend blamed GOP Leader Mitch McConnell (R-Ky.) and other members of the Republican Senate leadership, saying that a vote to elect new leaders should be postponed.

CORRECTION: This article has been updated to correct GOP candidate Lori Chavez-DeRemer’s district. The Epoch Times regrets the error.