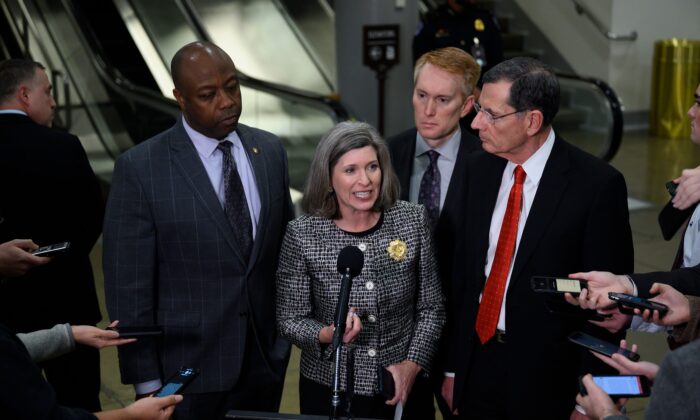 Republican senators are pushing back on President Joe Biden’s $6 trillion 2022 budget proposal, saying it can be summed up as “higher taxes, higher spending, and higher debt” while Democrat leaders have praised it as a declaration of their values.

Sen. Joni Ernst (R-Iowa) said on Wednesday that the budget’s priorities are amiss.

“President Biden is proposing higher taxes on working Americans and cuts to our national defense to pay for a massive expansion of the federal government and enactment of the radical progressive demands, like parts of the green New Deal. What can’t be paid for is simply put on the nation’s credit card, adding trillions of dollars of red-ink,” Ernst told the senate chamber.

“Where we choose to invest speaks to what we value as a nation. This year’s budget, the first of my presidency, is a statement of values that define our nation at its best,” Biden said in a May statement.

In a budget fact sheet put out by the White House, the administration highlighted that trillions will be put into government-funded programs for items like childcare, climate change, education, health, and research programs, as well as infrastructure. This includes the American Jobs Plan and American Family Plan.

An Iraqi war veteran who served 23 years in the Iowa Army National Guard, Ernst criticized Biden’s $3 billion cut to military spending while doubling the size of the IRS.

“Who does the President think he will be able to call on should we need to fight off foreign threats, his new army of IRS agents? We face new threats around the globe and lowering our defenses as President Biden is proposing will only embolden our adversaries, Americans may fear an IRS audit, but Red China won’t,” Ernst said.

Ranking member of the Senate Judiciary Committee Sen. Chuck Grassley (R-Iowa) said Biden’s proposal will not become law if Congress does its job. Grassley said the trillions in the first pandemic relief package were justified given the lockdowns but this new spending is unreasonable.

“Americans will see this for what it is—a very unserious political document containing a laundry list of liberal wish list policies, unmoored from economic or fiscal reality,” Grassley said on Wednesday.

“A federal budget should be a statement of our national values. President Biden’s budget is an unequivocal declaration of the value that Democrats place on America’s workers and middle-class families, who are the foundation of our nation’s strength and the key to Build Back Better,” Pelosi said in a written statement.

Sen. John Barrasso (R-Wy.) said the administration is overspending on things like unemployment and that contrary to Biden’s message, the May job report was no reason to celebrate.

“Since I took office, more jobs than ever been created in the first four months of any presidency in modern history,” Biden had said last month.

Barrasso said of the president’s comments, “The percentage of Americans in the labor force actually went down, another weak job report. Disappointing but not surprising, and we know why it slowed down.” He added that there are more than $9 million in unfilled jobs and that a major factor contributing to this is that people are getting more from unemployment payments.

Acting White House budget director Shalanda Young told a Senate committee hearing Tuesday that the budget would only be able to go ahead if Congress approves the associated tax hikes for corporations and high-income households to support the proposed increases in spending.

While the White House has forecast that the extra spending should be paid off within 15 years from the proposed tax increases, Dr. Daniel Lacalle, chief economist at Tressis, has warned that history shows us that these estimates tend to err on the side of optimism.

Emel Akan and Melanie Sun contributed to this article.