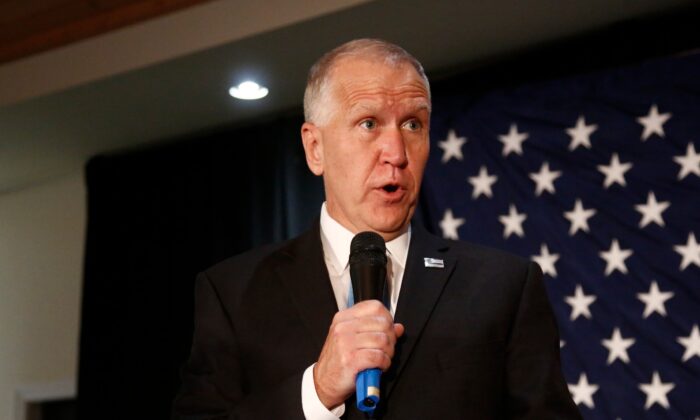 President Joe Biden’s administration would be blocked from issuing settlement payments to illegal immigrants if new legislation introduced by top Republicans is passed by Congress.

“We are seeing the most illegal immigration this year alone than ever recorded, and now President Biden wants to give illegal immigrants a payout, further rewarding lawlessness and chaos,” Tillis said in a statement.

“It would be unthinkable to pay damages to a burglar who broke into your home for the ‘psychological trauma’ they endured during the crime. And yet the Biden administration wants to reward migrants who illegally entered our country with up to $450,000 each for just that reason,” Cotton added.

The payments in question are being considered by the Department of Justice to settle lawsuits brought by illegal aliens who were separated from family members under the Trump administration.

The Biden administration initially denied that illegal immigrants would receive such payments but later acknowledged they may, with Biden even saying the aliens “deserve some kind of compensation.”

The new bill would quash the efforts, although it would need some Democrat support to be approved.

Democrats hold a slim majority in the House of Representatives, and control the 50-50 Senate by virtue of the tiebreaking vote that Vice President Kamala Harris can cast as president of the chamber.

Republicans are also angling to block the payments through an amendment to the National Defense Authorization Act for Fiscal Year 2022. Sens. Josh Hawley (R-Mo.) and Steve Daines (R-Mont.) were among the group that introduced the amendment last month, although no Democrats have yet indicated their support.

Sen. John Barrasso (R-Wyo.) said on the Senate floor on Dec. 2 that the payments “would case a mad rush, if not a stampede, to the country and into the country.”

Homeland Security Secretary Alejandro Mayorkas, speaking to a Senate panel in November, rejected the idea that the payments would serve as a “pull factor” for illegal immigration.

He received support from Sen. Dick Durbin (D-Ill.), who called it “a ridiculous idea” that people would be drawn to the United States because families that were separated receive payments.