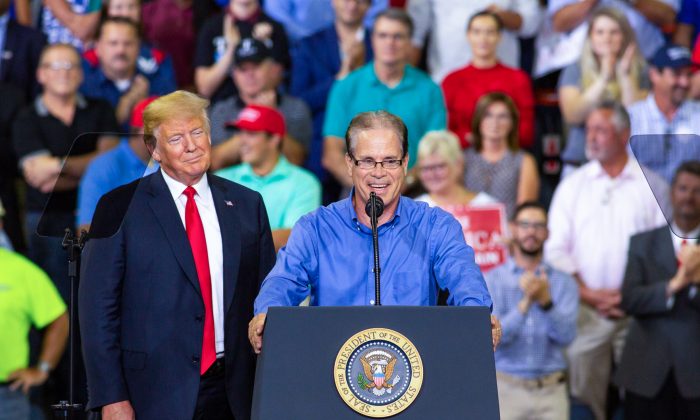 Sen. Mike Braun (R-Ind.) filed paperwork on Nov. 30 to run for governor of Indiana, potentially opening up his U.S. Senate seat in 2024.

Braun, who was endorsed by former President Donald Trump, was first elected to the Senate in 2018, unseating Sen. Joe Donnelly (D-Ind.), after serving in the Indiana state House.

“Mike Braun has filed his paperwork to run for governor and will be making an official announcement of his candidacy very soon,” Josh Kelley, Braun’s chief of staff, said in a Nov. 30 statement to several news outlets, confirming his decision to run for governor.

“That filing did occur yesterday,” Braun told Politico. “We’ll talk to you down the road.”

In a Politico interview in September, Braun indicated that he would run for governor.

Scott had criticized McConnell, who was ultimately reelected, over what he said were poor strategic decisions on part of the longtime GOP leader. Republicans were unable to retake a majority in the Senate during the Nov. 8 midterms.

“I don’t think we’re generating the results politically or governmentally,” Braun told reporters as he confirmed he favored Scott. “We don’t have an agenda. We don’t have a business plan. That doesn’t work anywhere else.”

At least two House Republicans have indicated a possible run for Braun’s Senate seat in 2024.

“Congressman Banks is seriously considering running for the U.S. Senate and is strongly positioned to win a statewide primary and general election in Indiana. He will spend the holidays discussing with his wife, family, and friends around the state how he can best serve Indiana,” a spokesperson for Rep. Jim Banks (R-Ind.), the head of the House Republican Study Committee, told The Hill on Nov. 30 after Braun’s announcement.

Unnamed sources told Politico in September that Rep. Victoria Spartz (R-Ind.), a Ukrainian-born first-term House lawmaker, may consider running for the Senate seat. However, Spartz and her team haven’t publicly commented on the matter.

Doden, the former head of the Indiana Economic Development Corp., has been running for governor since early 2021, according to local media. He has emphasized his role in the administration of then-Indiana Gov. Mike Pence, who was later elected vice president under Trump.

As for Democrats, it’s unclear who might challenge Braun and the other possible Republican candidates in the 2024 Senate race.

There was early speculation that Indianapolis Mayor Joe Hogsett, a Democrat, would launch a Senate bid. However, Hogsett announced this month that he is seeking a third term as mayor of Indiana’s largest city and capital.

Meanwhile, Democrats will face a daunting task in holding onto their majority in the 2024 elections, when they will be defending 21 seats to the Republicans’ 10.

Two of those seats are in Republican-leaning states West Virginia and Montana. Another five are in the swing states of Ohio, Pennsylvania, Nevada, Wisconsin, and Arizona, all of which will be in play during the presidential election.

Currently, Democrats have a 50–49 majority in the Senate with Georgia’s runoff election scheduled for Dec. 6 between Sen. Raphael Warnock (D-Ga.) and Republican candidate Herschel Walker. Early voting is underway and has been robust so far, Georgia election officials say.