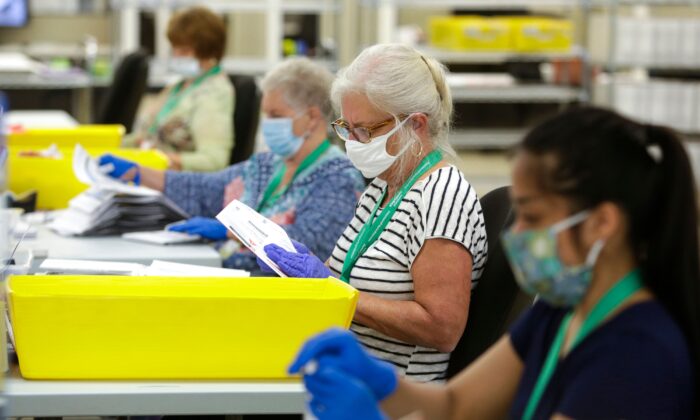 Pennsylvania Republicans are arguing a 2019 law that largely expanded mail-in voting in the commonwealth has been made invalid by a court ruling.

A group of 14 Republican lawmakers filed a lawsuit against the state’s acting secretary of the commonwealth, Leigh Chapman, in the Commonwealth Court of Pennsylvania on July 20, seeking again to throw out Act 77, Pennsylvania’s universal mail-in ballot law.

The move comes about two months before voters are scheduled to begin sending in mail-in ballots for midterm elections that feature high-profile races across the state.

The lawsuit claims that the mail-in voting law should be nullified under a federal appeals court’s May decision that had allowed election officials to count undated mail-in ballots. The panel stated that throwing out mail-in ballots in that election for lacking a handwritten date would violate voters’ civil rights. The Supreme Court of Pennsylvania has quietly dismissed Republicans’ request to overturn the court’s order.

Yet provisions of Sections 6 and 8 of Act 77 both require voters to “fill out, date and sign the declaration printed on such envelope,” which goes against federal law based on the court’s judgment.

State Rep. Seth Grove, chair of the House State Government Committee, also said recently in a letter that “the entire bill should now be void.”

Gov. Tom Wolf’s administration wrote in a response to a state lawmaker’s query on July 20 that the federal appeals court decision didn’t trigger the non-severability provision. That’s because the lawsuit had targeted Lehigh County’s decision to not count the ballots, not the validity of the date requirement, according to the response.

Act 77 was approved by the state Legislature and signed into law in 2019 by Wolf, a Democrat. Courts haven’t always chosen to enforce non-severability provisions in the past.

According to the state’s election agency, more than 4.2 million people voted in person in Pennsylvania during the 2020 election, compared to the 2.6 million who voted by mail—which includes both absentee voting and no-excuse mail-in voting.

Last August, the same 14 Republican lawmakers filed a lawsuit against the mail-in voting law, saying it was unconstitutional. Bradford County Commissioner Doug McLinko filed a similar legal challenge in September 2021 before the two suits were consolidated into one.

A Pennsylvania trial court then struck down Act 77 in a 3–2 decision in late January. However, this decision was immediately appealed to the Pennsylvania Supreme Court. The case is still pending, yet under state law, Act 77 was automatically reinstated upon appeal.

The state’s 2019 mail-in voting law has become a hot topic for frontrunners on the 2022 campaign trail, with Republican gubernatorial nominee Doug Mastriano vowing to repeal it if he is elected, while his Democratic rival, state Attorney General Josh Shapiro, has vowed to defend the law.

On July 12, the state sued officials from three counties to force their local governments to count undated mail-in ballots from the recent primary election; Republican Senate candidate David McCormick filed a lawsuit on May 23 to ensure all mail-in ballots submitted without a handwritten date were qualified in the tightly contested Republican primary election for the U.S. Senate in Pennsylvania.