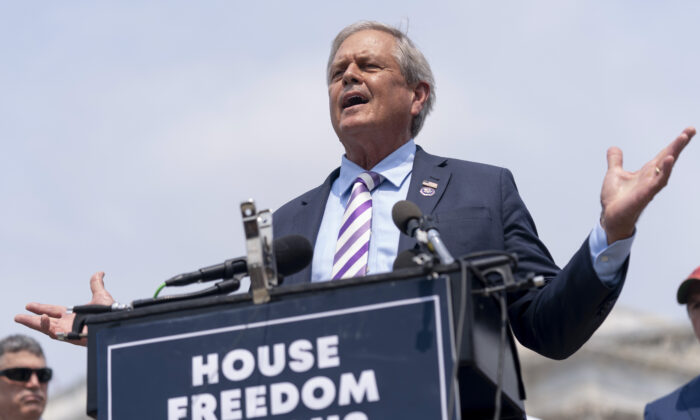 Rep. Ralph Norman, R-S.C., speaks at a news conference held by members of the House Freedom Caucus to complain about Speaker of the House Nancy Pelosi, D-Calif. and masking policies on Capitol Hill in Washington, on July 29, 2021. (Andrew Harnik/AP Photo)
Constitutional Rights

House Republicans have introduced a bill that would block federal agencies from tracking religious exemption requests for mandated vaccines after an obscure federal agency announced a pilot program for such a database in early January.

In September 2021, President Joe Biden imposed the most sweeping vaccine mandates in U.S. history. Originally, Biden’s mandates would have required that around 100 million Americans be vaccinated, including military servicemen, federal employees, and private sector workers.

The private sector mandate—by far the most contentious—was struck down by the Supreme Court in mid-January. But others, including a mandate for all healthcare workers and federal workers, remain in place.

Under constitutional law, employees still subject to the mandates may request an exemption on religious grounds. However, the federal government raised eyebrows after an obscure agency announced a pilot program to track and register these requests.

Earlier this month, the Pretrial Services Agency (PSA) announced a pilot program that would record “personal religious information” of employees with “religious accommodation requests for religious exception from the federally mandated vaccination requirement.”

An investigation by the conservative-leaning Heritage Foundation discovered that 19 federal agencies had already implemented, or were considering implementing, the PSA system to keep tabs on those who had requested, or had received, a religious exemption from Biden’s vaccine diktat.

A further review by The Epoch Times found an additional six agencies who are interested in or are actively using the system.

Historically, the PSA’s job was to gather information and make recommendations about newly arrested defendants in the federal criminal system. Some have been left scratching their heads about why Biden would choose such a little-known agency to run the pilot program.

The Heritage Foundation speculates that the system is a “test run” for a nationwide database of all religious exemption requests made by federal workers. The system, they wrote in a blog post, “will likely serve as a model for a whole-of-government push to assemble lists of Americans who object on religious grounds to a COVID-19 vaccine.”

Now, Republican lawmakers in the House, led by Reps. Ralph Norman (R-S.C.) and Ashley Hinson (R-Iowa), are looking to block the system, which they say opens Americans up to “retribution” for practicing their faith.

Their bill, nicknamed the Religious Freedom Over Mandates Act, would do just that by barring the use of federal funds for any such database.

“No Federal funds may be used to establish, operate, maintain, or support any system of records on religious accommodations requested by, or granted to, an employee, detailed, contractor, consultant, intern, applicant, volunteer, or any other person with respect to any COVID-19 vaccination requirement,” reads the text of the bill.

Speaking to Fox News about the legislation, Norman said, “The ability for individuals to openly practice their faith without fear of retribution is a precious right we must guard closely.”

“As if overreaching government vaccine mandates aren’t bad enough, it is highly inappropriate for federal dollars to be used to collect information about someone’s religious beliefs,” Norman argued. “The only way to prevent this information from being abused is to prevent its collection in the first place, and I thank Rep. Hinson for joining me in this effort.”

Hinson also commented on the legislation.

“Any form of database tracking religious beliefs flies in the face of our First Amendment,” observed the Iowa Republicans. “U.S. citizens are guaranteed the right to make their own medical decisions without fear of government reprisal.”

Given the current makeup of the House, the bill has little chance to go far.

Since the beginning of Biden’s presidency, congressional Democrats have largely walked in lockstep with the administration, particularly on COVID policy.

To become law, the legislation would need to get through committee, come to the House floor for a vote, pass the Senate, and be signed by Biden.

But Democrats in Congress have given no indication that they intend to abandon Biden’s COVID regimen anytime soon. Without substantial support from Democrats, including a handful of defections in the House and at least 10 in the Senate, the bill will not be able to pass. Even if it overcame these hurdles, it is all but certain that Biden would veto the legislation.

Though the legislation is doomed to failure in Congress, states may try to challenge the tracking program on their own authority. Over the past year, more than half of the Union has challenged federal COVID diktats. If the federal government tries to double down on the program, Biden may find himself facing steep opposition from the states and the courts once again.