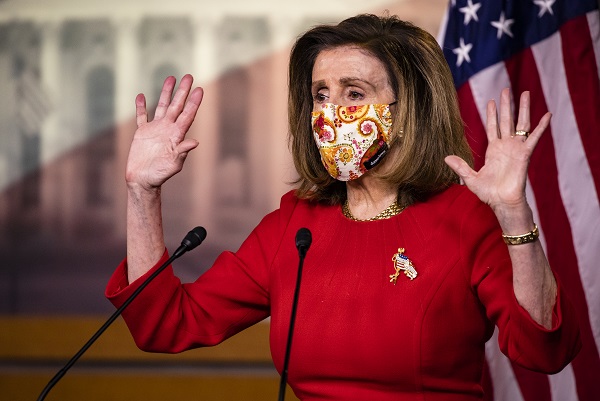 Speaker of the House Nancy Pelosi (D-Calif.) speaks during her weekly press conference at the Capitol on Feb. 11, 2021. (Samuel Corum/Getty Images)
Congress

“The Speaker of the House failed to complete security screening on February 4th, and closed-circuit television footage can provide irrefutable proof that a violation occurred. We believe that you do not have the authority to selectively enforce the fines for failure to complete security screening,” the Republicans on the administration panel told House Sergeant-at-Arms Timothy Blodgett.

Rep. Rodney Davis (R-Ill.) is the ranking Republican on the panel that is chaired by Rep. Zoe Lofgren (D-Calif.). The other two Republican members of the committee are Rep. Barry Loudermilk (R-Ga.) and Rep. Brian Steil (R-Wis.).

“Speaker Pelosi needs to pay the fine for breaking her own security rules and the fines need to be equally enforced by the Sergeant at Arms. As described to us, the process the Sergeant-at-Arms is using now to determine who is fined is arbitrary and putting our Capitol Police officers in a difficult position,” the three members said in a separate statement making public their letter to Blodgett.

“While we remain opposed to the Speaker focusing security internally when the threat is, and has always been, outside the Capitol, the Speaker of the House needs to follow her own rules and the Sergeant-at-Arms needs to ensure she does,” the three stated.

A spokesman for Pelosi didn’t immediately respond to The Epoch Times’ request for comment.

Pelosi directed installation of the metal detectors just outside all entrances to the House floor in the wake of the Jan. 6 riot in which hundreds of protestors penetrated the Capitol building.

At one point during the violence, protestors penetrated both the House and Senate chambers. As many as five people died in connection with the protests, including U.S. Capitol Police (USCP) Officer Brian Sicknick and a 14-year Air Force veteran who was shot and killed by another, as yet-unidentified USCP officer.

Blodgett is in an acting capacity after succeeding Paul Irving as sergeant-at-arms when the latter resigned the day after the violence in the Capitol.

Also resigning that day was Senate Sergeant-at-Arms Michael Stenger. The sergeants-at-arms are, with the USCP, responsible for the security of the Senate and House. USCP Chief Steven Sund resigned the same day.

Pelosi was observed by several members going around the metal detectors as she entered the House chamber on Feb. 4. The rule adopted at her insistence just two days before requires a $5,000 penalty for all first-time violators.

The letter made public on Feb. 11 by the three GOP members wasn’t their first demand on the issue. In a Feb. 5 statement, the trio stated that “yesterday at approximately 9:59 am, multiple members of the House observed the Speaker entering the House chamber without completing security screening.”

The trio stated that they expected Pelosi to pay the fine and asked Blodgett to inform them when she had done so.

But Blodgett responded: “Only the USCP can determine whether an individual has failed to complete security screening as only the USCP has sufficient training to determine compliance with USCP screening procedures.

No such report has been made public by the USCP.

Two Republicans have been assessed the fine to date, Rep. Louie Gohmert (R-Texas) and Rep. Andrew Clyde (R-Ga.). Both men are challenging the fine.

Gohmert issued a statement at the time, saying he had stepped out of the House chamber to use the nearby restroom.

“At no time until yesterday did anyone mention the need to be wanded after entering the restroom directly in front of the guards. The three main entrances have metal detectors, but the House floor entrance from the Speakers’ Lobby does not. Originally, I had gone around the metal detectors a few times until it was mandated. I have been complying for weeks since.

“I explained to the Capitol Police officer that I had never been required to be screened again from the restroom immediately by the House floor since the metal detectors had been in place at the other doors. I said they had witnessed me walk the few feet to the men’s room, enter and take the few steps back. No one ever mentioned or made that a requirement until yesterday.

“Unlike in the movie ‘The Godfather,’ there are no toilets with tanks where one could hide a gun, so my reentry onto the House floor should have been a non-issue.”

A spokesman for Gohmert told The Epoch Times he was at a retreat and couldn’t be reached for comment.

Clyde authored a recent op-ed in The Daily Caller saying he is challenging the constitutionality of the fine because it prevents him from fulfilling his duty as a congressman.

“As a sitting congressman, I have the right to enter the House floor unimpeded. This right is clearly written into the Constitution under Article 1, Section 6, because members of Congress are voting on behalf of their constituents. I cast my district’s vote, so it’s not about me.”