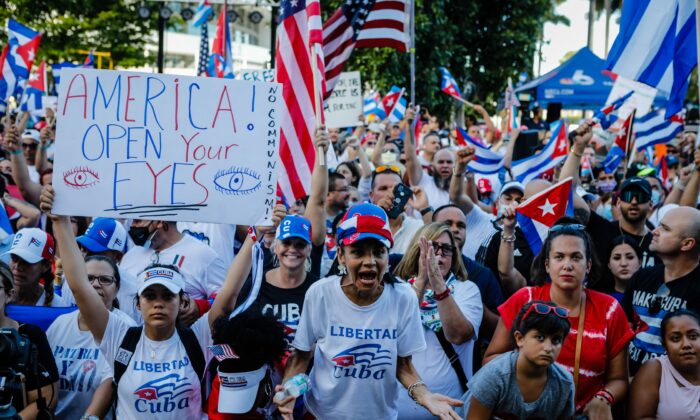 A woman holds a sign reading "America Open Your Eyes" as people wave Cuban and U.S. flags during a Freedom Rally showing support for Cubans demonstrating against their government, at Freedom Tower in Miami, on July 17, 2021. (Eva Marie Uzcategui/AFP via Getty Images)
Viewpoints

GOP Must Embrace Their New Hispanic Friends to Save the Republic

We live in a country that’s either on the brink of a revival or on the brink of extinction as we knew it. It’s on a razor’s edge and it’s very difficult to tell which way it will go—to the constitutional republic envisioned by its Founders or what amounts to a fiefdom of Communist China under some phony rubric like The Great Reset with every Tom and Jane crammed into a new version of soviet government housing while being informed by the state they’re happy. They should love it.

It’s hard to be optimistic, surrounded as we are by the myriad Great Reseteers in our educational system, corporations, medicine, media, and entertainment, all singing like the conformists they are from the same dismal playbook. Even the Mouseketeers are Reseteers these days. It already seems next to hopeless.

No tan rápido, chapulín! That’s not so fast, grasshopper, in Central American Spanish. (Saltomontes in Madrid.)

Before you start actually eating grasshoppers or other insects like the tedious green crowd is urging, look to our Southern border. Yes, it’s open, and isn’t that good?

Well, not exactly good. In fact, bad. But something else is brewing. The people streaming over that border, completely illegally, are largely Hispanics (mixed with Africans, Eastern Europeans, Yemenis, and so forth, but still basically Hispanics).

And the Hispanics already here legally—18.7 percent of the population, a considerably larger percentage than blacks and Asians—don’t like this crazy open border nonsense for the most part. For some reason these good religious family people are not attracted to drug dealers, coyotes, human traffickers, terrorists, or cartel-leading murderous gangbangers, not to mention having a sprinkling of corpses, sometimes a lot more than a sprinkling when buses and trucks turn over, in their backyards.

This doesn’t seem to bother President Joe Biden and his crew because, hey, they’re potential voters. The administration is even floating giving them all identity cards to make it easier. But it does bother normal decent people who don’t like to see their cousins dying of fentanyl overdoses flown in from China to Mexico from whence, after having been disguised to look like the less threatening cocaine and methamphetamine, now even ordinary prescription pills, they’re brought over that notoriously open border to addict and ultimately kill our citizens.

Which they do quite effectively. Some 108,000 died from overdoses in 2021, a record 2022 is already on track to beat easily. (For comparison, the total number of American servicemen killed in the Iraq War was about 2,000.) This makes the open border policy of the Biden administration the real murderer of black and brown people.

Result: Hispanics and other minority voters, naturally fed up, are beginning to swallow that other pill, the red pill, and move to the GOP.

But don’t believe me. Believe that the most liberal of networks NPR that had a discussion of the subject as recently as July 23, 2022, with Scott Simon (no relation) interviewing political scientist and putative minority voter expert Ruy Teixeira. In 2002, Teixeira was the co-author of “The Emerging Democratic Majority,” but things looked a little different in 2022.

“TEIXEIRA: But what’s interesting and very concerning, I would think, to Democrats—they tended to write off losing white working-class voters as kind of like, what can you do? You know, they’re a declining population. They don’t like the multicultural, multiracial America. They’re all a bunch of racists and xenophobes. But I think what’s underscored the potential overall class problem for the Democrats is the movement of nonwhite working-class voters away from the Democrats in recent period of time, particularly Hispanic working-class voters. And they gained, in terms of their advantage, among white college educated voters. So that’s quite a shift.

“SIMON: Shifting, I’m sure you’ve heard the phrase, from the factory floor to the faculty lounge.

I’d much prefer the factory floor myself these days—and I don’t think that’s just me.

What we may be witnessing is a breakup of pretty much the most reprehensible and reactionary of all American electoral tropes, beloved by the Democrats—identity politics. We might even be able to go back to Dr. King’s sane and inherently moral idea of judging people by their character and not by their skin color. It’s creepy white progressives (those faculty lounge types), after all, who seem to be attracted to critical race theory far more than black people. This would be a return to common sense, of all things.

But this will only happen if Republicans know how to deal with their possible good fortune. With exceptions, the Republican Party officials I have seen since moving to Nashville seem more intent on jockeying for position and preserving power. They don’t work together well for a common cause. In California, when I lived there, it was even worse.

Democrats seem to be able to work together for just about anything, even when they hate each other. Dick Morris has a timely and accurate warning on Newsmax on how the Democrats are trying to divide and conquer Republicans. In this instance, he should be listened to.

Meanwhile, the GOP is being handed an unprecedented opportunity. We live in a time when the first lady of the United States doesn’t know a bodega from a bogayda (whatever that is) and thinks it’s cute to compare Hispanics to breakfast tacos. If a Republican had been that clueless they would have been run out of town after having been declared a racist-sexist-white supremacist, and possibly a homicidal maniac.

As we all know, the working class of this country is racist referred to by Teixeira is a despicable lie, but one that has been imbued in every corner of our culture by so-called elites who are the real racists in their actual behaviors. It’s one giant shell game designed to deceive. It’s our job to welcome our Hispanic friends, and black and Asian friends as well, as warmly as possible to finish off this wretched propaganda once and for all.

We’re all Americans after all. End of story. No hyphens.