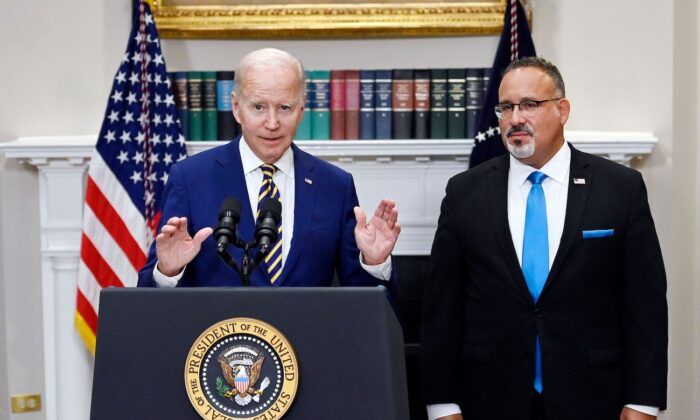 A coalition of Republican-led states petitioned the Supreme Court on Wednesday to reject President Joe Biden’s bid to reinstate his student loan forgiveness scheme and instead keep it frozen until litigation around it is resolved, while accusing the administration of exploiting the COVID-19 pandemic to hide the president’s “true goal” of erasing student debt.

In a Supreme Court filing (pdf), the GOP-led states argued that Biden exceeded his executive authority in announcing the student debt wipeout, which is the subject of several lawsuits and recently ordered to be put on hold by a court.

But the Biden administration filed an emergency appeal with the Supreme Court last week, seeking to overturn the lower court’s decision and reinstate the student loan forgiveness scheme.

The Biden administration argued in a filing (pdf) that the 8th circuit court’s “erroneous injunction” would lead to a number of harms, including leaving “millions of economically vulnerable borrowers in limbo.”

The administration also suggested in the filing that the Supreme Court could bypass the 8th circuit court and hear the case on an expedited basis, while also citing the national emergency declared due to the COVID-19 pandemic and provisions in the Heroes Act as justification for Biden’s executive decision to provide student debt relief.

But the GOP-led states—Arkansas, Iowa, Kansas, Missouri, Nebraska, and South Carolina—said in their filing that Biden’s request to lift the freeze is not justified by any “emergency or imminent harm” while lifting the injunction “risks unleashing on the States a wave of harms that could not be undone.”

The states also pointed to a separate ruling by a federal judge in Texas that struck down Biden’s debt cancellation program, arguing that this would remain in place even if the Supreme Court sides with the Biden administration’s appeal to lift the freeze.

After student loan payments were put on hold in early 2020 under the Trump administration due to the pandemic, payments were slated to resume on Jan. 1, 2023.

The Biden administration announced on Nov. 22 that it would extend the moratorium through June 30, 2023, as the program faces legal challenges in courts.