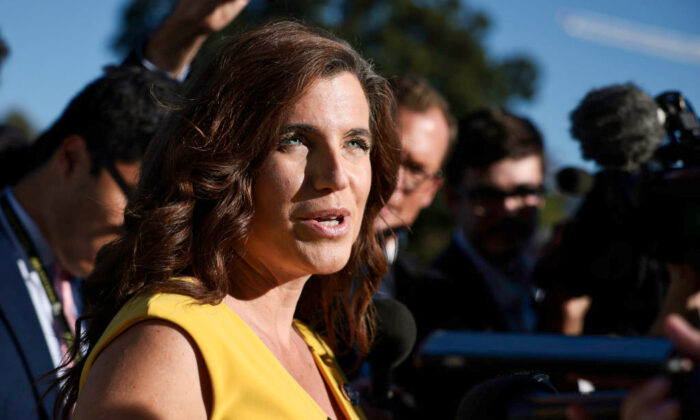 Rep. Nancy Mace (R-S.C.) is demanding answers from the U.S. Department of Health and Human Services (HHS) about why the federal agency hasn’t promoted the use of nasal sprays to treat or prevent COVID-19.

In a four-page letter released to The Epoch Times, Mace asks HHS Secretary Xavier Beccera why the agency has ignored studies that show that nasal sprays are an effective treatment of COVID-19 and why it hasn’t promoted their use to the public during the pandemic. The freshman South Carolina Republican lawmaker implies a coverup by HHS and other federal agencies over the benefits of nasal sprays against COVID-19 in her letter.

“It has come to my attention that even prior to the initial vaccines, HHS and its components, the National Institute of Health (NIH) and the Centers for Disease Control (CDC), were aware of data and expert determinations that simple nasal hygiene could serve as an effective additional layer of protection against the SARS-COV-2 virus,” Mace wrote in her Feb. 15 letter to Beccera.

Mace also wants the department to explain why HHS and other federal agencies “haven’t informed the American people about the potential benefits” of nasal sprays and other “prophylaxis and therapeutics.”

The letter follows stories by The Epoch Times about a lawsuit filed by the U.S. Department of Justice (DOJ) and Federal Trade Commission (FTC) against Xlear Inc. for promoting its all-natural xylitol- and grapefruit seed-based nasal spray as a prevention and treatment for COVID-19. The stories covered several world studies, including ones conducted in the United States that concluded that the spray had proven virucidal effects.

One of the stories also featured an exclusive interview with Dr. Mark Cannon, a global expert on the use of xylitol, who discussed the longtime use of the natural sweetener in other countries against viruses, specifically respiratory viruses such as COVID-19.

Robert Housman, senior counsel for Xlear, told The Epoch Times that he expects more members of Congress, like Mace, to demand that federal agencies such as the FTC explain why they’re filing lawsuits that appear to be suppressing beneficial treatments of COVID-19.

“The federal government’s failed plan to vaccinate its way out of the pandemic is falling apart, and I think you are starting to see people realizing in the meantime that nasal hygiene … in the expert community and within some Congress as well—can be an important adjunct in upper respiratory disease and prevention and treatment,” he said. “I don’t really get what the government is doing, but I think a big piece of solving that is going to be our court case.”

Housman served as a senior adviser during the Clinton administration and was appointed staff director of the White House Task Force on Drug Use in Sports including the U.S. Olympics. He also served as a legal adviser to World Anti-Doping Agency (WADA).

His client, Xlear, is one of several companies that have received warning letters from a federal government agency since the start of the pandemic ordering them to stop promoting their nasal spray products as a prevention and treatment of COVID-19. It’s the only company challenging the demand.

Housman emphasized that the company repeatedly offered to work with federal agencies to study the benefits of nasal sprays so that it could win FDA approval.

In alluding to the DOJ suit against Xlear, Mace asks the HHS to explain why it didn’t work with manufacturers to facilitate and fast-track testing “and if warranted EUA approvals.”

Last May, Housman submitted a “research professionals citizen’s petition” seeking guidance from the CDC regarding the use of nasal sprays to combat COVID-19 and cited the studies to show they were anti-virucidal. The petition represented researchers and health care professionals who had been treating COVID-19 patients and were studying ways to counter the disease.

In a letter dated June 16, 2021, the CDC rejected that response. Sandra Cashman, executive secretary to CDC’s chief of staff, wrote in the letter that there was “no hard evidence of efficacy” of nasal sprays “in terms of viral load reduction.”

The studies presented by Housman included a Florida study conducted in November that specifically found that Xlear’s nasal spray “demonstrates virucidal effects against SARS-CoV-2.” It also concluded that “using a virucidal nasal spray could become a cutting-edge element in the prevention and treatment of COVID-19 disease.”

The study was led by Dr. Gustavo Ferrer, named one of the best doctors in the United States by U.S. News and World Report. Ferrer, a former White House consultant for the Affordable Care Act, is the founder of the Cleveland Florida Cough and Interstitial Lung Disease Clinic and former director of respiratory research for the United Nations University, the research arm of the U.N. He has frequently appeared on several national television networks, including CNN and NBC News.

Cashman wrote that the CDC’s denial of the petition was also due to concerns about the safety of nasal sprays, stating that “while nasal sprays and irrigations are generally safe, they are not without risk.” Cashman said that there had been “serious infections” associated with neti pots “or other exposure to tap water or use of adulterated products.”

The DOJ and FTC filed their lawsuit after the FTC sent a letter to Xlear in October, a month before the Florida study findings were released, warning the company that it was violating federal law and demanding it immediately stop advertising its nasal spray to treat COVID-19.

“It is unlawful under the FTC Act, 15 U.S.C. § 41 et seq., to advertise that a product or service can prevent, treat, or cure human disease unless you possess competent and reliable scientific evidence, including, when appropriate, well-controlled human clinical studies, substantiating that the claims are true at the time they are made,” said Serena Viswanathan, acting associate director of FTC’s division of advertising practices, in her letter to the Utah-based company.

Viswanathan told Xlear that within 48 hours of receipt of her letter that it was to contact FTC Assistant Director Richard Cleland via email with a description of specific actions it had taken in response to the agency’s concerns.

Cleland, Viswanathan, and Beccera didn’t respond by press time to requests for comment about Mace’s requests or the DOJ/FTC suit.