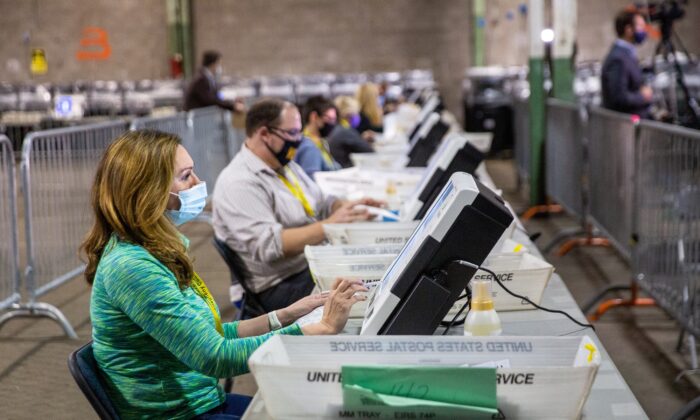 A Republican state Senate candidate is appealing the decision by Allegheny County, Pennsylvania to count over 2,000 mail-in ballots with no date.

Ziccarelli, 38, an attorney, filed a petition in Allegheny County Common Pleas Court to set aside the 2,349 ballots in question.

The Allegheny County Board of Elections voted on Nov. 10 to count the ballots even though they had no date on them.

“They applied on time, received their ballots, voted their ballots, returned them on time with their signature, their printed name, their address—the only thing they’re missing is their date,” County Solicitor Andrew Szefi told the Pittsburgh Tribune-Review. “They were received timely, and our … ballot sorting machine imprints a date received on each envelope as they’re scanned.”

County officials said there would be a 48-hour period to appeal the vote and that they would put aside the ballots until an appeal was filed or the time period expired.

Ziccarelli argued that the Election Code does not allow mail-in ballots to be counted unless they are signed and dated.

“Neither the Election Code, nor any other legal principle governing the conduct of the Board, permits the Board to exercise discretion relative to the examination of mail-in ballots or alter the scope and nature of its duties,” the complaint said, the Tribune-Review reported.

The Board did not comply with its lawful duty and in deciding the count the ballots, overstepped its reach, the Republican candidate said.

Ziccarelli is neck-and-neck with state Sen. Jim Brewster, a Democrat. Just 20 votes separate them, as of Saturday morning.

Requests for comment sent to the campaigns of Brewster, 72, and his challenger weren’t returned.

Ziccarelli said in a statement last week that her campaign “will fight to count all legally cast ballots and look forward to a successful result.”

In light of the appeal, Allegheny County said in a statement it would not be doing anything with the ballots until a hearing on the appeal takes place on Nov. 17.

Another approximately 1,500 ballots that were received between Nov. 4 and Nov. 6 are not being counted at this time after a Pennsylvania judge ruled Thursday that Secretary of State Kathy Boockvar overstepped her authority in changing the deadline for voters to provide proof of identification just days before the election.

That decision is expected to be reviewed by a higher court in the coming days.