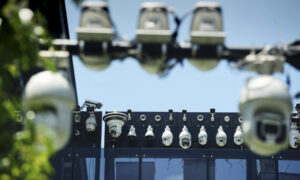 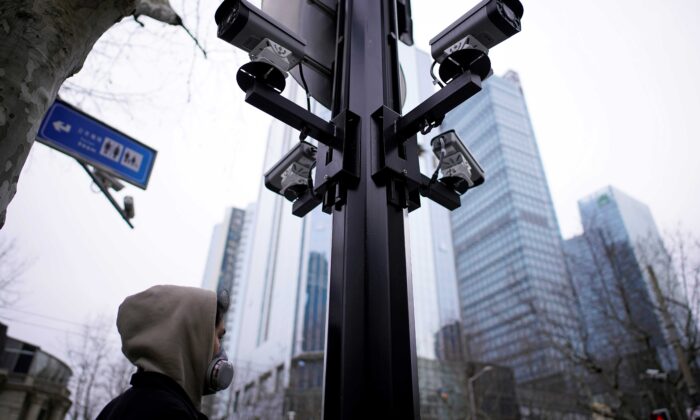 A man wearing a protective face mask walks under surveillance cameras as China is hit by an outbreak of the novel coronavirus, in Shanghai, on March 4, 2020. (Aly Song/Reuters)
Constitutional Rights

U.S. law enforcers are increasingly relying on geofence warrants, a new surveillance tactic that civil libertarians say violates the Fourth Amendment, according to a recent transparency report from Google.

Unlike typical warrants that authorize the surveillance of specific targets, geofence warrants allow police to collect vast troves of geolocation data from devices within a given area in a certain timeframe. Law enforcers reportedly used geofence warrants to investigate crimes committed during last summer’s Black Lives Matter riots, as well as the Jan. 6 Capitol breach—fueling concern that data from journalists and other innocent bystanders also were swept up in the process.

While law enforcement’s use of geofence warrants has been public knowledge for years, Google’s Aug. 19 report is the first time a major company has disclosed statistics on the surveillance method.

About 95 percent of geofence warrants are from state jurisdictions, with the remainder coming from federal agencies, the report stated. California is the most active geofence warrant issuer in the country, making about 18 percent of all requests—followed by Texas (9 percent), Florida (8 percent), and Michigan (5 percent).

Geofence warrants comprised about one-quarter of all demands for information from law enforcers in 2020, according to Google.

Prior to 2019, Google received relatively few geofence warrants—only a handful in the second quarter of 2018, and none in the first quarter.

But in June 2018, the U.S. Supreme Court handed down a landmark judgment in Carpenter v U.S., ruling that law enforcement’s warrantless collection of cellphone geolocation data violated the Fourth Amendment.

Civil liberties groups say the Carpenter decision was the impetus for the rise of several new surveillance tactics, including geofence warrants, purchasing data in bulk from companies rather than obtaining it via warrant, and the use of “stingrays”—devices that simulate cell towers and collect signals from devices nearby. Law enforcers have also taken to controversial “keyword warrants” that identify every user who searched for a specific keyword, phrase, or address.

The civil liberties groups charge that these methods are designed to skirt Fourth Amendment protections.

“The Fourth Amendment means what it says, even in the digital age,” Rep. Tom McClintock (R-Calif.) said in June when introducing the Cell Site Simulator Warrant Act.

However, these bills haven’t made it out of committee. The Project on Government Oversight (POGO) also has lamented the lack of legislation to address geofence warrants.

POGO stated that a law to address law enforcement’s use of stingrays could likely be tailored to include geofence warrants, too.

“Like stingrays, law enforcement demands for geofence data risk sweeping in sensitive data about large groups of people not suspected of wrongdoing,” POGO stated in its analysis of the Google report. “Legislation built around a super warrant requirement could effectively mitigate the dangers that geofence warrants pose, and serve as an important companion to the two bills already under consideration.”

The full extent of law enforcement’s use of geofence warrants is still unclear, as Google is the only major company to publicly disclose the number of demands it has received. Microsoft has publicly denied being subject to geofence warrants, while Apple and Facebook have been tight-lipped on the matter, according to the nonprofit tech watchdog The Markup.

Google’s Aug. 19 report stated that the company works to protect the privacy of its users while supporting the necessary work of law enforcement.

“We carefully review each request to make sure it satisfies applicable laws, and notify users when their identifying information is disclosed in response to a geofence warrant, unless expressly prohibited by law or a court order,” Google stated.