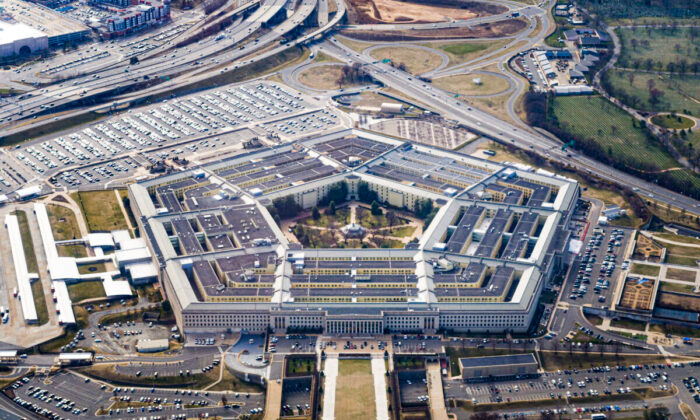 The Pentagon is seen from the air in Washington on March 3, 2022. (Joshua Roberts/Reuters)
By Katabella Roberts

Amazon, Google, Microsoft, and Oracle have been awarded lucrative cloud contracts valued at up to $9 billion in total, the U.S. Department of Defense (DOD) announced on Dec. 7.

The contracts were awarded to the four tech companies to help build the Joint Warfighting Cloud Capability (JWCC), which will replace the Joint Enterprise Defense Infrastructure (JEDI) and effectively streamline cloud computing for the U.S. military and make it more resilient.

“The purpose of this contract is to provide the Department of Defense with enterprise-wide, globally available cloud services across all security domains and classification levels, from the strategic level to the tactical edge,” the DOD said in a statement.

The DOD stated that the expected completion date is June 8, 2028.

The deal will bring the military more in line with private-sector companies, which generally opt for a multi-cloud approach split among multiple vendors, as opposed to relying on a single vendor or company. This helps reduce the risks of potential network disruptions or outages.

JWCC is a successor to the multibillion-dollar cloud computing project JEDI, which was awarded to Microsoft in 2019.

However, the $10 billion IT modernization project sparked an intense legal battle between Amazon and Microsoft, with the former challenging the Pentagon’s decision to award Microsoft the lucrative contract.

Amazon, a key player in the cloud infrastructure market, had initially been seen as a front-runner to win the project and argued that the Trump administration had intervened in the process of awarding the contract.

In 2020, the Pentagon’s inspector general conducted a review and subsequently issued a report stating that there was no evidence that the award had been influenced by former President Donald Trump.

The DOD later announced that it wouldn’t be going through with the multibillion-dollar project that was awarded to Microsoft.

In a statement at the time, the Pentagon said: “The Department has determined that, due to evolving requirements, increased cloud conversancy, and industry advances, the JEDI Cloud contract no longer meets its needs. The Department continues to have unmet cloud capability gaps for enterprise-wide, commercial cloud services at all three classification levels that work at the tactical edge.”

Microsoft stated in a blog post at the time that it understood the DOD’s rationale behind pulling the deal.

“The DOD faced a difficult choice: continue with what could be a years-long litigation battle or find another path forward. The security of the United States is more important than any single contract, and we know that Microsoft will do well when the nation does well,” Microsoft stated.

The Dec. 7 announcement comes after the Pentagon had delayed its decision earlier this year to award a JWCC contract while it evaluated proposals from the four companies.

The DOD changed its approach following the legal battle between Amazon and Microsoft and instead asked the tech giants, along with Google and Oracle, to place bids on the cloud contracts.