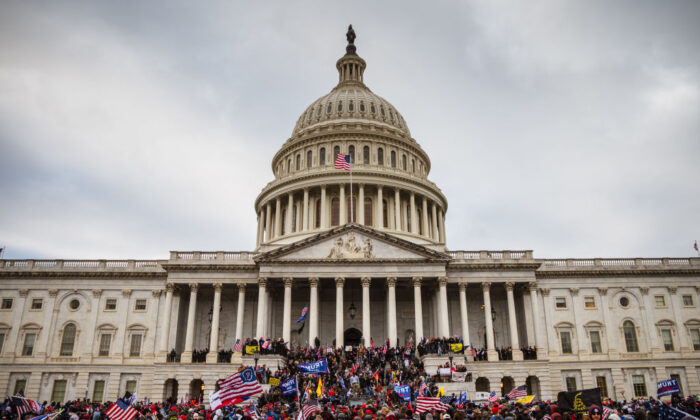 A large group of protesters stand on the East steps of the Capitol Building after breaching its grounds in Washington, D.C., on Jan. 6, 2021. (Jon Cherry/Getty Images)
By Samantha Flom

A recent filing (pdf) in the case of one Jan. 6 defendant revealed that Google provided the FBI with location data for 5,723 cellular devices that were determined to be near the U.S. Capitol that day.

Filed on Oct. 17 on behalf of defendant David Rhine, the motion urged the court to suppress Google location history evidence, and “the fruits of that evidence,” that had been submitted by the government on the grounds that the information had been obtained by a “modern-day general warrant” in violation of the Fourth Amendment, which prohibits unreasonable searches and seizures.

A geofence warrant permits law enforcement to search a database of digital location data to find mobile devices—and by extension, their owners—that were active within a specified area.

According to the filing, the government “compelled” Google to search all accounts for those with location data that fell within a four-acre area around the Capitol between 2 p.m. and 6:30 p.m. on Jan. 6, 2021.

While the government’s application for the geofence warrant and the warrant itself remain sealed, Rhine’s lawyers noted that the application relied on the assumption that, “because of the pandemic, the security surrounding the Capitol in preparation for the Inauguration, the security surrounding the Capitol for the protests of the Certification, and the limited scope of the geographic area covered by this warrant, there will probably be no tourists or bystanders to be found in any of this data.”

In other words, the government claimed that those located within four acres of the Capitol on Jan. 6 were likely there to engage in criminal activity.

Noting that their client’s mere presence near the Capitol was not necessarily evidence of a crime, Rhine’s attorneys continued, “The breadth and vagaries of the items to be seized was an invitation to do a general search of the private papers—Google account—of anyone who may have been in or near the geofence.”

According to Wired, Google is served approximately 10,000 geofence warrants in the United States each year.

In a statement defending the company’s handling of such warrants, a Google spokesperson told Wired: “We have a rigorous process … that is designed to protect the privacy of our users while supporting the important work of law enforcement. When Google receives legal demands, we examine them closely for legal validity and constitutional concerns, including over-breadth, consistent with developing case law. If a request asks for too much information, we work to narrow it. We routinely push back on over-broad demands, including over-broad geofence demands, and in some cases, we object to producing any information at all.”

“From the outset, the government enlisted Google to search untold millions of unknown accounts in a massive fishing expedition,” they noted in the filing. “Unlike scenarios where a company must search defined records to identify responsive data, the search here did not identify any specific users or accounts to be searched. Instead, the warrant forced Google to act as an adjunct detective, scouring the accounts of ‘numerous tens of millions’ of users to generate a lead for the government.”

On Nov. 30, the government responded (pdf) to Rhine’s attorneys’ motion, holding that it should be denied because the geofence warrant was “sufficiently particular,” had been tailored “to the greatest degree possible,” and was supported by probable cause.