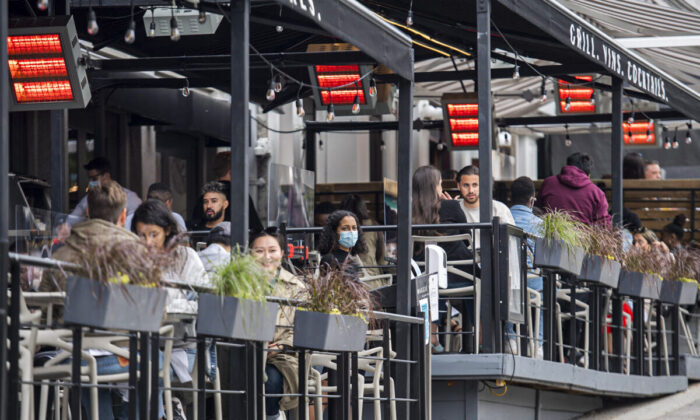 People dine in a restaurant in Montreal on May 30, 2021. (The Canadian Press/Graham Hughes)
Viewpoints

In early 1918, when World War I entered its final year, the H1N1 influenza A virus infected millions of people, causing the Spanish flu pandemic. By April 1920, after four waves and almost 100 million deaths, the pandemic ended. H1N1 became much less deadly and caused only ordinary seasonal flu. It had become an endemic virus.

Will history repeat itself? After two years of the COVID-19 pandemic and four waves of different variants, will SARS-CoV-2 become an endemic virus?

After my recent opinion piece “Omicron May Help End the Pandemic This Winter” was published, readers asked if I could cite peer-reviewed publications to support my pandemic-ending claim. Well, since the Omicron wave is still ongoing, my projection can only be as good as an educated prediction. But things are looking pretty good.

In the past week, there have been a few related research works published that point in the same direction—that Omicron is fast-spreading but less pathogenic. None of them are yet peer-reviewed, and that’s because the data is time-sensitive, so scientists choose to allow the public access to their research “live,” as the peer review process takes time.

So what does the new data suggest? Could the spread of Omicron end the pandemic? Waves come and go, so in order for Omicron to be the final wave, it needs to be able to stimulate strong and long-lasting immunity against potential future variants.

The hope for long-lasting immunity relies on protective T cell responses. In my previous article, I quoted a University of Cape Town study showing that long-lasting T cell response, induced either by vaccination or natural infection, cross-recognizes Omicron. The authors concluded that well-preserved T cell immunity to Omicron is likely to contribute to protection from severe COVID-19 caused by other variants.

On Jan. 10, the scientific journal Nature published a peer-reviewed article titled “Cross-reactive memory T cells associate with protection against SARS-CoV-2 infection in COVID-19 contacts.” Submitted to Nature by Imperial College London scientists five months ago, the article looked at T cell epitopes (very small protein fragments) from different SARS-CoV-2 proteins (S, N, E, and ORF1) in terms of their cross-reactivity to those of other species of human coronavirus OC-43 and HKU1, which cause the common cold.

They found a pool of T cell epitopes from S, N, and ORF1 proteins that were cross-reactive between SARS-CoV-2 and human coronavirus (huCoV). However, the specific T cell response that induces protection is from the epitopes of the N and ORF1 proteins, not the S protein (spike protein). They then concluded that in the second generation of vaccines developed against COVID-19, non-spike proteins should be included.

When I read the paper, I was less interested in the scientists’ recommendation on next-generation vaccine development than I was in their study of the non-spike proteins (N and ORF1) and their T cell epitopes’ cross-reactivity between SARS-CoV-2 and huCoVs, as this new information could shed light on detailed T cell immunity cross-protection between SARS-CoV-2 and huCoVs.

If you can recognize a distant cousin in a crowd, you can certainly spot your brother right next to you.

Light at the End of the Tunnel

For about a year now, scientists have been discussing the potential of SARS-CoV-2 to join the other four human coronaviruses as an endemic virus.

In a peer-reviewed paper titled “Immunological characteristics govern the transition of COVID-19 to endemicity” published in the prestigious journal Science in February 2021, scientists at Pennsylvania State University and Emory University stated that all human coronaviruses elicit immunity with similar characteristics. The COVID-19 pandemic is a consequence of a human population that hadn’t seen SARS-CoV-2 before. Once widespread infection (such as the Omicron wave) occurs across the world, the virus will eventually circulate endemically, meaning that infections may still happen but with milder symptoms and much less mortality.

There are two reasons that the transition from pandemic to endemic didn’t happen until Omicron: 1) all the widely used vaccines are based on the spike protein, which doesn’t induce a protective long-lasting T cell response, and 2) natural immunity wasn’t widespread.

The Nature paper disclosed that protective (IL-2 secreting) T cells are induced by SARS-CoV-2 infection. Accordingly, we could foresee that a wider spread of Omicron infection would induce a wider range of cross-reactive T cell immunity, subsequently offering more widespread protection against potential future SARS-CoV-2 variants. As a result, we are likely very close to being able to say goodbye to the pandemic.

Although we should be mindful that we’re not out of the woods yet and people are still suffering, I remain optimistic that we’re beginning to see the light at the end of the tunnel.

We also must remember that even when we say goodbye to COVID-19, we probably won’t be completely free of SARS-CoV-2. Even the seasonal flu kills more than half a million people globally every year, according to the World Health Organization. Another endemic virus will likely increase the burden on health systems around the world.

The good thing is, as I noted in my previous article, Omicron can be viewed as a live attenuated vaccine, which enjoys a very good track record among all vaccines. There have been about 11 diseases that attenuated vaccines were widely used to combat, such as measles, mumps, chickenpox, and polio. So far, none of these diseases have spread out of control after decades of vaccination.

Hopefully, Omicron will act like its other attenuated vaccine cousins, and with any luck, no other SARS-CoV-2 variants will emerge to become a pandemic in the future.

Joe Wang
Follow
Joe Wang, Ph.D., was a Molecular Biologist with more than 10 years of experience in the vaccine industry. He is now the president of New Tang Dynasty TV (Canada), and a columnist for the Epoch Times.