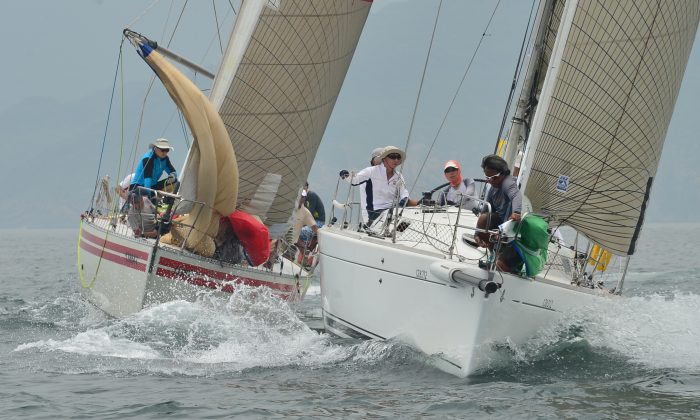 ‘Intrigue Plus’ and ‘Calamansi’ have a close encounter while rounding the Steep Island Mark during the first race of the Hebe Haven Quest Yachting Typhoon Series on Sunday June 8. (Bill Cox/Epoch Times)
International

Typhoon Series races generally take place covering island courses outside Shelter Cove to match wind conditions and the categories of boats taking part. IRC-A and -B boats normally cover additional legs to that of their slower counterparts, but good boat handling and navigational capabilities are required for all classes.

Take for example the first of this year’s races, visibility was very poor off Sai Kung last Sunday, probably as low as 800 metres so navigational aids were needed even for the more experienced sailors knowledgeable of local island layout.

Race-1 was due to start at 11am but wind conditions were only light and from weather predictions wind direction was expected to change as the day progressed, increasing the complexity of setting the courses. Race Officer Lesley Anderson finally got the IRC-A and –B boats away at 11.40am followed by three more waves (IRC-C, IRC-D and Sports Boats, and finally HKPN) at 5-minute intervals.

Race-1 Winners
“Hua An” took line honours and 1st place in the IRC-A followed by “Signal 8”, “Ambush” and “Vineta”. “FreeFire” although registered for the series did not take part on this first race day.

“Calamansi”, a new boat to the Hebe yacht races took line honours in IRC-D and came second on corrected time, but it was “St Happens” that took 1st place with “Taxi” coming in 3rd.

The spectacular “Brace Brace Brace” was 12 minutes ahead of the second placed boat “Black Magic” in the Sports Boat category, but this only gave “Brace” 6th place on corrected time. “Black Magic” took 1st, followed by “Sidewinder”, “Ricochet” and “Good Vibrations”.

Next Races
The next races in the Typhoon Series take place on June 22 when two geometric races will be held. This coming Saturday June 14 is the start of the Hebe Haven Summer Saturday Series.