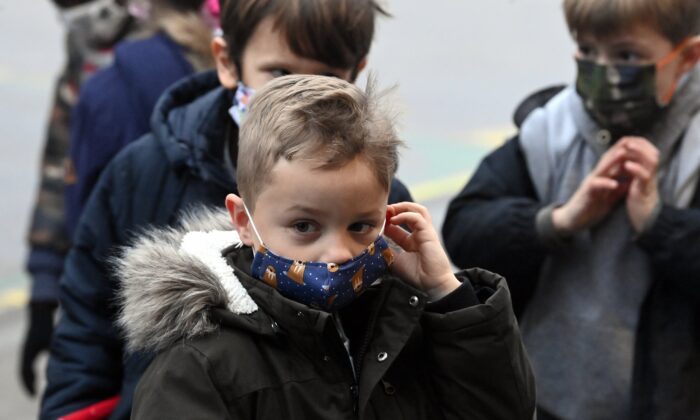 Children wear masks on the playground of a primary school in Helecine, Belgium, on Dec. 6, 2021. (Eric Lalmand/Belga Mag/AFP via Getty Images)
Viewpoints

Good News: Parents Reluctant to Give COVID Shot to Their Kids

If you watch Fox News or Newsmax and see the endless, repellent government-made commercials of frolicking children, smiling ear-to-ear, presumably because they have just been vaccinated against COVID-19, you could easily think, well, everyone’s doing it.

According to a KFF.org report dated Dec. 8 and based on the Centers for Disease Control and Prevention’s Data Tracker, only 16.7 percent of 5- to 11-year-olds have received at least one shot thus far. (72.2 percent of the general U.S. population have taken at least one dose.)

What accounts for this reluctance to vaccinate the young?

Maybe a little common sense laced with knowledge. You don’t have to have read one of the estimable books on the subject by Alex Berenson, Dr. Scott Atlas, or Robert F. Kennedy Jr.—although that would help—to realize something’s awry here.

Information appears to have filtered down, including, importantly, the microscopic percentage of children that actually die from the disease. Apparently they’re dying at a lesser, or close to the same, rate as the flu. In other words, minimal.

Does this merit taking on the risk of relatively untested, especially regarding the future, mRNA technology employed by the vaccines? It depends on which “expert” you believe—the man who told us we had two weeks to stop the spread and lied about his connection to the Chinese lab that may have instigated the pandemic in the first place, or the man who actually invented mRNA vaccines?

The latter, Dr. Robert S. Malone, has advised against giving the vaccines to anyone under 65, and 5 to 11 is a long way from that, because it’s a new medical technique and we don’t know enough yet about its long-range side effects.

One of those, of special importance to the young, is what the vaccines may ultimately do to their ability to procreate.

No wonder a fair number of parents are reluctant.

Many of these same parents may have taken the shot themselves, either by choice or because they were forced to by their employers. But they drew the line at their kids.

This has a telling similarity to the controversies surrounding our educational system, in which parents (especially the moms) are protesting the pervasive and rapidly expanding bias exemplified by critical race theory.

There, too, it was and is about the kids.

The left—in its alacrity to adopt what Mark Levin calls “American Marxism” and I would term, more cynically, “The Communism of the Rich”—has evidently gone too far by taking aim at the children.

This reluctance to vaccinate kids is good news (for now), but we are still very much in the midst of a struggle. The Biden administration has limitless funds, and when their propagandistic government commercials appear seemingly every 15 minutes on Fox and Newsmax, you know it’s far from over. It’s only just begun.

Further, in some states and locales, these vaccines may be administered without parental permission, a “happy accident,” so to speak. (“Oh, gee, we didn’t realize …”). Beware.

This is a battle for the hearts and minds of America, even more than during the Vietnam War, when we first heard that expression. Then, the communism, for the most part, was outside. This time, it’s inside.

To win this battle takes constant vigilance and, although there are many battlegrounds, the key one is those young people, for the obvious reason that they’re the future of our country, and therefore the world.

Their vaccination, while clearly questionable from a health perspective, acts as a “softening up” to the idea of government control from a very early age. Line up and get vaccinated, boys and girls. Under the cover of fighting COVID, fealty to the state is its most significant and enduring intent.

Another similar “softening up,” perhaps even more extreme with more direct impact, is the free Pre-K education by our government included in the massive “Build Back Better” proposal, all working, of course, from identical lesson plans. The Biden administration calls this “high-quality and developmentally appropriate curriculum.”