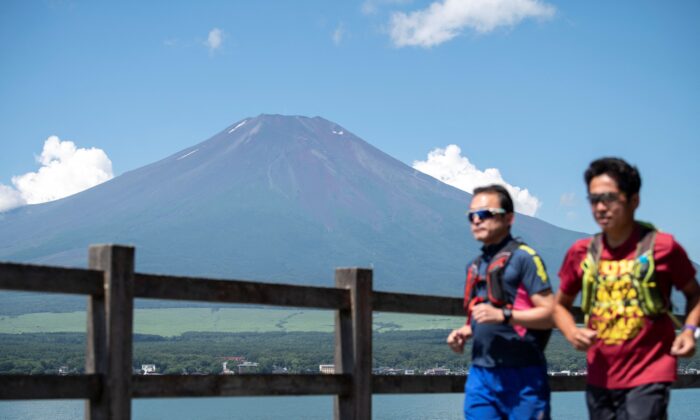 Two men jogging near the village of Yamanakako in Yamanashi prefecture, Japan, as Mount Fuji is seen in the background, on July 19, 2021. (Charly Triballeau/AFP via Getty Images)
Lifestyle

Japan is well recognized for the longevity of its citizens, which many believe can be attributed to Japanese diet habits and lifestyle.

Ryoto Sakaba and Professor Hiroyasu Iso of the Graduate School of Medicine, Osaka University, published a 20-year study in May that provided convincing evidence that the relationship between good lifestyle habits and longevity is directly proportional, indicating that even after the age of 80, both men and women can extend their lives by improving various lifestyle factors.

The eight lifestyle items the researchers identified included: eating fruit and fresh fish daily, consuming dairy products at least five days a week, exercising at least one hour or walking at least 30 minutes a week, drinking no more than two alcoholic beverages a day, not smoking, and getting 5.5 – 7.4 hours of sleep daily.

The research was based on a study initiated by the Japan Collaborative Cohort Study (JACC Study) that was sponsored by the Japanese government in 1988, with the participation of roughly 120,000 Japanese aiming to find factors contributing to mortality from cancer and circulatory disease.

According to the findings from the Osaka University medical group, for those who suffer from cardiovascular disease, cancer, hypertension, diabetes, kidney disease, and many other diseases—which are generally considered by the medical circle to be lifestyle-related, for example smoking or work over-loaded—life expectancy can also be extended by adopting a healthy lifestyle with noticeable results compared to the general population.

Such results tend to emerge more particularly in patients with comorbidities, commonly lifestyle-related diseases. Comorbity means the person has two or more diseases or medical conditions at the same time. For example, people with three or more comorbidities at age 50 can add 8.7 years to their life expectancy with lifestyle improvement, and if a 65-year-old tries improves their lifestyle, they may live 7.2 years longer and 3.8 years longer at age 80.

But, “improving and maintaining a healthy lifestyle cannot be counted as a substitute for treatment of related diseases,” researchers cautioned. “Importantly, people with lifestyle-related diseases are best served by rectifying their lifestyles along with ongoing treatment.”

“We hope that our research results will be a milestone not only in Japan but also in health care measures in other OECD countries in today’s world of aging and increasing lifestyle-related diseases,” said Ryoto Sakaba.

Weber Li contributed to this report.