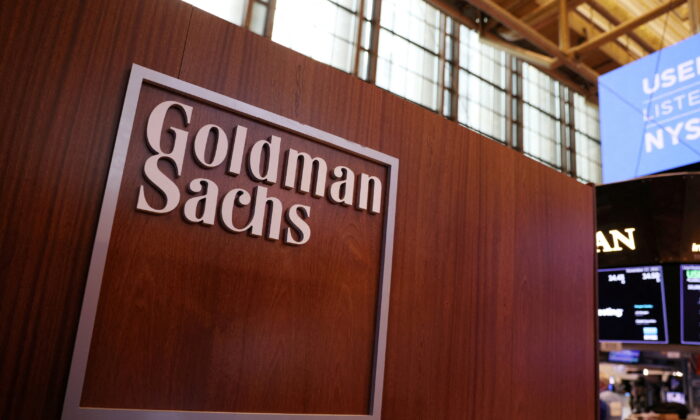 The logo for Goldman Sachs is seen on the trading floor at the New York Stock Exchange (NYSE) in New York City, Nov. 17, 2021. (Andrew Kelly/File/Reuters)
Companies

Goldman Sachs economists believe the chances of the economy entering a recession in the next two years are still low, even as the investment bank’s equity team has just released a recession manual for its clients on how to prepare for a downturn.

“A recession is not inevitable, but clients constantly ask what to expect from equities in the event of a recession,” chief U.S. equity strategist David Kostin wrote in a note to clients on May 19. “Our economists estimate a 35% probability that the U.S. economy will enter a recession during the next two years and believe the yield curve is pricing a similar likelihood of a contraction.”

Kostin pointed out that the latest rotations in the U.S. equity market suggest that traders are pricing growing odds of a recession that doesn’t mirror “the strength of recent economic data.” The research note cited that the dividend futures market suggests that S&P 500 dividends will drop by close to 5 percent in 2023.

“During the last 60 years, S&P 500 dividends have not declined outside of a recession,” Kostin stated.

According to Seeking Alpha, Goldman Sachs listed four key trends in the S&P 500 from past recessions to help navigate the financial market.

Across the 12 recessions the United States has weathered since World War II, the index has declined from peak to trough by a median of 24 percent, according to Goldman Sachs.

A decline of this magnitude would send the S&P 500 to approximately 3,650, the bank’s strategists wrote.

Since its peak in January 2022, the S&P 500 index has declined more than 19 percent, to nearly 3,870, and is on the verge of entering a bear market. The average decline of 30 percent would send the index to 3,360, according to Goldman Sachs, which is a decline of 14 percent from the current level.

Since 1948, the median decline in S&P 500 earnings from peak to trough during recessions has been 13 percent. Four quarters after bottoming out, earnings per share have recovered by a median of 17 percent, according to Goldman Sachs.

Looking ahead, analysts still don’t see a decline in earnings for S&P 500 companies. According to FactSet, analysts expect a profit increase of 10.1 percent for the calendar year 2022.

For the last 40 years, the S&P 500 forward price-earnings (P/E) ratio peaked eight months before a recession and tumbled 15 percent between the pre-recession peak and the start of the economic downturn.

The forward P/E ratio represents the company’s valuation relative to its future earnings. This allows investors to identify which stocks are overvalued or undervalued in comparison to their peers.

“The S&P 500 forward P/E multiple has contracted by a median of 21% between its pre-recession peak and its eventual trough,” according to Goldman Sachs.

Defensive sectors and ‘quality’ factors have historically outperformed during the year preceding a recession, according to Goldman analysts.

In the five recessions since 1981, energy, consumer staples, health care, and utilities have outperformed the index, on average.

In recent weeks, Goldman Sachs has presented many takes regarding a possible recession.

The bank says that the odds of a recession within two years is 35 percent, but two straight quarters of a GDP contraction is not its base case.

Goldman CEO David Solomon told CNBC that he thinks there is a “reasonable chance” of a recession, noting that he’s advising clients to be more conservative with their finances due to the potential consequences of the Federal Reserve’s tightening efforts.

“You have to think about the fact that there’s a reasonable chance at some point that we have a recession or we have very, very slow, sluggish growth,” Solomon said.

Solomon estimated that there’s a 30 percent chance of a recession in the next 12 to 24 months.

Soon after Russia’s invasion of Ukraine, Goldman Sachs downgraded its growth outlook for the United States and Europe, warning that the military conflict could send both economies into a recession.

“This forecast implies below potential growth in 2022 Q1 and 2022 Q2 and potential growth for 2022 overall,” Jan Hatzius, Goldman’s chief economist, wrote in March. “And we now see the risk that the U.S. enters a recession during the next year as broadly in line with the 20% to 35% odds currently implied by models based on the slope of the yield curve.”

Lloyd Blankfein, senior chairman at Goldman, said in an interview with CBS’s “Face the Nation” on May 22 that the United States is at a “very, very high risk” of a recession.

Although an economic slump is “not baked in the cake” and there is a “narrow path” to avert one, he recommended that companies and consumers be “prepared for it.”

Over the last month, other financial institutions have put forward different recession odds.