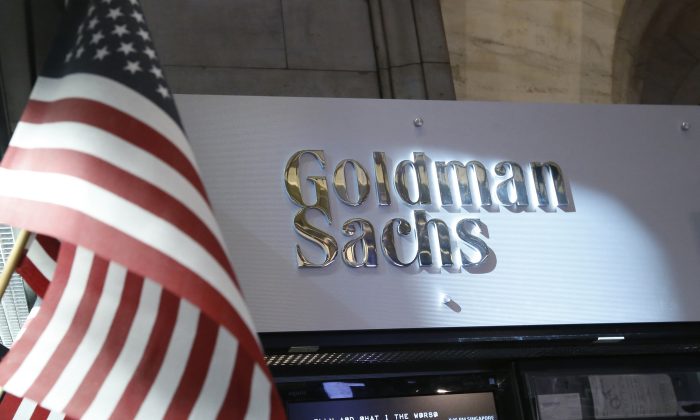 A view of the Goldman Sachs stall on the floor of the New York Stock Exchange on July 16, 2013. (Brendan McDermid/Reuters)
Russia-Ukraine War

Goldman Sachs is one of the first major global investment banks to exit Russia in the wake of its invasion of Ukraine.

A spokesperson for Goldman Sachs told The Epoch Times in a statement that it is “winding down its business in Russia in compliance with regulatory and licensing requirements” and is “focused on supporting our clients across the globe in managing or closing out pre-existing obligations in the market and ensuring the well-being of our people.”

According to Bloomberg, Goldman Sachs’ total credit exposure to Russia was $650 million at the end of 2021, most of which was tied to non-sovereign counterparties or borrowers, making it a relatively small market for the bank, which has $1.46 trillion in assets (pdf).

America’s largest bank, JPMorgan Chase, made a similar announcement March 10, stating it was “actively unwinding” its Russian business, citing “compliance with directives by governments around the world.”

JPMorgan Chase’s activities involving Russia will be limited to helping global clients with preexisting obligations there, and managing their Russia-related risks, the company told The Epoch Times.

The bank had previously announced a $5 million contribution to support humanitarian relief efforts in Ukraine, and company officials said they would continue to monitor the situation and “stay connected with employees in affected areas.”

A spokesperson from Goldman Sachs said: “Goldman Sachs is winding down its business in Russia in compliance with regulatory and licensing requirements. We are focused on supporting our clients across the globe in managing or closing out pre-existing obligations in the market and ensuring the well-being of our people.”

“In compliance with directives by governments around the world, we have been actively unwinding Russian business and have not been pursuing any new business in Russia.

“Current activities are limited, including helping global clients address and close out pre-existing obligations; managing their Russia-related risk; acting as a custodian to our clients; and taking care of our employees,” a spokesperson from JPMorgan told The Epoch Times.

While the majority of banks have a small presence in Russia, Citigroup Inc. has the largest footprint, with nearly $10 billion as of year-end 2021, The Wall Street Journal reported.

The company said March 9 that it is assessing its future in Russia and working toward an exit.

“As we work toward that exit, we are operating that business on a more limited basis given current circumstances and obligations,” the company stated.

“We are also supporting our corporate clients in Russia, including many American and European multi-national corporations who we are helping as they suspend or unwind their business. With the Russian economy in the process of being disconnected from the global financial system as a consequence of the invasion, we continue to assess our operations in the country,” Citigroup Inc. stated.

The multinational investment bank also said it has started humanitarian efforts on the ground and has donated $1 million from its foundation to a number of relief organizations and will match contributions from workers, which could add an extra $500,000 in donations.

In 2021, Citigroup Inc. announced plans to exit from its consumer franchises in 13 markets, including Russia.

While all three of the banks are preparing to cut ties with Russia, Deutsche Bank defended its decision not to do so, stating that it was “not practical” to cease operations in Russia.

Speaking to CNBC March 10, Chief Financial Officer James von Moltke said exiting Russia would “not be the right thing to do,” citing Deutsche Bank’s clients in the country.

“We’re there to support our clients. And so, for practical purposes, that isn’t an option that’s available to us. Nor would it be the right thing to do in terms of managing those client relationships and helping them to manage their situation,” Moltke said.

However, the CFO added that Deutsche Bank would reconsider its stance going forward if the political situation between Ukraine and Russia were to further escalate and its clients were to exit the country.