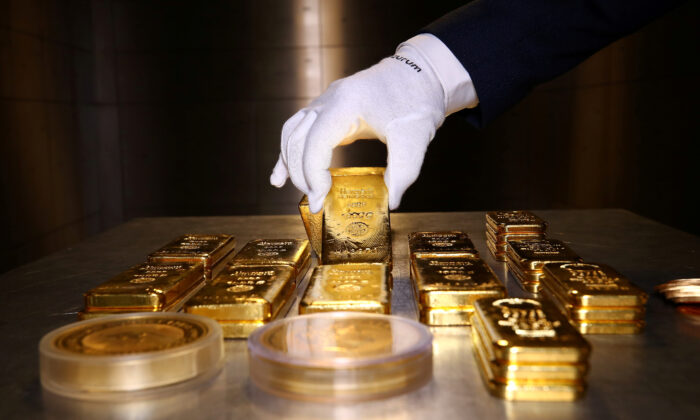 Surging inflation has pushed gold prices to near five-month highs, with Credit Suisse analysts predicting a more sustained move higher that could see the haven metal attempt a breakout beyond its $2,075 record high.

Spot gold prices rose sharply on Nov. 3, the day Fed policymakers capped a two-day meeting by saying they would start tapering their massive asset-buying program but broadly continue “accommodative financial conditions,” and again on Nov. 10, the day the Labor Department released data showing year-over-year inflation in October running at a near 31-year high.

On Nov. 15, the haven metal was hovering around the $1,860 per ounce mark, not far off its five-month high, with the recent leg up suggesting investors are betting that the current inflationary run-up will continue for some time.

“Gold continues to improve steadily and has now cleared key price resistance from the July and September highs and downtrend from August 2020 at $1,834 to establish a five-month base,” Credit Suisse analysts wrote in a note, cited by FX Street. “With the market also above rising short, medium and long-term averages evidence looks to be building we may be at the beginning of a more sustained move higher.”

Credit Suisse analysts said they expect gold to continue its bullish tendency and test the June high of $1,917, with a breakout above that level adding “further weight to our view with resistance then seen next at $1,959/77 and eventually back to the $2,075 record high.”

Inflation concerns have also sparked interest in the 30-year Treasury inflation-protected securities, whose yield on Nov. 9 fell to a record low of minus 0.57 percent, though it has since recovered some ground to minus 0.51 percent as of Nov. 12.

While Fed officials have maintained that the current bout of inflation is “transitory” and will abate once supply-side dislocations are smoothed out, Fed Chair Jerome Powell said at a Nov. 3 press conference that the central bank’s idea of “transitory” has evolved as upward price pressures have turned out to be more persistent than previously thought.

Former Treasury Secretary Larry Summers, who was early to sound the alarm on the current bout of surging prices, said in a CNN interview last week that he believes the labor market is tight and loose monetary policy is counterproductive.

The Fed has responded to surging prices by announcing a rollback in the pace of monthly asset-buys, one of the stimulus measures adopted in response to the pandemic crisis. At their most recent policy meeting at the beginning of November, Fed policymakers voted to taper their $120 billion in monthly asset-purchases—buying $10 billion less in Treasurys and $5 billion less in mortgage-backed securities each month.