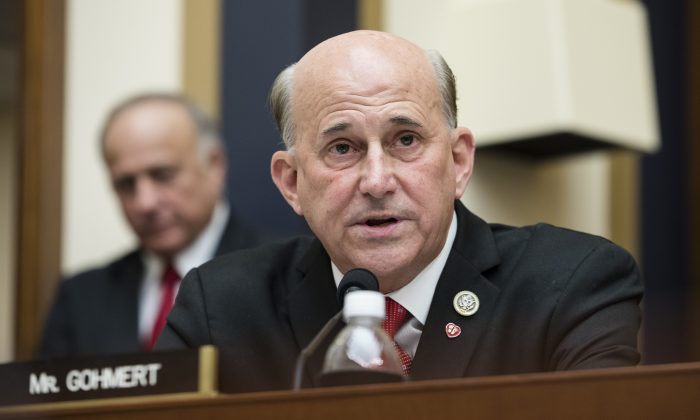 Gohmert on Lawsuit Dismissal: ‘If I Don’t Have Standing to Do That, Nobody Does’

Rep. Louie Gohmert (R-Texas) said late Friday, after a federal judge dismissed the lawsuit he and others filed against Vice President Mike Pence, that the ruling was wrong, and that he plans to appeal.

Gohmert “alleges at most an institutional injury to the House of Representatives,” Kernodle wrote. “Under well-settled Supreme Court authority, that is insufficient to support standing.”

Reacting during a virtual appearance on Newsmax, Gohmert said, “If I don’t have standing to do that, nobody does.”

Gohmert is one of roughly 40 Republicans who plan to object to electors during the Jan. 6 joint session of Congress, asserting some states’ electors are illegitimate because of alleged election fraud.

In a written statement, Gohmert added, “When no one ever has standing, what good is a court system?”

Kernodle also ruled that the other plaintiffs, Arizona’s Republican electors, claimed an injury that is not “fairly traceable” to Pence, the vice president. Gohmert said he also took issue with that aspect of the dismissal.

“The bottom line is, the court is saying, ‘we’re not going to touch this, you have no remedy.’ Basically, in effect, the ruling would be that you got to go to the streets and be as violent as an Antifa and BLM,” he added, referring to the far-left, anarcho-communist network and Black Lives Matter, which fueled violent riots over the summer.

Gohmert said lawyers representing the plaintiffs plan on appealing to the Fifth Circuit Court of Appeals.

“There are some incredible judges on that court,” he said. “And so we’re very hopeful that they will say, you know what, if our courts are not going to be useful in this dispute, and the litigant here is not going to have standing, and the defenders not appropriate, and the jurisdiction is not there, then we have no business having courts—we’re worthless.”

Gohmert and others sued Pence after failing to reach an agreement with his lawyers on whether the vice president has the “exclusive authority” to throw out electors from contested states. They argued that Section 15 of the Electoral Count Act is unconstitutional because provisions about dealing with competing electors violate the U.S. Constitution.

Both Pence and the House of Representatives asked the judge to reject the suit. Lawyers representing Pence argued he wasn’t the right defendant.

“The Vice President—the only defendant in this case—is ironically the very person whose power they seek to promote. The Senate and the House, not the Vice President, have legal interests that are sufficiently adverse to plaintiffs to ground a case or controversy under Article III. Defendant respectfully request denial of plaintiffs’ emergency motion because the relief that plaintiffs request does not properly lie against the Vice President,” they wrote in a filing.

House lawyers said the plaintiffs were trying to “overturn Congress’s centuries-old role in counting electoral votes and resolving disputes about them.”

The flurry of action doesn’t impact the planned objections to electoral votes. According to an Epoch Times tally, 40 representatives and representatives-elect plan to object, along with Sen. Josh Hawley (R-Mo.).

U.S. code outlines how to approach contests. Objections must be written and have the support from one member of each chamber. If they meet the requirements, an objection triggers a withdrawal from the joint session and a two-hour debate. To uphold an objection, each chamber must vote in the majority.