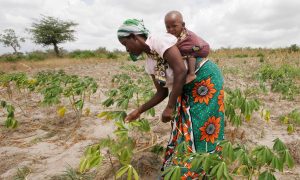 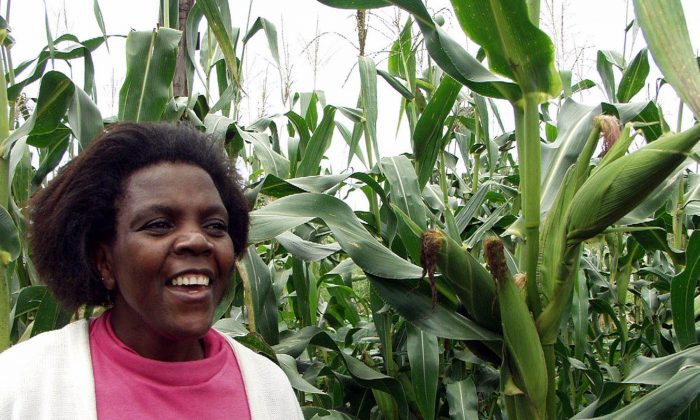 Fridah Sichalwe in her non-GMO maize field in Chibombo, 56 miles north of Lusaka, Zambia, in this 2003 file photo. Genetically modified foods have been banned in Zambia since 2002. (AP Photo/Salim Henry)
Africa

Zambia and three other African countries shocked the world in 2002 when they declined food aid during a regional famine. They wouldn’t accept the food because it was both genetically modified (GM) and unmilled, which meant that it could potentially be planted to grow GM crops. The four countries then asked the United States, which had provided most of the aid, to mill it so it would only be good for consumption and not cultivation, but it refused, citing costs.

When South Africa stepped in to mill it, three of the countries, Malawi, Mozambique, and Zimbabwe accepted. Only Zambia still refused, citing its genetic modification, which then-President Levy Mwanawasa called “poison.”

At the World Summit on Sustainable Development (Earth Summit 2002) in Johannesburg, Mwanawasa said, “We may be poor and experiencing severe food shortages, but we aren’t ready to expose our people to ill-defined risks. […] I will not allow Zambians to be turned into guinea pigs no matter the levels of hunger in the country.”

Around the same time, after Zambian scientists went abroad for a GM maize study mission, Zambia’s agriculture minister, Mundia Sikatana, told journalists in Lusaka, “In the face of scientific uncertainty, the country should thus refrain from actions that might adversely affect human and animal health as well as harm the environment.”

The importation ban of all genetically modified organisms (GMO) has been in effect since, with one exception of GM food aid being allowed in 2005. Zambia took heat for their strong anti-GMO stance from abroad initially, but now, much of the pressure to accept GMOs has subsided.

Roughly 85 percent of the Zambian population is in agriculture. Compared to neighboring countries like Zimbabwe, Zambia can provide much of its own food without aid from outside.

In fact, Zambia exports some of its maize to neighboring countries through the U.N. World Food Program (WFP). In 2012, Zambia sold 59,500 tons of non-GMO maize to the WFP. And in 2010, it exported 551,000 tons of non-GMO maize to Zimbabwe. “Most of WFP’s traditional food relief countries, in particular, insist on this kind of maize,” said Simon Cammelbeeck, the WFP director in Zambia, in an interview with his own organization in 2012. “The fact that Zambia is producing white, non-GMO maize has in a way created a niche market because few countries are able to meet the global demand,” he said. In other words, Zambia’s non-GMO crops are being embraced globally and benefiting Zambia.

In terms of Zambia’s relationship with European Union countries, the Zambian government fears EU countries would refuse Zambian crops for possible cross-contaminated with GMO grain. Although “Zambia does not, to any significant extent, export edible crops to Europe,” according to an article in Gastronomica written by Christopher Annear, it would still rather stay GMO free. Moreover, Zambia currently lacks the technology to test for GMO.

With its non-GMO maize in demand and fears of hurting EU relations, Zambia has global reasons to stay non-GMO.

The Zambian National Farmers Union (ZNFU), which helped to get GMOs banned in 2002 wrote on its website in 2010, “The ZNFU does not support GMOs because at the moment, there is no basis to support this kind of technology, but what the Union is advocating and calling for is the opening of the discussions and debate on the GMO technologies.”

According to the Post Online Zambia, Jervis Zimba, the union’s president, called for “exploring” GMO production starting with cotton.

Also in 2010, then-President Rupiah Bwezani Banda said that the government was ready to discuss and debate GMOs.

Current President Michael Sata, who succeeded Banda in September 2011, has in the past criticized the government’s reluctance to accept GMO, but like his predecessors, hasn’t done anything to allow GMOs into Zambia since coming to office.

So for the past 11 years, the Zambian government has maintained the strongest anti-GMO policy in Africa.

However, a government policy for researching and building an industry to grow and process GMO has been in place in Zambia since 2003, but officials at the Ministry of Science, Technology, and Vocational Training (MSTVT) have maintained a strict non-GMO stance, according to Emma Broadbent, a policy researcher based out of London. “Director Jane Chinkusy was particularly keen to counter claims in the media that the government was ‘opening’ up the debate,” she wrote in her 2012 research paper.