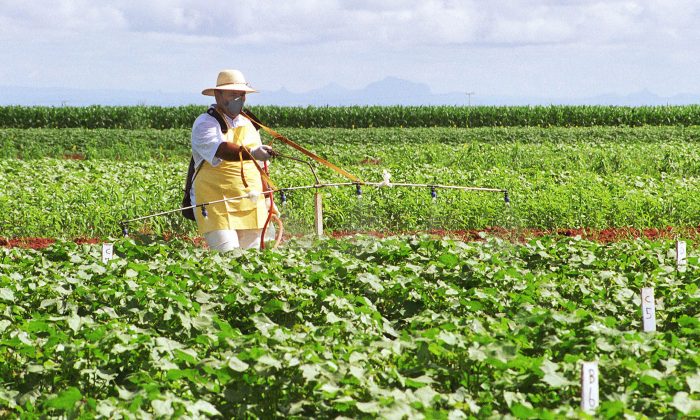 A farmer sprays a transgenic soybean plantation in Mato Grosso do Sul, central Brazil in 2004. Agribusiness consultancy agency Céleres reports that 88.8 percent of soybeans grown in Brazil, many of which are exported around the world, are genetically modified--though the use of GMOs in Brazil is not without critics. (Monalisa Lins/AFP/Getty Images)
Americas

RIO DE JANEIRO—Brazil is the second largest producer of genetically modified organisms (GMOs) in the world, behind only the United States. Brazil has about 37 million hectares (92 million acres) of land planted with GM crops, according to agribusiness consultancy agency Céleres (pdf).

That is more than half of the 67.7 million hectares (167.3 million acres) used for agriculture in Brazil overall, according to the 2013 estimates of the Brazilian Institute of Geography and Statistics.

The use of transgenic products in Brazil began in the early 1990s, when farmers from the south began to cultivate genetically modified soybeans imported from Argentina. The government began regulating the product commercially in 1995.

The sale of GMOs was banned in 1998 due to a lawsuit by the Brazilian Institute for Consumer Defense. But in 2003, the government again permitted the marketing of GM products with regulations. In the same year, the Brazilian government issued the Labeling Decree (4680/2003), which requires producers and sellers to identify on food packaging products that contain more than 1 percent GM raw materials.

In March 2005, the Bio-Safety Act (11.105/05) went into effect, allowing the use of transgenic organisms without studies on the environmental impact. The act also outlined regulations for biotechnology research and created the organization that oversees this regulation, the Brazilian Technical Committee of National Biosafety (CTNBio).

Brazil has more varieties of GM soybeans than any other crop—a popular crop for export around the world. Céleres reports that 88.8 percent of soybean crops cultivated in Brazil in 2012–2013 were GM.

Is GMO necessary in Brazil?

Francisco Aragão, a researcher at the state-run Empresa Brasileira de Pesquisa Agropecuária (EMBRAPA, Brazilian Enterprise for Agricultural Research), said Brazil needs to use more biotechnology, such as GM, to increase productivity, improve growing conditions, and reduce production costs. EMBRAPA is the research arm of the Brazilian Ministry of Agriculture, Livestock, and Food Supply.

“There are some problems that conventional methods cannot solve,” Aragão said. He noted the importance of agriculture as not only a source of food, but also of biofuel, textiles, and pharmaceuticals.

Sarah Agapito, agronomist and researcher at the Federal University of Santa Catarina, disputes the idea that GMOs increase productivity or reduce the use of pesticides.

She gave the example of Roundup-Ready (RR) soybeans. Roundup is a herbicide created by agriculture giant Monsanto. Its principal ingredient is glyphosate. The RR soybeans are genetically modified to be glyphosate resistant, so farmers can douse the crops with Roundup and only kill the weeds.

“There is already scientific evidence that the production of RR soybeans has contributed to the emergence of weeds resistant to glyphosate,” Agapito said. She said farmers end up with additional costs, needing to apply more Roundup or other herbicides.

Flavio Finardi Filho, president of CTNBio, said the use of GM seeds is essential, because Brazil’s tropical and humid climate makes it especially susceptible to pests. Plants can be genetically modified to make them resistant to pests and climate conditions.

He said in the last 15 years, agriculture has accounted for approximately 15 percent of the Brazilian GDP.

“Undoubtedly, the competitiveness of agribusiness [relies on] adoption of transgenic as an alternative to overcome limitations and to add new features to agricultural production,” Finardi Filho said.

Gabriel Bianconi, a researcher at ASPTA (Advisory Services for Projects in Alternative Agriculture), said researchers are worried GMO production could lead to the further dominance of a few companies in the global seed market, the contamination of non-GM crops, and the increasing difficulty of producing GM-free crops. ASPTA is a nonprofit that supports family agriculture and sustainable rural development.

Studies in Brazil on the Effects of GMO Food

Brazilian studies on the human health effects of GMOs are few.

Maria Clara Coelho, a doctoral student at the Brazilian National School of Public Health did a study on the studies.

She reviewed the portals of the Scientific Electronic Library Online (SciELO) and of the Coordination of Improvement of Higher Education Personnel (Capes). Of 716 articles on GMOs, only eight explore the issue of food safety.

The study concludes that the eight analyzed studies do not approve genetically modified foods as safe, but rather raise concerns about the safe consumption of such foods.

Coelho asked, “What studies provided the basis for the permission of CTNBio for commercial release of GMOs if in the sample [studies] analyzed by us all claim that such foods are not safe?”

According to a report published by human rights advocacy group Earth of Rights in 2011, the evaluations made by CTNBio to check the safety of GMOs in relation to the risks to the environment and human health are kept confidential.

The Epoch Times called CTNBio twice to request information on the studies it has performed. CTNBio asked the Epoch Times to inquire via email. It did not respond to the Epoch Times email within the three weeks preceding the publication of this article.

Professor Rubens Nodari of the Department of Plant Science and Laboratory of Physiology and Genetics of Development at the Federal University of Santa Catarina, said such information is lacking in the country because: “Obviously the companies want to keep the monopoly. But they can only achieve that when governments are subservient.”