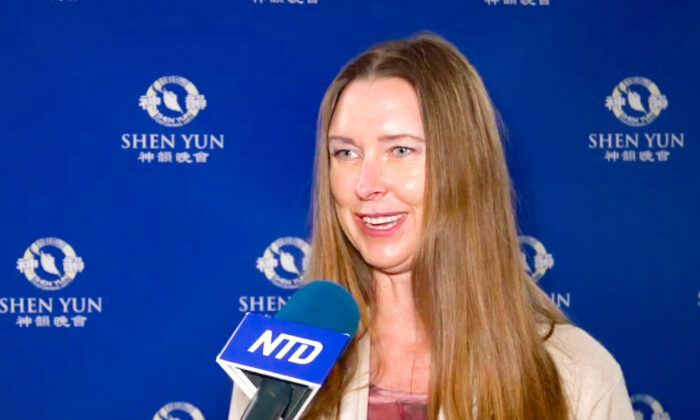 COSTA MESA, Calif.—Marie Huitsing, a global media operations manager at Netflix, was amazed by what she saw at the Shen Yun Performing Arts performance at Segerstrom Center for the Arts on May 14.

“I thought it was incredible … The way the dancers just incorporate all of the elements into their movement, the use of the costumes, and the fabric were incredible. I was so enchanted by what they did,” Ms. Huitsing said.

New York-based Shen Yun is the world’s premier classical Chinese dance company. Along with folk dances and solo performances, the production depicts story-based pieces that tell tales from ancient times to the modern-day.

Ms. Huitsing was very impressed with the dynamism of classical Chinese dance. With its flips and gentle elegance, it has become one of the most expressive and athletic dance systems in the world.

“What they do is so dynamic, with mixing the gymnastic form in and the use of their costumes to really illustrate the depth of the movement,” she said.

“There was one particular act where they had the elongated sleeves, and that just added so much extension to the movement in a way that I’ve only seen rhythmic gymnastics dancers do, so that really caught me.”

Shen Yun’s story-based dances depict cherished tales from the past. According to the company’s website, the presented heroes embody the most exalted virtues of Chinese civilization and convey morals still relevant today.

“You can see [virtues] in some of the different pieces—how they mentioned the importance of compassion … patience, and kindness,” she said. “So that was a really important message to take with the stories.”

“There was just so much richness in each of the acts that really came through not just with the dance, but I think how the music also combined with the two,” she added.

Ms. Huitsing was amazed by the tonal variations of the Chinese erhu. With only two strings, this 4,000-year-old instrument has the ability to mimic the human vocal cord.

“The range that she was able to achieve on that was incredible! So much talent!”

“I think live music is always important because it just fills your spirit. You can feel it in your body as you’re listening to the performance,” she said.

Ms. Huitsing was blown away by the company’s patented method of integrating a 3D animated backdrop with the stage performance. It allows the performers to remarkably travel back and forth between the stage and the background projection.

“The way they bring the screen to life with the dancers was something really unique,” she said.

“I’m curious to come again next year! [Shen Yun] said they change the program every year and I cannot imagine that because I can see the amount of work that went into this: the costumes, the choreography, the sets … it’s just a tremendous effort,” she said.